You know that weird sensation you get when you can feel someone’s eyeballs on the side of your head? I felt that, and felt it often whenever I was driving down the street - in a Hyundai.

This is a special Hyundai, though. An elegant, sophisticated-looking Hyundai. A practical, comfortable Hyundai. But most importantly, a very fuel-efficient, hybrid Hyundai. That’s right, I’m talking about the 2016 Sonata Hybrid.

Announced at the North American International Auto Show at the beginning of the year, the Korean automaker takes the seventh-gen version of the mid-size sedan and adds a few visual and aerodynamic bells and whistles along with revised internals that improves upon fuel economy by 10 percent compared to the outgoing part-electric model.

Some of those exterior enhancements include a literal facelift: a larger grille now features chrome slats with an embedded emblem; the bumper has a built-in front splitter with slimmer fog lamps integrated into the air intakes; the headlights and taillights have been redesigned for a sleeker look. The five-spoke “blade” wheels are also unique to the hybrid variant, as are two new colours including the Graphite Blue Pearl that was sprayed on my Limited trim test vehicle, and a nifty off-white Seaport Mist.

The inside feels much more luxurious than what would be expected from its starting price point of $29,649. An available panoramic moonroof spans almost the entire area above your head, and all the materials have a quality feel to them. Even the seatbelt buckles are hefty, so much so that when I was driving with the front windows down, the passenger-side unit would cause a ruckus while it flopped around against the b-pillar from the wind buffeting. 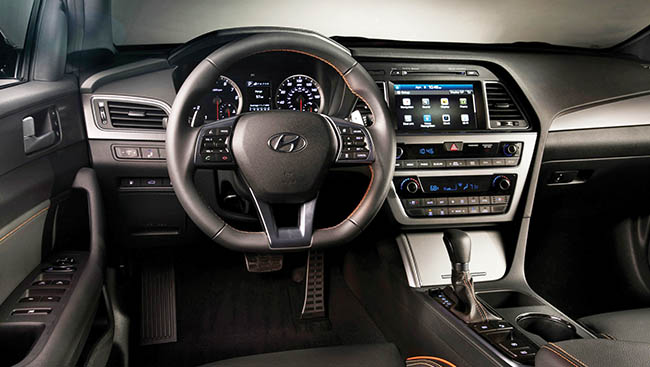 Hyundai says all the changes have lowered the vehicle’s coefficient of drag to 0.24, identical to the Tesla Model S. The car looks long and stretched out, which is no illusion. This Sonata has grown by 34 millimetres in length and 10 mm in width, giving passengers more lounging room. In addition, a uniquely shaped lithium-ion battery pack is able to rest underneath the trunk floor giving full use of the cargo area and even allows the rear seats to fold. People who have driven other hybrids on the market with compromised trunk space will acknowledge this as a rare and celebrated feature.

What has shrunk, however, is the engine displacement from a 2.4-litre to the current 2.0 L found in the “Nu” four-cylinder Gasoline Direct Injection (GDI) powerplant. A lighter, heartier 38-kilowatt electric motor helps the sedan achieve a net horsepower of 193. For the best performance response, you can activate Sport mode providing additional get-up-and-go, but the sound entering the cabin at the peak 6,000-rpm power band does err on the side of whiny.

The manufacturer’s estimated fuel economy rating in mixed city and highway driving is approximately 5.6 L/100 km, and although I wasn’t able to quite match that figure, I still achieved a better than expected 7.0 L/100 km, especially for a car of this size.

The 2016 Hyundai Sonata Hybrid is available in stores now, with a plug-in version to follow shortly.