Ghai has spent a decade at the helm of various Michelin-starred Indian kitchens - having honed his craft at some of the most prestigious hotels and restaurants inIndia - including The Oberoi Group and the The Taj Hotels.

Michelin-starred chef and restaurateur Rohit Ghai is hailed as one of the UK’s most creative and accomplished Indian chefs. Ghai has spent a decade at the helm of various Michelin-starred Indian kitchens - having honed his craft at some of the most prestigious hotels and restaurants in India - including The Oberoi Group and the The Taj Hotels.

Chef Ghai began his international career working with Michelin-starred restaurant Benares in London in 2008. He then moved on to lead several other Michelin-starred kitchens, including multi-award winning Gymkhana, Trishna, and the JKS Group, where he developed innovative menus and became accomplished in all areas of operations, recruitment and managing teams across different sites. He then went on to launch the Leela Groups’s first London venture, Jamavar, in 2016, where he became the fastest Indian chef to win a Michelin star - being awarded the accolade within 10 months of the restaurant’s opening. Ghai then opened Bombay Bustle to critical acclaim. 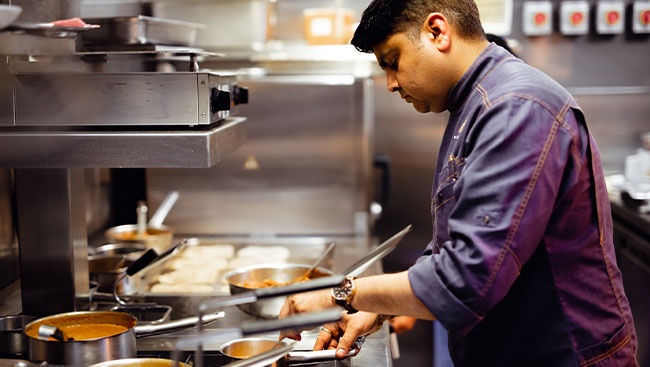 His creative and refined cooking has been applauded by celebrities, dignitaries and food critics. His revolutionary, precise and beautifully presented cooking regularly received praised from media. He has been featured in BBC Good Food, Foodism, and Daily Telegraph. Chef Ghai is also often invited to appear on television. He has featured on high profile shows including BBC One’s MasterChef and Channel 4’s Tricks of the Restaurant Trade. He recently released his first cookbook titled, Tarkari: Innovative Vegetarian and Vegan Indian Dishes with Heart and Soul.

Chef Ranveer Brar on food cultures of India and Pakistan

In the series, Brar talks about how India and Pakistan share a lot of commonalities ranging from history, culture, language, and cuisine, how food has the power to blur the differences between the countries.

Chef Ranveer Brar on food cultures of India and Pakistan

With Justin Narayan, an Australian youth pastor of Fiji Indian origin, becoming the second person of Indian descent to win MasterChef Australia, wowing the judges with his Indian take on chicken tacos, it's now official: Indian flavours have arrived and are there to stay in Oz.

In his most trending show, Kitchen Magic, he brings professional and innovative global cooking techniques to the home kitchen.

Reputed for his constant innovation in the world of gastronomy, he is a name to reckon with in the national and global hospitality and culinary industry.

Inspired by these experiences and demonstrating a natural flair for flavour combination, Chef Kumar opened his first restaurant, Abhi's in North Strathfield