Scratching your head on what to get the audiophile in your life this holiday season? We’ve rounded up four of the latest and greatest gift ideas for that special music lover.

There are a lot of Bluetooth speakers on the market, but few are as stylish as the retro-inspired Marshall Kilburn. The 55-year-old UK-based business is famous for their amplifiers, and the influence shines through here in the design. Resembling a miniature amp with the iconic gold script badging and guitar-like carrying strap, the unit possesses a four-inch woofer and two quarter-inch dome tweeters generating dynamic low and high-range sound. Up to 20 hours of wireless playback is possible, and a double-ended coil cord is included for those that like to plug-in their music.
Measuring 242 millimetres long, 140 millimetres wide and weighing in at three kilograms, settings for the Kilburn is adjusted via a top panel consisting of bass, treble and volume knobs, an on/off toggle switch and buttons to pair and wake the device. When the battery runs out, simply attach the bundled power cord. Available in black or white. 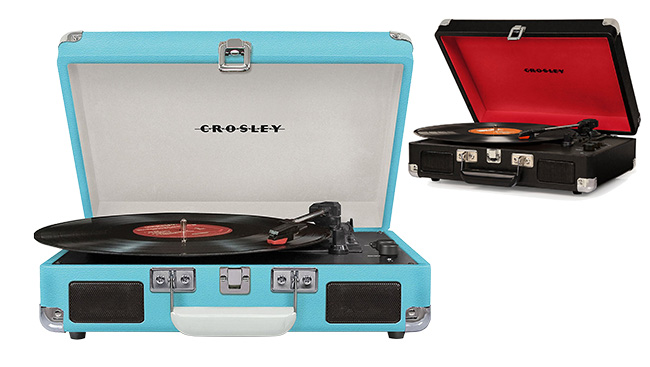 In case you haven’t noticed all the records – yes, vinyl records – on sale at big retailers like Walmart and Winners, the vintage audio medium is back in a big way. Crosley was one of the first companies to lead the resurgence releasing affordable, all-in-one turntables that featured built-in speakers and folded up into a briefcase for easy carrying. They’ve done it again by releasing a deluxe version of the popular Cruiser model.
This new addition now incorporates Bluetooth connectivity so playback can be streamed directly to a smartphone or compatible external speaker. The usual RCA audio and headphone jacks are still present for alternative listening methods. The Cruiser Deluxe can play 33 1/3, 45 and 78 rpm speed records and is vinyl wrapped in an assortment of fun colours to choose from.

Beats audio products look as good as they perform, but that is probably why a pair costs as much as they do. The EP line-up of wired headphones looks to change it up by offering the clear, bass-y output the brand is known for at a more reasonable price point. Although entry level in positioning, quality hasn’t been compromised – the ear pads are soft and comfortable, mounted onto elegant metal arms featuring a cushioned headband.
At the other end of the lengthy cable is a traditional 3.5 millimetre connector ready to plug into your mobile device (sorry newer iPhone owners), and the inline mic and volume control enables headset mode to take phone calls. The EPs come in black, white, red and blue and include a soft carrying case. Initially launched last year, they can now be found at a discount from select retailers.

Wouldn’t it be cool if you could stuff a set of drums into a backpack or bag? With BopPad, you can. Produced by BeBop Sensors, a company specializing in smart fabric technology, and Keith McMillen Instruments, this little invention can interpret a variety of drumming styles like soft finger taps or full stick hits. The 10 inches of circular strike-able surface area has a 2.4 milliseconds response time providing a truly expressive and natural sounding experience.
BopPad hooks up to an iPad or computer via a USB cable and is ready to go after downloading the iOS or desktop software, which also allows users to program different behaviour from four independent zones. Drumming sessions can be played back and saved, making it a great tool for both beginners and professionals. When unplugged, it functions great as a practice pad with realistic feel. Available on Kickstarter, the campaign goal was reached after only three days.
Prev Next

Back to School Tech Accessories

Here is the hottest tech out right now to get you back into the educational mood.