In an exclusive interview with DARPAN, Dr. Inderjit Kaur, president of All-India Pingalwara Charitable Society, talks about the inspiring life of Bhagat Puran Singhji, the significance of Khalsa, and the several humanitarian works done by Pingalwara Society.

‘The best way to find yourself is to lose yourself in the service of others.’ This Mahatma Gandhi quote resonates well with the warm, affectionate, and ever-smiling – Dr. Inderjit Kaur. A doctor by profession and human by conduct, Dr Inderjit Kaur has spent her lifetime working diligently towards the betterment of society. Fondly known as Bibi, the septuagenarian is the ‘Mukh Sewadar’ (president) of the All-India Pingalwara Charitable Society, Amritsar, and recipient of numerous honours, awards and distinctions in India and abroad, including the prestigious Padma Bhushan Award, the third-highest civilian award in the Republic of India. 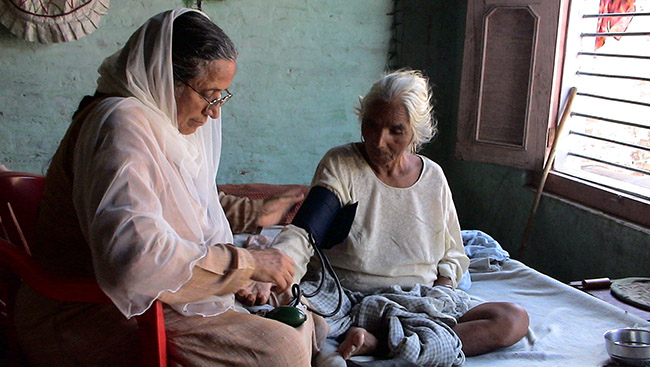 Talk about her incredible philanthropic journey, and with complete humility, she credits it all to her mentor — Bhagat Puran Singhji — the founder of All-India Pingalwara Charitable Society. “I am here because of him. Bhagat Puran Singhji was such a remarkable soul. I am so fortunate to have been blessed by such a noble soul. He believed God resides in everything, he was showed great compassion towards everyone. He would even pick up stones, thorns from the path so that no pedestrian should get hurt. He had great worry about the environment and used to be concerned about even a single blade of grass. So, compassion, love, humbleness – he had all the qualities of a great human being. He was pious and religious. I was greatly influenced by him and used to visit Pingalwara often in those days, but at that time I never thought that one day he would make me his successor and make me the Mukh Sewadar of Pingalwara,” says Bibi Inderjit Kaur, who has been greatly influenced by the work and life of Bhagat Puran Singhji. 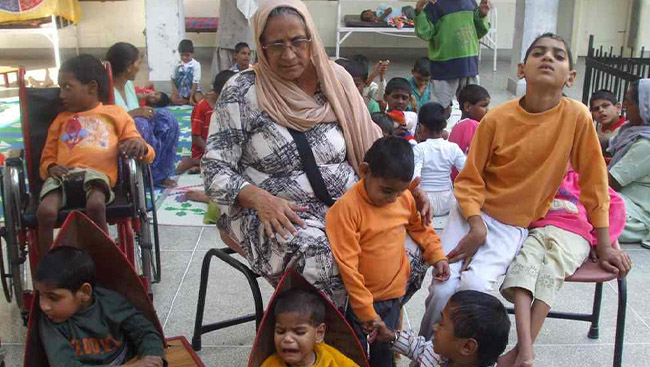 She recalls, “My father, Dr. Harbans Singh, used to have the donation box of Pingalwara Society. And we also used to get Bhagat Puran Singhji’s leaflets and newsletters regularly. Bhagatji cared deeply about the environment, people and education so, he started a printing press and used to print a lot of literature to spread awareness. I started reading his literature and papers, and I was very much impressed by him. There was this one thing he had written, which made a huge impression on me, he had written — ‘It is not the profession that makes the dignity of man, it is the man who makes the dignity of the profession.’ I was completely in awe of him and had a strong desire to meet him. So that is how I came across him and his works.”

One wonders, if that was the moment when she decided to dedicate her life to social service? After a thoughtful pause, Bibi says, “I was born in a Sikh family, and the greatest virtue of Sikhism is Sewa and Simran, which are practised by all Sikhs. So that was already inculcated in me since I was a child. My father also used to practice that, he used to feed the poor people, give medicines to them… so that intention was already there. But I never thought I would come to Pingalwara and do this work. I was attached to Pingalwara, and like anybody else, I thought I would do monetary help at Pingalwara.” 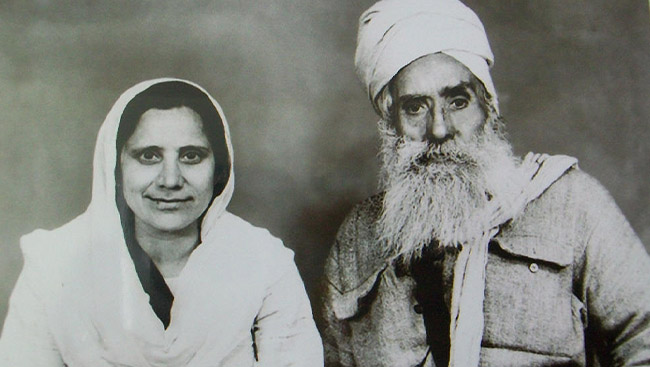 But destiny definitely had other plans for Bibi. She adds, “After my father passed away in 1975, I needed spiritual and emotional guidance from Bhagatji, and he not only adopted me but my whole family and became a part of our family. Thereafter, I started visiting Bhagatji occasionally, and when he fell ill, as his adopted daughter, it was my duty to come and look after him. I stayed with him in the hospital for nine days. I was doing my professional work at that time in a clinic in Sangrur. I was the only working member of my family at that time, so Bhagatji told me not to come, he didn’t expect anything from anybody. But I was adamant, and I wanted to take care of him. So that is how my association with him began. In 1986, he made me a member of the Pingalwara Society, later in 1987, he made me the vice president and then, he must have seen something in me, that he wrote my name as his successor in his will. In 1992 when he left for his heavenly abode, the responsibility of Pingalwara came on my shoulder.”

Pingalwara literally means – a home for the crippled, and was founded in 1947, by Bhagat Puran Singhji. The word ‘Pingal means ‘cripple’ and ‘wara’ means ‘home.’ Today, this institute which is run by Dr Inderjit Kaur has enlarged its sphere of activities, and is not only providing shelter to the destitute but also provides medical facilities, runs free schools, shelter homes for children, and is involved in several other humanitarian activities.

Highlighting some of Pingalwara’s welfare activities, Dr. Inderjit Kaur says, “Originally Pingalwara was home for destitute in Amritsar. Today we have over ten centres that are dedicated to human service. We have a dispensary where we provide free medicine and treatment to the ill. We have nurses and doctors who work round the clock to look after the patients. Many of these are suffering from chronic or incurable diseases and are going to spend their entire life in Pingalwara. We have a shelter for mentally challenged kids and old people. We have a drug rehabilitation centre. We have a prosthetic centre, we look after HIV patients, we have children who are physically handicap, mentally handicap. Earlier, there was no school for such children, so we started special education schools for them. Bhagatji always believed that until the poor don’t get proper education, their state won’t improve, so at Pingalwara we run five schools that provide free education.” 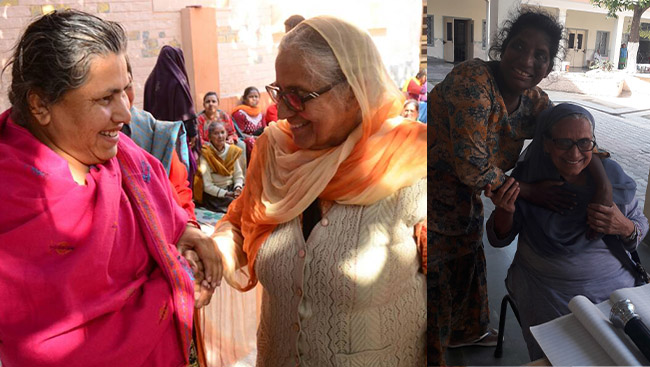 Apart from healthcare and education, Pingalwara Society has also taken forward Bhagatji’s concern for the environment by starting nursery and unique projects like natural farming.

Bibi explains, “Bhagatji was very much worried about the environment, pollution and depletion of natural resources. He planted many trees. To continue that work, Pingalwara plants saplings every year. The society has its own nursery where over 60,000 saplings are distributed free of cost every year. During the last 15 years over 9 lakh trees have been planted all over Punjab.” She further adds, “Once we attended a seminar, where we learnt that the chemical fertilizers and pesticides used during farming causes cancer, female fetal loss, adverse effects on children’s mental health – so we started with this low budget natural farming. These farms are demonstration farms where cultivation is done without the use of any pesticide. Even Barack Obama was supposed to visit our farms during his visit to India in 2010, but due to some reasons, he couldn’t. However, preliminarily teams from White House and a team from US Embassy had carried out familiarization and security survey of our Dheerekot Farm and Manawala Complex.” 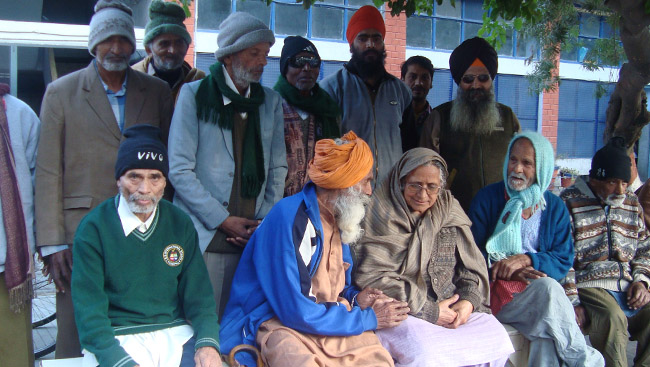 Pingalwara Society is also actively supporting the ongoing farmers’ agitation in Delhi against the three agriculture laws. A team of doctors sent by the Pingalwara Charitable Society is continuously providing medical services to the protesting farmers in Delhi.

Dr Inderjit Kaur says, “They are right our government is planning to do everything for the capitalist. The government is not bothered about the poor people. Labour laws have been abolished, a lot of people are unemployed… there are so many problems in India at this time, which is worrying me. I am very much worried about my country. Poor people shouldn’t die with hunger. We should think about the poor people we should think about our country, we should love our country… but loving our country doesn’t mean we should go for war and all that… loving, means even one blade of grass should not be destroyed.”

Ask her how can we transform this lack of compassion and sensitivity in society today, and she replies instantly, “People who are compassionate, who have love for the poor, they must stand up for the right thing and should not be afraid of anything.” 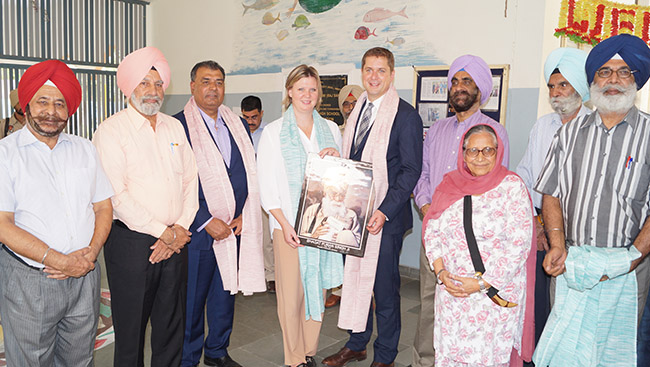 With Vaisakhi around the corner, we ask Bibi if she has any special message to share and pat comes the reply, “Vaisakhi is a beautiful festival and also holds a lot of significance. During the Vaisakhi festival, Guru Gobind Singhji initiated the Khalsa Panth. The main essence of the Khalsa is Sant and Sipahi, and we all should be saint and soldiers of our country.”