While the apology marks a historic and significant moment in Canadian history and can be seen as a step forward, this does not and should not close the chapter on the Komagata Maru.

On May 18, 2016, Prime Minister Justin Trudeau formally apologized in the House of Commons for the Canadian government’s decision to deny Sikh, Muslim, Hindu passengers and crew aboard the Komagata Maru from entering Canada in 1914. Their denied entry was based on the “continuous passage” regulation, which was designed to curb immigration from India.

The ship arrived in Vancouver, BC on May 23, 1914 and was forced to depart two months later, while a legal battle ensued. The vessel chartered by Gurdit Singh, carrying 376 passengers (all British subjects) was bound for what they thought would be a new life in Canada. My great grandfather, Harnam Singh Sohi, was one of those passengers. For two months, my great grandfather and his fellow passengers were denied food and water, and their requests to officials were repeatedly ignored. Provisions were minimal and passengers were living meal to meal.
The denial of these passengers from entering Canada, and the Komagata Maru story is one of great importance because it reflects a deliberate, exclusionary policy of the Canadian government to keep those they deemed unfit from entering the country. These racist and ethnocentric views stemmed from Canada wanting to remain a “White Man’s Country.”

Komagata Maru passengers were challenging the Continuous Passage regulation that stated immigrants must “come from the country of their birth, or citizenship, by a continuous journey and on through tickets purchased before leaving the country of their birth or citizenship.” This regulation had been brought forward in 1908 in an effort to curb Indian immigration to Canada. As a result, only 20 returning residents and the ship’s doctor and his family were eventually granted permission to disembark.
On July 23, 1914 the Komagata Maru was forced to lift its anchor and was escorted by the HMCS Rainbow to leave the Vancouver harbour and return to Asia. Upon returning to Calcutta (now Kolkata), 19 passengers were killed and many others imprisoned. Fortunately, Harnam Singh safely returned to his village in Punjab unharmed, but the internal wounds he experienced aboard the Komagata Maru stayed with him forever. Like many of his fellow passengers, Harnam Singh sought to come to Canada for an opportunity to work and to provide his family with a better life. 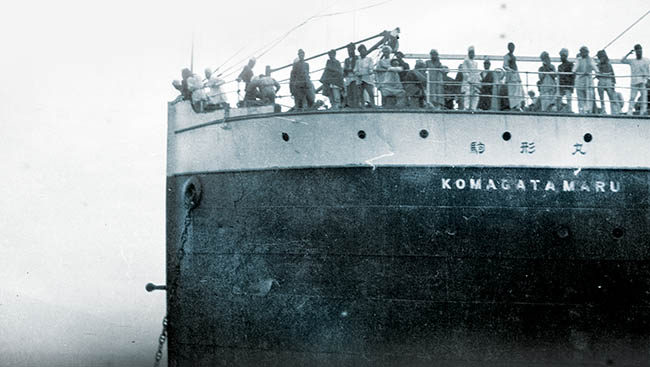 I was present on May 18, 2016, to witness Prime Minister (PM) Justin Trudeau’s formal apology in the House of Commons, and I went in honour of all the passengers that are no longer with us today and for those who truly deserved this apology. I held back tears during the apology as I reflected on how the Komagata Maru passengers and crew may have felt 102 years ago. PM Justin Trudeau stated, “Just as we apologize for past wrongs, so too must we commit ourselves to positive action – to learning from the mistakes of the past, and to making sure that we never repeat them.” While the apology marks a historic and significant moment in Canadian history and can be seen as a step forward, I strongly feel this does not and should not close the chapter on the Komagata Maru.
Until very recently, there was little work done by our provincial and federal governments to tell the history of the Komagata Maru in the context of Canadian history. I’m embarrassed to say, I too didn’t learn about the Komagata Maru incident until I was a first year student at the University of British Columbia, almost 20 years ago.

My grandmother passed soon after I learned of our family connection, which denied me the chance to learn about it directly from her. However my father and his siblings spent time in India with Harnam Singh when they were younger and were able to listen to his story first-hand.
Even though Harnam Singh experienced the tragedy directly, including the poor conditions on the ship and the open-fire upon returning to India, he never faltered from his dream to bring his family to Canada. He himself refused to return to Canada, but was able to secure his daughter Gurnam Kaur’s marriage to Rattan Singh Ghuman, a man who had already settled in Canada. Rattan Singh’s father, Daya Singh Ghuman was one of the fortunate Sikhs that immigrated to Canada in 1906 and worked in the Fraser Mills. Through this marriage, Gurnam Kaur was able to sponsor her siblings and their families to Canada.
All Canadians were directly affected when the Komagata Maru was turned away. This is not simply a South Asian story, but one that affects our entire nation. During the apology, PM Justin Trudeau explained, “The very makeup of this House should remind all of us that when we have the choice between opening our arms to those in need or closing our hearts to them, we must always choose the more compassionate path.”

However, what is the point of this apology, if vulnerable communities today, continue to face exclusion, discrimination and racism in Canada at the hands of our federal and provincial governments? As a nation, we need to stand up for those seeking asylum in Canada, temporary foreign workers, immigrants and migrant communities. These people today are also seeking freedom and opportunity similar to those 376 passengers abroad the Komagata Maru in 1914. This apology is meaningless unless there is a sincere approach towards redress and empathy for Canada’s most vulnerable and marginalized.
For the South Asian community, the Komagata Maru is symbolic. It is symbolic of discrimination and of advocacy. It represents how the community rallied together to challenge injustices. There needs to be further research and access to materials at all education levels. We need to continue to talk about the Komagata Maru and what it represents to Canada. We must also demand for K-12 curriculum development and resources to ensure this historic moment is recorded as part of Canada’s narrative.

Sukhi Ghuman is a former television host and reporter, who currently works as a Marketing and Events Manager at the University of British Columbia. Sukhi has been a Board of Director of the Vancouver International Bhangra Celebration (VIBC) Society for the last 12 years, and is the co-founder of the Be Your Own Best Friend (BYOBF) Network, Canada’s first professional networking group for South Asian women.  She is also a Vancouver based photographer specializing in lifestyle photography.

What Diwali Means To Me...

Growing up in Canada or abroad, each of us has a different experience and set of memories of this revered festival. What does the festival of Diwal mean to our beloved readers?

Does your personality work for you? Introverts Vs Extroverts

Most theories identify personality as a consistent set of traits unique to an individual that control and cause one's actions and reactions which are expressed through thoughts, feelings and behaviours.

The Key to a Long Lasting Relationship

Relationships, whether with a partner or a friend, may have simply run their course. Often people can grow in different ways than the person they have a relationship with and that can affect the longevity of it. In some cases it can be more loving to separate than to stay together, explains Dakin.

When a couple is having relationship problems, they sometimes feel that this is happening because they are not with the right partner.