"I want to give the world a hug after Covid ends.”

There is no one way to define Shweta Tripathi - thanks to the kind of roles she picked in the past. From the award-winnning Masaan, Mehandi Circus, Raat Akeli Hai, Haraamkhor, Cargo, and her latest, Mirzapur, she has been seen in some very diverse projects. Shweta is currently shooting for Escaype Live in which she runs a parlour. She is also basking on the success of Mirzapur Season 2. The firecracker of an actress talks to DARPAN Magazine in an exclusive interview.

Tell us a little about your character transformation in Mirzapur.

Golu is a head strong girl who is challenging her own believes. You are sometimes put in situations when your knowledge and understanding, everything else you believed in fails you. That's what happened to her by the end of season 1. She is at a stage where she doesn't know what is right anymore. Two people who she loved the most and admired the most were snatched away from her. So her goals and priorities has changed so has her journey. As an actor, my journey was super satisfying to play Golu. But it was not easy getting a hold on Golu especially because she is so complicated. For me, it was a whole new experience playing the same character in a different tone - everything about her has changed in this season- her haircut, scar on the forehead, clothes have changed, style, etc. I guess only the watch on her hand is the same! The way she looks at everything around her in the world has changed.

We are sure; you miss the old characters that are not to be seen in this season.

I miss Vikrant and Shreya but mostly I miss Bablu and Golu. Well, the old characters had to go for the season to continue. I watched the last episode of season 1 so many times because it is what makes the crux for the next season. That's why season 2 is all about revenge and the fury. What I would urge the public to do is not just look at the guns and violence but analyze why a certain character is behaving the way they are. We need to find out why Munna did what he did and how did he get there. I want people to understand the characters and how they could impact the society.

Was holding a gun fun?

It was different but I honestly don't want my life to be like Golu. It is better to stay away from guns and violence because nothing good comes out of it. I didn’t have a lot of fun shooting or it is in no way soothing to ears. In fact you are always worried that it shouldn't hurt anyone. But it had to be done. More importantly, I want to learn different things as an actor and that's the best part about being one. You get to experience things and emotions which we would never otherwise in life.

That was the most boring scene - it was as simple as having coffee. There was a lot more to the scene - the music, camera setup, VO, etc. But I think every character I do is different and there is so much to learn and know. My upcoming show sees me running a parlour and now I am learning how to thread eyebrows and upper lip. There are small things that you need to learn which make the character what they are and I love that about the process.

What goes on in that head when you select movies?

We think, we choose the roles but I think a lot has to do with one’s upbringing. I had a very cultural brought up - my dad is an IAS officer, mom a teacher, both retired now, but I grew up in a supportive environment where caste, height, one’s appearance were never given importance. My parents gave a lot of importance to books. Whenever I speak to my father, he asks me two things- what did you read and are you working out? We have been watching art movies, watching plays at Prithvi Theatre, so all that I have seen in my childhood keeps accumulating in the subconscious mind and has a slight influence while selecting roles. I also go by instinct - the something about the role has to excite me. 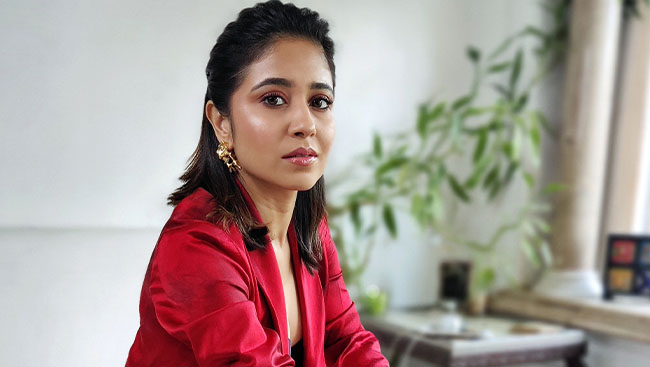 Is Slow Cheeta aka your husband Chaitanya Sharma part of this process?

Yes, he does get involved in the process. I go to him for everything- whether I am sad, happy, hungry, or just have anything to share. He is my most favourite person in the world. He keeps me grounded, and we are each other's critiques and support all the time.

What do you have to say about the advanced OTT platform these days?

OTT has made everything accessible; the content is coming from all over the world. Which means your competition is the world now what with Korean dramas and Spanish shows. Even my parents have started watching Korean series. So the content has to be so much between now and we need to deliver otherwise the viewer switches immediately. From Boston to Bihar, they can watch content on any screen and unlike movies the characters are all very real. People are pushing the boundaries to deliver relatable content. Having said that, I would love to see myself on the 70mm. That’s what we watched while growing up, we dreamt of that all the time and the experience of community watching is unmatched. But I will love to do both. Tell us your favourite director and genre.

I have had the privilege to work with so many great actors – Nawaz bhai, Vicky Kaushal, Vikrant, Jeethu, and we all learn so much from our co-actors. I would love to work with David Fincher or Martin Scorsese. I watched Jojo Rabbit and felt like someone punched me in my stomach. Everything about the movie was on point. I would love to act with Ranbir Kapoor at some point. I enjoy drama a lot, but I want to try different things. So I believe when I do that, I will become better at drama

How has Covid been for you?

It was personally not bad; a lot of the news coming out was disheartening. It's so important to hold on to the silver lining whether thick or thin. I think it is so important to celebrate the smaller things in life. I live with my in-laws and his entire family- so we will play games, and the biggest question everyday would be what are we cooking today? I did not binge watch a lot. I came under social media pressure with everyone making pasta and ice cream but then I realised do what you want to do- whether you want to do something or do nothing at all. Professionally, I had Raat Akeli Hai, Cargo, Mirzapur, and The Gone Game come out during the pandemic, so I cannot complain. What is the first thing you will do after Covid ends? I want to hug everyone. The world needs a hug. We need to do this for ourselves and every person in the world. If something needs to be spread, it’s not the virus, but it should be love, hope, and happiness.