The 11th Anniversary celebration of DARPAN’s Extraordinary Achievement Awards was an unforgettable night. With the entire South Asian community in attendance, DARPAN Magazine put together a great event that honoured the last 10 glorious years of the Awards and the growth of the community.

DARPAN’s Extraordinary Achievement Awards 2021 was a successful night. Held on October 15 at Aria Banquet & Convention Centre in Surrey, this year’s celebration, presented by RBC Royal Bank, was as exciting as it was different.

DARPAN Magazine, hosted its 11th Annual Awards in the company of esteemed social, business and political elites. Ten amazing individuals from the South Asian community were recognized for their extraordinary achievements and for reflecting their heritage in a remarkable way. These 10 South Asians, identified as leaders, who embody the spirit of community and give back to greater Canadian society, were honoured with the prestigious Darpan Extraordinary Achievement Award.

Keeping everyone’s safety in mind, as well as following the health regulations, vaccination proof and temperatures were checked at the entry. After a successful check-in, guests were ushered in to the Preston Cadillac-sponsored Red Carpet reception, where they were welcomed with champagne, gorgeous ice sculptures depicting DARPAN’s journey of 17 years in publishing excellence, the latest luxury Cadillac Preston model on display, and live performances. 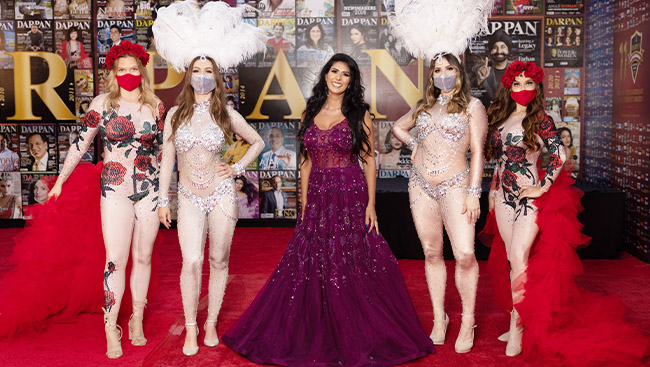 The red carpet was buzzing with prominent members of the South Asian community, political dignitaries and socialites. The media centre was busy – our Red Carpet hosts Ish Sharma and Nisha Khare interviewed our esteemed guests asking them their expectations for the evening; photographers were busy capturing beautiful moments; and a special history wall showcased DARPAN Magazine’s journey though magazine covers of the last 17 years. The beautiful cocktail lounge sponsored by WBI Home Warranty had guests mingling and enjoying the hospitality. It was a magical night, and guests were excited for the evening to unfold.

Canadian actor and television personality Huse Madhavji, who flew in from Toronto, was the Master of Ceremonies for the event. Stage and screen actor Huse Madhavji is best known for his role on Saving Hope where he played a socially awkward neurosurgeon Dr. Shahir Hamza for five seasons. He was also in the Emmy award winning season of Schitt’s Creek and is seen on the Hulu’s teen sci-fi drama Utopia Falls and as the voice of Ram Sing Ji on Disney Junior’s Mira, Royal Detective. Prior to his acting career, Madhavji was a TV presenter where he hosted a daily entertainment show, interviewing some of the most famous and celebrated faces in the world. 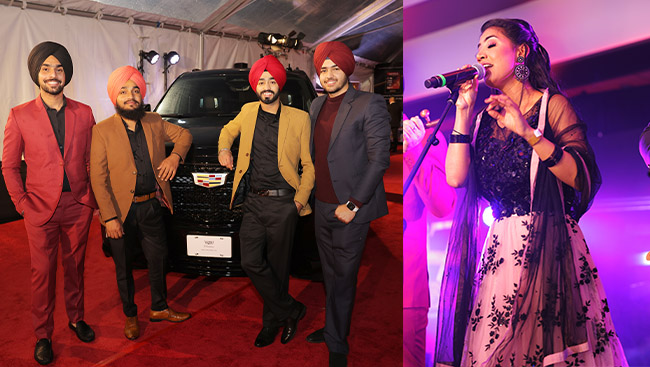 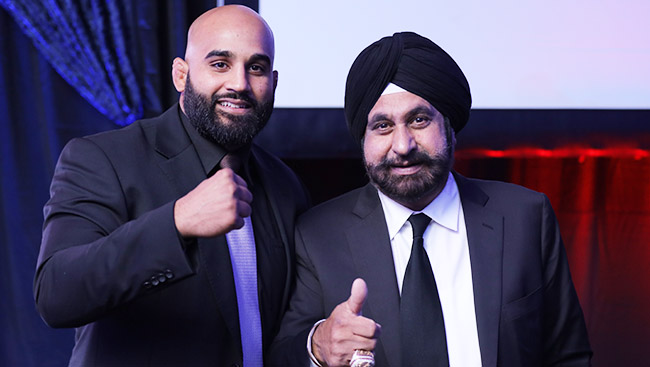 Celebrating 17 years of publishing excellence and 11 years of Awards, guests were shown a glimpse of the extraordinary achievers that have graced the event over the years, along with a special mention to the late Dr. Narinder Singh Kapany. After acknowledging the main sponsors, our honoured guest, Surrey Mayor, Doug McCallum, took the stage to share a few words with the audience, followed by Martin Thibodeau, the Regional President of RBC Royal Bank in BC; and Serge Corbeil, Director Government Relations - Local & Provincial, Air Canada.

The highlight of the evening was our Guest of Honour and Keynote Speaker, Nav Bhatia – known worldwide as the Raptors Superfan. Bhatia’s journey began with his work as a car salesman, during which he proceeded to quickly break many records. Two years later, the salesman turned businessman and bought out the entire car dealership. Undoubtedly, climbing to the top was no small feat, but Bhatia has made the community proud with all that he has accomplished. Hardworking Bhatia remembers having no hobbies as he tirelessly worked morning to night. When he got home from work, he would watch basketball.

As time went on, Bhatia began attending basketball games in person – and just never stopped. In fact, as of the team’s inception in 1995, the Superfan has never missed a single Raptors home game. In 2019, when the Raptors defeated the Golden State Warriors to win the National Basketball Association (NBA) Championship, Bhatia made history by becoming the first-ever fan to receive an official NBA championship ring, adorned with 640 diamonds. 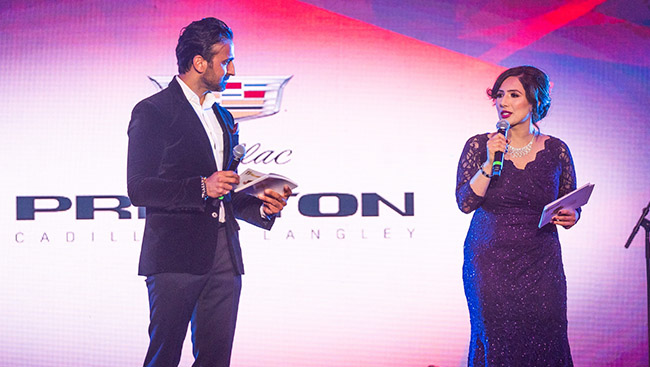 Bhatia has also founded the Nav Bhatia Superfan Foundation, which brings together diverse groups of people together, in Canada and around the world, through sport. The Foundation also works towards building washrooms for girls in Northern India’s schools. Aside from his community work in India, Bhatia is the face of the NBA in India as well. For Bhatia’s promotion of game and global philanthropic efforts, he was forever memorialized through his induction into the Naismith Memorial Basketball Hall of Fame. The Raptors Superfan is the first fan and turban-wearer to ever be given the honor, and his turban, displayed in his gallery, is the first turban in the Hall of Fame.

On stage, Bhatia shared with the audience his journey from being a struggling immigrant to now being called the Raptors Superfan and his how love and dedication towards basketball. Attendees gave him a standing ovation as his inspiring words touched the hearts of everyone present. Bhatia was a true celebrity at the event as there were guests lining up to meet him and take photos with him. 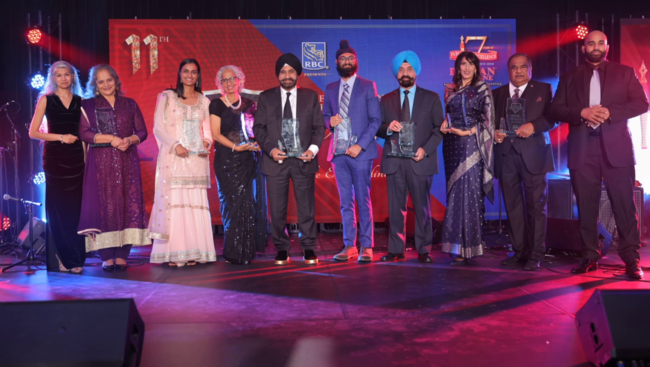 MC Madhavji's energy and witty sense of humour kept the guests engaged and entertained. Many known figures and celebrities from within the community and British Columbia graced the occasion with their presence. Guests from within and outside the community added glamour and style to the night with their attendance.

The awards session – the main element of the event – was all about achievements, excellence and community spirit. Ten amazing individuals from the South Asian community were recognized for their extraordinary achievements and for reflecting their heritage in a remarkable way. Among the list of the 2021 award winners was the BC Lions’ owner; President of Angus Reid Institute; a Schulich Scholar; the first Sikh and South Asian MMA World Champion; Whitecaps FC Coach; and an award-winning actress and filmmaker. The never-ending applause by the guests, along with the inspiring thank you speeches by the winners generated a feeling of pride and unity at the event. 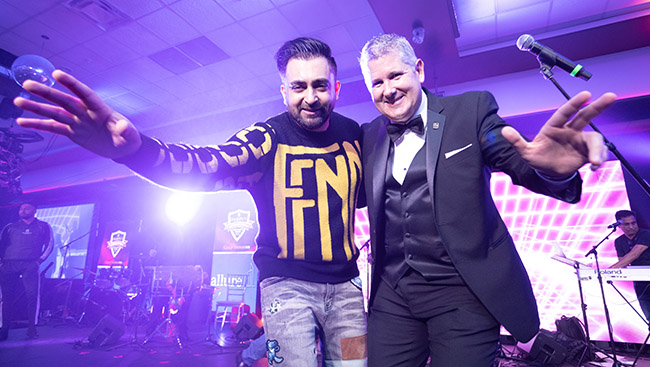 The atmosphere at the awards night was lively. There was music, food, glamour and beautiful people having a great time. The dinner was sponsored by ML Emporio Properties Ltd. and the entertainment sponsor was Thind Properties. This year at the awards, guests enjoyed a special performance by famous Punjabi singer and actor, Sharry Mann. His song ‘Yaar Anmulle’ broke all previous records for being an unsigned Punjabi singer on the Internet, swiftly becoming one of the most talked about names in the Punjabi music industry. Today, the singer is a popular name and appeals to all music-lovers worldwide. With his infectious energy and foot-tapping songs, he entertained and got guests fully immersed into enjoying the 2021 DARPAN Awards.

DARPAN thanks all attendees for making the Awards event an unforgettable evening.

Being a woman today means using your voice to empower others to create positive change.

A woman achieve her goals because she is compassionate, committed, understanding, and the most able multitasking person.

My journey is about more than one milestone or event — but I would point to my transition away from journalism and into a new career path.

It is difficult to define the world ‘woman’ besides the obvious physical characteristics. Words like compassion, strength, independence, humility, grace, individuality all come to mind, which can be applied to anyone regardless of gender.