By Petrina D’Souza, 22 Jan, 2016
Indian-American M.R. Rangaswami plays many different roles – that of a software executive, investor, entrepreneur, corporate eco-strategy expert, community builder, and philanthropist. He is the co-founder of Sand Hill Group, an investment and consulting group which made several notable investments, produced the Enterprise and Software conference series, and launched SandHill.com – an online resource for software business strategy. He is the founder of the Corporate Eco Forum, an organization dedicated to improving the effectiveness of eco-strategies at Global 500 companies; and founder of Indiaspora, an organization that transforms the success of Indian Americans into meaningful impact worldwide.
Rangaswami believes his life has gone through many phases – the first one being about exploring and discovering what he was really interested in. Recalling his first phase, he says, “My family first suggested accounting, then law, and I received degrees in both. I still wasn’t satisfied though, so I decided to get an MBA in the US and went into business management. My first job was at a company that manufactured equipment for the oil industry. I learned how manufacturing really works on the ground, and, though I didn’t know it then, it gave me excellent training for the future.”
After that, he found a job in a brand-new software industry that was in its nascent stages in northern California’s Silicon Valley. His first position was in Quality Assurance; from there he moved to customer support, consulting services, and then sales. Finally, Rangaswami went into marketing, where he found that the variety of skills and experience from previous jobs, along with his own natural talents, were the best fit. 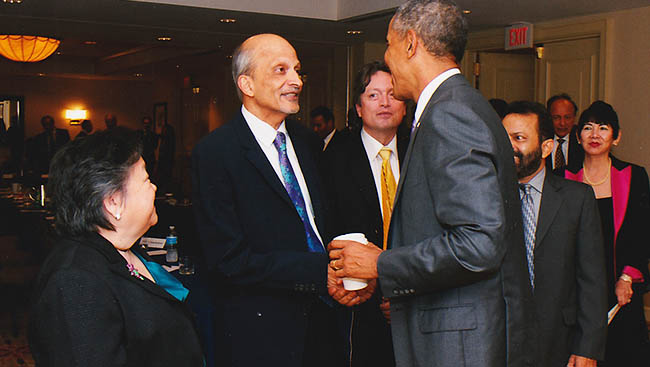 “During my years working in the software industry, I was in my accumulation phase: becoming successful and creating wealth. I was part of a team that took a company public, then I invested in several startups that did well. I built my own organizations after that – Sandhill Group, Corporate Eco Forum, and Indiaspora. Now I feel I am in the “giving back” phase,” he shares, adding that the current phase is by far the most gratifying.
Rangaswami has always been passionate about helping people and bringing them together. “If anything, I look for smart people I can work with, and find a big opportunity or challenge where we can have a major impact. I make a 10-year commitment to accomplish it.”
The successful investor/entrepreneur points out the steps towards a successful initiative: “First you need to do your homework – learn everything you can about the space. Second, you ask yourself if you have the passion to work on this opportunity and carry it through to the end. Third, you need to get a small set of advisors/well-wishers who can help you. Then you need to put in the time over the long haul to make it successful. Finally, sometimes you need to have the guts to call it quits, acknowledge failure, and move on.”
In 2012, Rangaswami became a lot more involved in Indian-American issues. “It was baffling that a community like ours, which at 3 million strong represents 1% of the US population and is the highest earning demographic (at $100,000 per year), is not more influential. After talking to various leaders, I started Indiaspora.” 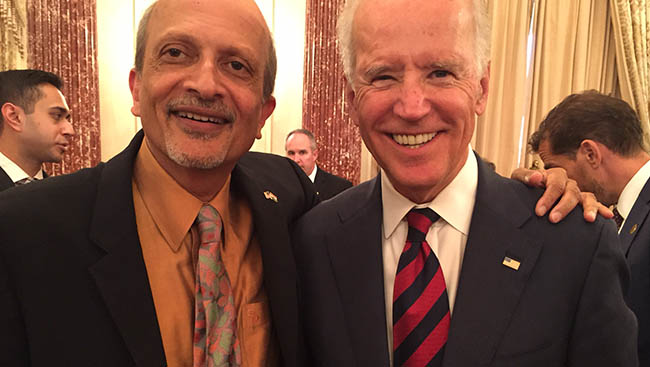 The idea was to get Indian Americans across different professions – tech, business, academia, NGO’s, policy makers, artists and so on – to be more influential and engaged. “We want to do more in the US-India space, in business, politics, and in giving back,” says Rangaswami.
Since its inception, Indiaspora has held the first Inaugural Ball for a US President and Diwali in Washington, D.C. where 50 senators and congressmen participated. It has also held two Leadership Forums. When President Barack Obama went to India, Indiaspora took a delegation and also had sideline meetings at the US India Security and Commercial Dialogues. “We are only in year three and have a lot more we want to accomplish,” adds he.
Ask him what is his biggest achievement so far, and a determined Rangaswami quickly answers, “I don’t look back. I always look forward.” Beyond work, his interest lies in travelling, sports and food. “I love to travel and have been to about 50 countries. I have another 20 on my bucket list. I am a big sports fan – love the San Francisco Giants in baseball, the Golden State Warriors in basketball, and the Hawthorn Hawks in Aussie Rules football. I also love good wine and gourmet vegetarian food,” he expresses summing up. 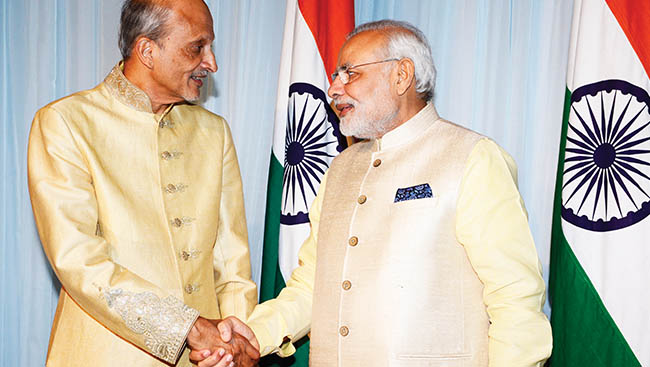 Quick Q & A with M.R. Rangaswami

Which is your most memorable moment till date?
I was invited by the Indian Ambassador to meet Prime Minister Narendra Modi when he came to New York. I decided to wear a sherwani that I had bought for the Indiaspora Ball. By coincidence he was also wearing a very similar outfit. He saw it and we both had a nice laugh!
What advice would you give those who wish to follow your path?
Follow your passion and do it when you are young and can afford to take risks. You don’t want to grow old and have regrets.
What is your advice for future immigrants?
Work hard and make your family and community proud.
Indians around the world have made significant contributions to their immigrated countries, what do you think of this accomplishment?
The Indian diaspora of 30 million people has immigrated for many different reasons. They went as labourers to some countries, like South Africa, while they went as students to others, like the US. In general, we have been known for our work ethic, family and cultural values, and especially for a focus on the next generation getting a great education. These are all very valuable as we navigate the 21st century. I am extremely proud of the accomplishments of our diaspora so far, and there is a lot more to come!
Prev Next

Bollywood actress Priyanka Chopra and actor Ranbir Kapoor share the stage as hosts for the 59th annual Filmfare awards. The duo displayed their amazing comic skills in the star studded night in Mumbai.