By Garima Goswami, 17 May, 2015
Last we saw Canada and India touch base was in April 2013, when Bollywood came flocking at Vancouver’s shores with its stupefying star power and a fan base surpassing borders. Two years later, Canada once again laid the red carpet to welcome a leader who is no less than a celebrity. Prime Minister of India, Narendra Modi yet again mesmerized even the apolitical soul with his energy, humour and more significantly his conviction of rescuing India’s plummeting economy from the dangers of corruption and red-tapism.
Modi’s ‘Single Fare Double Journey’ Mantra
Prime Minister Modi’s Canada tour was the last leg of his nine-day tri-nation international visit that included France and Germany. Commencing April 9, the tour is a reflection of the emphasis that Modi has laid on foreign relations since he was elected Prime Minister in May 2014. “If I were to pick a common theme, then it is that all three G-7 nations are industrialised democracies. We have considerable economic interests with them, and politically as democracies, we have convergence of views,” said Foreign Secretary S. Jaishankar while announcing the visit.
In Modi’s meeting with French President François Hollande – where other business leaders also accompanied him, Modi discussed defense, infrastructure and energy. A major agreement between the two nations includes the significant purchase of 36 Rafale fighter jets in fly away condition which marks the sidestepping of the log-jammed deal for the delivery of 126 aircrafts. In Germany, with his German counterpart Angela Merkel, Modi jointly inaugurated the Hannover Messe – world’s largest industrial fair where India is the partner country in its 2015 edition.

Canada being the third and last country of his three-nation tour that plays a crucial role being an important nuclear technology player, Modi made certain that his performance was influential. Upon arriving in Canada, Prime Minister Modi presented a miniature painting depicting Sikh Guru Nanak Dev with his two disciples, to Canadian Prime Minister Stephen Harper.

Taking over Canada
Modi’s impressive and extensive outreach efforts towards the Indian diaspora clearly indicate his critical regard for them in the growth of the Indian economy. This regard was particularly at display in Canada, which has presence of a strong 1.2 million Indo-Canadians.
Azad Kaushik, chair of the National Alliance of Indo-Canadians, an organization that had set-up Modi’s appearance at the Ricoh Coliseum in Toronto, spoke about the significance of his visit saying, “There is increasing trade all the time happening with Canada and India. But having said that, somehow the kind of relationship that should have gone to a very high level
could not move forward because the political system in India was a bit in turmoil. And now we have a very strong leader in India who is going to meet the inspirations of the people of India. From that perspective, I feel it is a defining moment.” 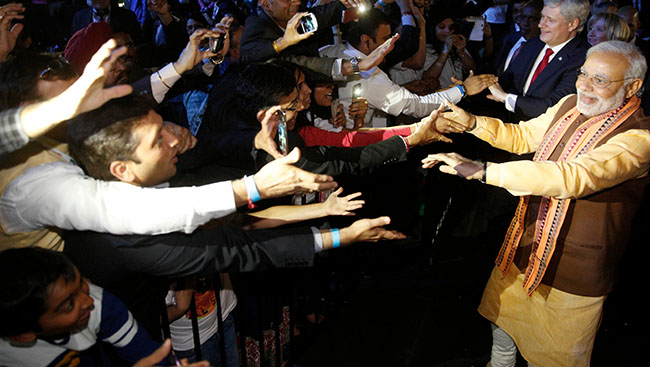 A crowd of over 8000+ individuals roared, clapped and chanted ‘Modi, Modi’ as he addressed Indo-Canadians at Toronto’s hockey arena. Like his previous addresses abroad, his speech in Toronto triggered hope while Modi excitedly outlined his government’s initiatives to swing India back on the track of development.

“India will provide the workforce to power global growth. Our mission is ‘skill India’, not ‘scam India,’” said Modi at the political conglomeration. In a gesture of greater support and engagement between India and Canada, Modi announced visa-on-arrival and ten-year visa for Canadians travelling to India, and the facility of an e-portal offering visa-related services for NRI’s.
Coinciding as the first bilateral trip by an Indian prime minister to Canada in more than 40 years, the visit was an opportunity that both PM’s were looking forward to court. On his first day, Modi signed a five-year deal with Cameco for the supplication of over seven million pounds of uranium to fuel Indian nuclear reactors through 2020.
In his contributing article to The Globe and Mail, Steward Beck, president and CEO of the Asia Pacific Foundation of Canada, analyzes these developing Indo-Canadian ties by writing, “India, a country of a billion plus people, has committed to nuclear power as a key clean energy source for the growth of its economy. At one point in our bilateral history, as India developed its civil nuclear capacity, Canada was India’s mentor and partner. Since 1974, however, we have been working on our common technology in isolation. Today we embark on a collaborative path that will lead to process and service improvements, benefiting both countries and economies. This is good for our environment and our prosperity.”
Upon arriving in Vancouver with his Canadian counterpart PM Harper, and accompanied by other ministers including Jason Kenney, Minister of National Defense and Multiculturalism, and Christy Clark, Premier of BC, Modi addressed a gathering of over 300 individuals at Khalsa Diwan Society in Vancouver.
Covering his head with a saffron cloth, Modi connected with the audience by touching upon the Panj Pyaare, Bhagat Singh and the restoration of a gurudwara in Kutch, Gujarat, that had been destroyed in the 2001 earthquake. “I have a blood relation with all of you (Sikhs present at the gurudwara) because one of Guru Gobind Singh’s Panj Pyaare came from Gujarat,” Modi mentioned in his speech. Here both prime ministers were presented with Kirpans and yellow scarves before they departed to the Komagatu Maru museum, and later to the Laxmi Narayan temple in Surrey.
Modi Means Business
As per official figures released by the Harper government, PM Modi’s visit to Canada generated business worth more than 1.6 billion CAD through commercial agreements and announcements. These announcements cover various sectors including aerospace and defense, energy, infrastructure, mining and education.

This historic bilateral visit by the Indian PM was particularly substantial for businesses mulling the pros of Modi’s Make in India campaign. His visit in Canada witnessed a roundtable with head honchos of major financial institutions where he stressed businesses not to hesitate in looking towards India for investments.

Dean Connor, chief executive of insurer Sun Life Financial Inc., that has reigned over the Indian markets for over 15 years, told media, “It’s great to see a leader who’s focused on reducing red tape, reducing roadblocks, and encouraging development.” Fairfax Financial Holdings Founder, Prem Watsa, was amongst those securing a brief meeting with Modi. “The opportunities are huge and the $1 billion, we think is just the first billion we will be investing there (India),” Watsa stated at a Fairfax’s shareholder meeting.
Modi Attracts Protestors
Modi’s three-day visit to Canada was marked by protests and support. A crowd of around 200+ placard-waving protestors greeted Modi upon his arrival at the Vancouver Sikh and Hindu temple with his Canadian counterpart – a much different welcome from an earlier meeting with business leaders in Toronto the same morning. Protestors flashed signs carrying slogans such as “Human rights before trade deals,” and “Modi, Go Back” while others raised their voices in tune with the pro-Khalistan movement. All of this was mixed and rather overpowered by chants of “We love Modi. We love Harper” as he arrived at the Hindu temple to address a crowd of hundreds that had been waiting for hours to secure Modi’s powerful presence.
Overall, Modi’s three-nation visit was a perfect display of the star power this controversial yet popular leader holds. As he wrapped up these lightning-fast trips, we saw him sign a string of significant deals, interact with the local diaspora and receive a full-fledged rockstar treatment, and lastly boost a disfiguring image of India blemished with red-tapism, corruption and unemployment, on the global stage. But will Modi mark his name as a reformer in history? Will he be able to repair the sluggish economy, high inflation and declining economy he inherited from the Indian National Congress led alliance? For India’s sake, let’s hope he does.
Prev Next