After several generations, the Kia Optima badge has officially been retired. But don’t fret, for the four-door lives on in our market, but is now called the K5 after its South Korean counterpart. And the styling both inside and out has changed nearly as drastically as the name, as Darpan examines below.

“K5 is the breath of fresh air that the mid-size sedan segment never knew it needed,” says Kia Canada COO Elias El-Achhab in a news release. “We’re anxious to share this innovation with Canadians — K5 delivers the top of-the-line design finishes drivers love, with the added bonus of turbo performance, a roomy interior and the latest in safety technologies.” 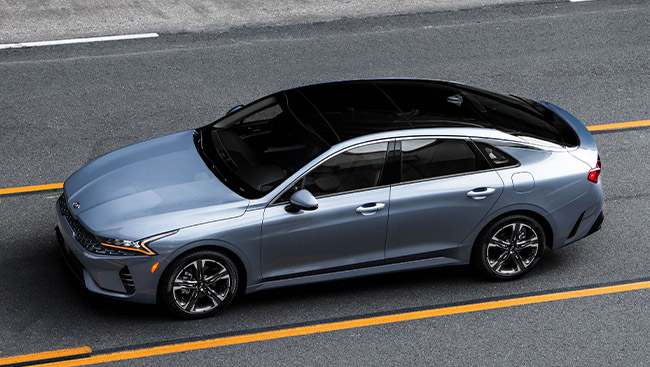 Gone is the signature tiger nose grille, replaced by what the manufacturer calls the tiger face, which, somewhat confusingly, is a sharkskin-inspired mesh grill extending well beyond the anterior edge of the headlamp housings. The aggressive update complements the GT car’s long and lean fastback profile — the 4,905 millimetres overall length is in excess of 50 millimetres more than the outgoing Optima.

The interior has no shortage of interesting design choices as well. It’s been awhile since I’ve seen a T-handle shift knob, especially in this segment. Kia’s positioning as a value brand is made evident via the analogue vs. digital gauges, simulated wood dash trim and absence of steering wheel paddle shifters. Not so much a complaint but rather an observation, as the instrument panel and cabin in general look great. There’s nothing budget about the tech, however. The available 10.25-inch infotainment monitor has a split-screen function to display two apps side-by-side, and Apple CarPlay and Android Auto now allow cordless operation. Feeling stressed out from sitting in traffic? Users can turn on “Sounds of Nature,” providing soothing background noise like waves crashing on a beach or gentle rain falling. 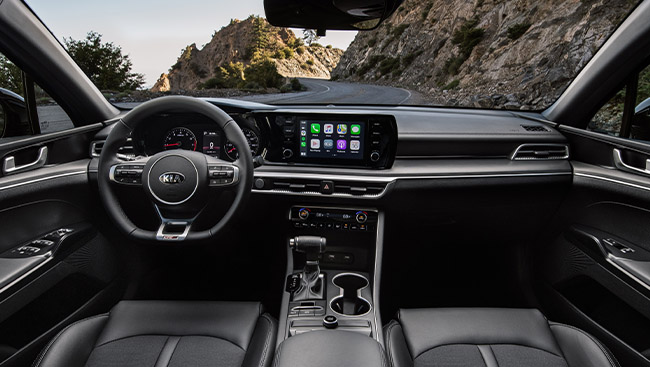 A benefit of having such a lengthy body is increased cargo capacity. After folding down the 60/40 rear seats, I was able to slide an entire crib inside. Were it not for the frame of the trunk intruding into the space, even larger items would no doubt fit.

The K5 offers the choice between two turbocharged four-cylinder powertrains: a 2.5-litre (exclusive to the GT) or the 1.6-litre we tested sending 180 horsepower and 195 lb-ft torque to all four wheels, and mated to an eight-speed automatic transmission.

I was actually a little surprised that I’d be able to hear any sort of feedback from the small displacement motor, but engineers have included an Active Sound Design feature —love it or hate it — producing artificially enhanced noise through the Bose stereo speakers. The output is smooth and linear and the vehicle is just really pleasant to drive. The 2021 Kia K5 is built in West Point, Georgia and starts at $29.595. 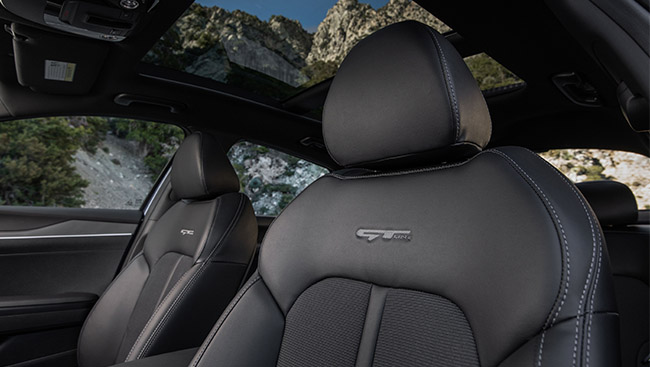