Las Vegas: On & Off The Strip

Benjamin Yong, Darpan, 15 Mar, 2014
There is a lot more to Sin City besides gambling and shows, the possibilities are endless from unique attractions and quirky museums to international cuisine and the best nightlife in the world.
Mention taking a trip to Las Vegas, and people often assume you are either going gambling or catching a Cirque du Soleil performance. While both are sound choices, the fact is that in 2014 there are a dizzying array of unique attractions in the famed destination both on and off the Strip, from quirky museums to international cuisine to some of the best nightlife in the world.
Sin City isn’t normally synonymous with intellectual pursuits, but there are actual several  museums and galleries open to the public every day of the week, all year round. For example, the National Atomic Testing Museum is located just a short walk from the Strip at 755 East Flamingo Rd. Tipping a hat to Nevada’s history of experimenting with nuclear weapons, visitors can see rare artifacts like a B-53 bomb, learn about actual testing equipment used in the field and even experience a simulation of a nuclear blast.
For those in the mood for art, there is the Gallery of Fine Art located right inside the Bellagio. Partnering with institutions around the world, the gallery showcases specially-selected pieces from renowned collections like the recent “Warhol Out West” exhibit, displaying 56 of the iconic artist’s pieces including paintings, sculptures, photographs, screen prints and wallpaper. Docent tours are included and offered once a day at 2 pm.
When it was built at the beginning of the 20th century, the Titanic was considered a work of art — at 882 feet long, it was the largest object made by man at the time. People dropping by the permanent Titanic Artifact Exhibition inside the Luxor can actually see a piece of the hull of the actual ship that sank north-east of New York during her maiden voyage. There is also a recreation of the spectacular wooden Grand Staircase that was shown in the popular 1998 film by James Cameron.
Aptly located in downtown Las Vegas where it all began, the Mob Museum opened in 2012 in the former federal courthouse and US post office, where organized crime hearings actually took place in the 1950s. The massive 41,000-square-foot complex spans three floors and it is wise for guests to budget at least two to three hours to see everything, and there is indeed lots to take in. Find out what makes gangsters tick, practice shooting a tommy gun and sit through a mock trial in a once-real courtroom.
After doing all that walking, you are bound to work up an appetite — fortunately Las Vegas is home to over 2,000 restaurants serving food from every corner of the globe. Some restaurants actually offer dishes from several countries under one roof, like Bellagio’s Sensi that fuses together Italian, Asian and American influences with lots of seafood options. Boasting a modern motif with an open kitchen and lots of glass, try their roasted octopus to start followed by lobster that you can get either wok fried, steamed or grilled. 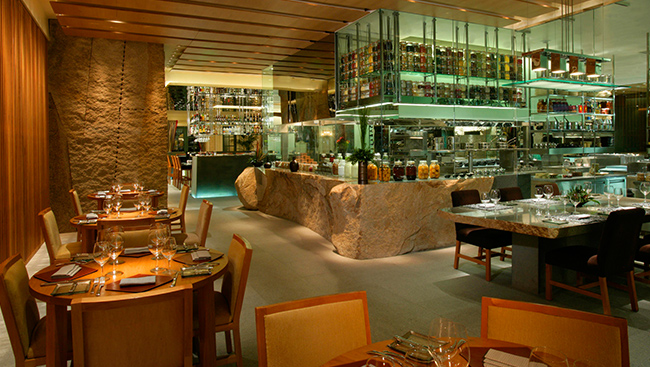 In terms of French fare, it doesn’t get much better than Andre’s Restaurant & Lounge at Monte Carlo Resort and Casino. And what’s more French than pan-seared duck foie gras on toast? Served by attentive staff in their romantic two-level dining room (read: great date spot), it makes an excellent precursor to the pan-seared duck breast or potato-crusted sea bass. Finish off the taste of Paris with a decadent warm chocolate flourless fondant or the very cute ice cream and sherbet trio sampler. Extend the evening by going to the cigar and whisky lounge upstairs and browsing one of the three largest restaurant collections in existence.
Not every meal has to be of the four star variety, and some of the best post-hangover food can be found literally right on the Strip. You’re probably familiar with Fat Burger, but how about Fat Bar located across the street from Monte Carlo? Marrying tasty burgers with a fully stocked bar, you can enjoy a 1.5-pound XXXL beef burger (there are turkey and veggie options as well), while doing some of the best people-watching anywhere. Nurse the headache from the previous night with a 100-ounce pina colada slushie in a souvenir cup. 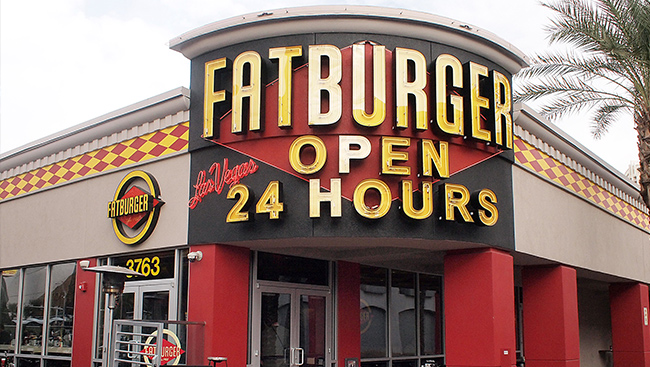 What’s an article about Las Vegas without at least some mention of a nightclub? One of the newest in town is Hakkasan, which opened in April of 2013. It is actually a multi-level venue that starts with an upscale Cantonese-style restaurant on the first two floors. Wander upstairs and you will find the Ling Ling Club on the third floor offering a more intimate space and open seating playing Hip-Hop and Top 40. Here you can order cocktails — like the delicious signature Hakka drink with Grey Goose vodka and lychee juice— from their famous mixology bar. The main fourth floor is a huge open space, where resident DJs like Calvin Harris and Steve Aoki spin from a specially-designed platform that can be seen from anywhere on the level. Finally, the mezzanine is a private VIP area at the top. 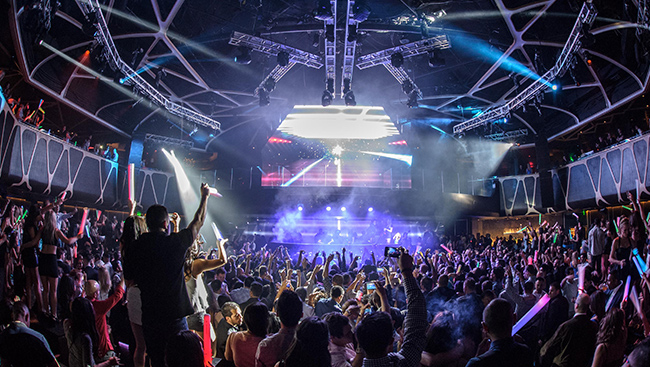 Hakkasan is housed in the MGM Grand situated on the south end of the strip and just a 10-minute taxi or shuttle ride from the airport. One of the older next-gen hotels built in 1993, it underwent a $160-million US renovation in 2012 that really shows if you take a stroll through now compared to five years ago. Reasonable prices, friendly staff, 5,000 spacious smoke-free rooms and amenities including free WiFi, a massive gaming area, top restaurants, entertainment, shopping, and even a wedding chapel make it a very attractive choice amongst the many five-star resorts. It is also the easiest place to catch the convenient Monorail that can take you to the other end of the Strip in minutes.
Certainly, if you are lucky enough to take a trip to the city that never sleeps, stop by a slot machine and take in a show or two. But if you think outside the box a little, you might just learn (and eat) something new and have a lot of fun doing it!
PHOTOS: Las Vegas News Bureau, MGM Resorts International, Mob Museum, Benjamin Yong, National Atomic Testing Museum, Vegas 360, Premier Exhibitions
Prev Next

Myanmar will be presented the award of World's Best Tourist Destination for 2014 by the European Union Council on Tourism and Trade soon, media reported Sunday.

When the cold rolls in and wooly socks come out, you know winter has arrived. It is a time of year when the world brings out its blanket of white and gets ready for a few months of hibernation awaiting the spring warmth to return once more.

This was my first time visiting New York so when people heard about the trip they were quick to give recommendations on what to see and do. I made it known, however, that I didn’t want to do the typical tourist visit.

The Spice is Nice: Trinidad & Tobago

Located seven miles off the coast of Venezuela, T&T is the most southerly isles in the Caribbean Sea, and boasts a diverse combination of wildlife and plants from the Caribbean and South America

Beat the Heat at These Local Watering Spots

Nothing quite says summer like a day at the beach and Vancouver has a lot to choose from. We all know of the popular ones like English Bay and Jericho Beach. But if you fancy a change, here are some lesser known beaches to check out:

A Weekend Away in L.A.

For those of us who aren’t celebrities but enjoy dabbling in a world of glamour and fame for just a moment, we whisk ourselves away to Los Angeles, Hollywood.