London is Calling You

This electrifying, historical city is home to some of the world’s best sights, diverse attractions, and eclectic activities. No matter what you’re interested in, there is something for you in London.

As the sun began to set, the myriad of colours spectacularly lit up the sky behind Big Ben and the Houses of Parliament, and as the clock hands turned to 7 o’clock, the signature chimes merrily rang. London is full of these once-in-a-lifetime moments that tourists of all ages will remember for years to come.

London is an iconic destination that draws tourists from around the world year round. Located on the River Thames, London is home to a rich arts culture from numerous theatres to diverse museums and galleries; historical sights like The Tower of London, Buckingham Palace and Westminster Abbey; and architectural marvels from the Shard to London Eye.

The United Kingdom is the gateway to Europe, and most travellers make sure London is their first stop – be it for the first time, or the 10th time – this electrifying, historical city is home to some of the world’s best sights, diverse attractions, and eclectic activities. No matter what you’re interested in, there is something for you in London. 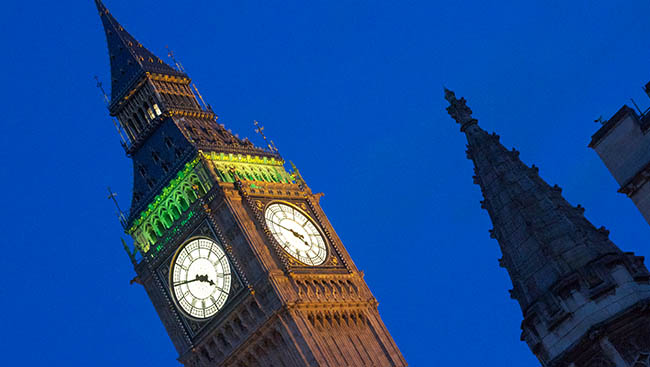 SIGHTS
This bustling, world-class city is a tourist’s dream year round, but I’ve found that travelling to London in May or early June is ideal, as the weather is pleasant and the influx of summer tourists – students and families – haven’t arrived yet in droves.
The best way to get around London is to walk, in addition to using the famed Underground rapid transit system. Once you familiarize yourself with the Underground’s various lines, it’s easy to figure out and get around the city.
Walking along brick lined sidewalks, London is a historian’s dream come true with monuments or historical plaques around every corner – it feels like every cobblestoned street has a story to tell. A visit to London wouldn’t be complete without visiting some of its iconic sights, namely:
·      Big Ben and the Houses of Parliament – a magnificent sight, perfect place to take a London selfie with the iconic clock tower and grandiose parliament buildings.
·      Westminster Abbey – this architecturally stunning Gothic church is where monarchs have been coronated, in addition to being buried, since the 10th century. England’s most significant historical figures are also buried in the Abbey including Sir Winston Churchill, Jane Austen, and Charles Darwin.
·      Trafalgar Square – home to Admiral Nelson’s column and beautiful fountains and sculptures. Surrounding the square is the National Gallery (art museum) and St Martin-in-the-Field Church (hosts live classical music events). From here, you can walk to Buckingham Palace, and on the way, you can visit 10 Downing Street, home of the Prime Minister, and see the Queen’s famed British cavalry and their horses. 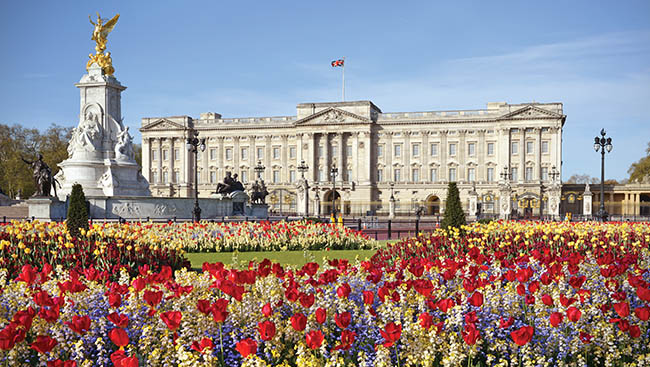 ·      Buckingham Palace – is the London residence of Queen Elizabeth II and her royal family. You can walk through idyllic St. James’s Park with its ponds and swans towards the illustrious palace, which is an excellent place to take pictures and see the ‘changing of the guard’ ceremony.
·      The Tower of London & London Bridge – plan to spend the day exploring the royal palace and fortress, which is home to the exquisite Crown Jewels collection, famed White Tower, legendary ravens and yeoman warders, better known as beefeaters. Anne Boleyn was also beheaded on the grounds, and it’s rumoured that her ghost has been seen walking around the towers, carrying her head under her arm. London Bridge is in the same vicinity, so it’s a perfect place to take pictures with the picturesque structure. 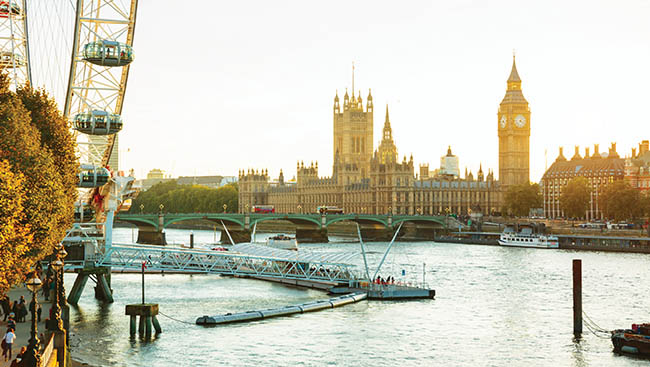 The London Eye is a giant ferris wheel located on the south bank of the Thames that offers breathtaking views of the city. In addition, the Shard is a 95-storey skyscraper that offers London’s highest viewing platform and from here, you’ll witness unparalleled 360-degree views for up to 40 miles.
Theatre lovers will want to visit Shakespeare’s Globe, a replica of an original Elizabethan theatre showcasing Shakespeare’s plays, or the West End Theatre District to catch must-see plays and musicals. London is home to numerous museums and galleries, but the Natural History Museum and Tate Modern are worth a visit and amongst my favourites. Shopping enthusiasts will want to explore the bustling Oxford Street, home to hundreds of stores boasting the latest European fashion.
EATS
London isn’t just about fish and chips anymore, and has transformed into a foodie city over the last few decades. The London of today showcases international cuisine and is home to fine dining Michelin-starred restaurants, chic gastropubs and champagne lounges, trendy hot spots serving tapas, and of course, traditional British pubs, restaurants and afternoon tea. 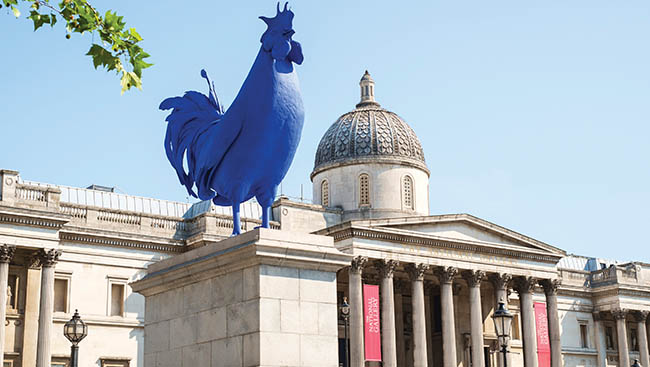 For unique and tantalizing culinary experiences, here are a few restaurants that will delight your palate:
·      Lima – renowned Peruvian chef Virgilio Martinez Veliz opened Lima in 2012, and two years later, Lima was the first Peruvian restaurant to receive a Michelin star. “Our idea of gastronomic luxury is simply having something natural, indigenous and unique,” says Veliz. Lima now has two locations in London.
·      Barrafina and Polpo – Located in the trendy Soho district, Michelen-star Barrafina offers authentic Spanish tapas, while Polpo offers delightful Italian tapas – the sharing-style plates are not only delicious, but perfect with a group of friends and a bottle of wine.
·      Gymkhana – Celebrity chefs and food critics voted Chef Karam Sethi’s Gymkhana as Britain’s #1 restaurant in 2014 (National Restaurant Awards). This Michelin-star Indian restaurant serves Indian food with a twist and its style is “inspired by colonial India’s gymkhana clubs.”
New York is often described as the “city that never sleeps,” but I find that London is “truly the city that never sleeps.” Whether you’re checking out a nightclub or pub in Leicester Square or chilling at a rooftop bar or chic lounge in Soho, Londoners and tourists alike revel in the city’s eclectic nightlife. A few places to visit are Sky Garden and Shard’s Oblix, both offer amazing late night views; 19th century style Gordon’s Wine Bar with an extensive wine list; and the glamourous Bob Bob Ricard, where each table is equipped with a “press for champagne” button. 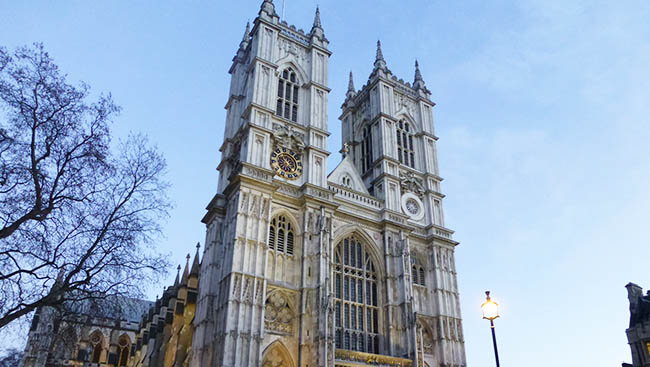 STAY
For accommodation, there are a number of options in London:
·      Hotels – from budget to luxurious, you will find all types of hotels in London, including worldwide chains from Sheraton and Hyatt to Fairmont and Four Seasons.
·      Hostels – are cost-effective, located throughout the city, and a great way to meet new people if you’re travelling alone or with a friend.
·      Airbnb – offers vacation rentals for short or long term stay, and is a cost effective option as you can rent a flat (apartment) with a full kitchen.

A Sip-and-Step Guide To Hiking The Napa Valley

Along with the Napa Valley's famous wine-tasting trails, there are miles of scenic trails of the hiking variety, beckoning visitors who want to exercise more than their palates.

Gateway to the South: Kentucky

Bourbon is just the beginning of things to discover in this historic town.

Genoa is not on the top of most people’s list when they visit Italy, but it should be. This Italian seaport is a great way to experience la dolce vita off the beaten track.

In the heart of Dominican Republic, PuntaCana is the perfect location to get away from the humdru...

Nagoya, Japan: A mix of old and new

Nagoya embodies a dual identity of rich tradition as well as cutting-edge modernity. Tokyo an...