With a resume boasting qualities such as picturesque coastal views, an eclectic urban landscape, and of course, a certain iconic red bridge, it’s no wonder San Francisco drew nearly 25 million tourists in 2015 alone, according to the San Francisco Travel Association. In fact, the independent non-profit marketing organization indicated atmosphere and ambiance, scenic beauty, and restaurants as three of the top four reasons people visit the City by the Bay.
It’s impossible to list out all the worthwhile stops to see here, as there simply isn’t enough room. But here are a few of the best places to experience the culture and cuisine that puts San Francisco on the map. 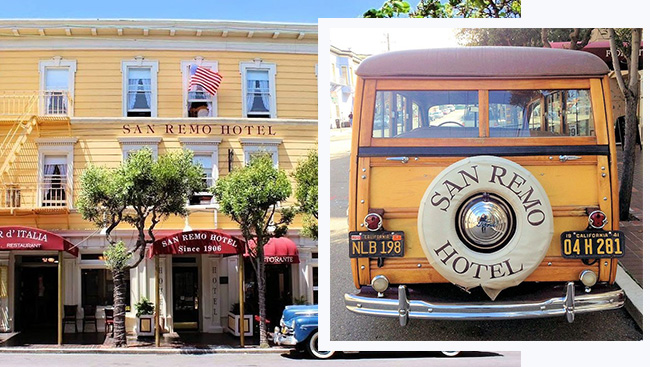 Being a former gold rush town, San Fran has roots stretching back past a century ago. The San Remo Hotel is part of that history, originally built in 1906 after a record-breaking earthquake and ensuing fires consumed most of the area. Modelled after the Italiante Victorian style, the rooms are cozy and traditionally furnished for an authentic stay. Restrooms and showers can be found down the hall, with the exception of the penthouse suite containing a private bath.
Nearly a third of the city is made up of an Asian population, many of whom have been residents for several generations. The Asian Art Museum, located in the Civic Center district, serves as a “bridge of understanding” between the United States and Asia, showcasing distinctive materials, aesthetics and intellectual achievements of the eastern region throughout three floors. Standout sections include the Chinese Jade Treasury, Korea through 1392, and Japanese Tea-Related Arts.

San Francisco’s Japantown was the first Japanese-American community to get settled and established in the United States in the early 1900s. Today, The Japan Center Mall sits right in the middle of the storied neighbourhood, broken up into East and West sections. Visitors can shop in unique boutiques like Moritaya that carry genuine Japanese goods, and choose from several establishments specializing in a variety of beverages, snacks and other treats.

Looking to get your feast on and not sure where to start? Joining a Local Taste of the City San Francisco Food Tour is a great way to not only sample some of the tastiest restaurants around, but also get in a little sightseeing at the same time. A knowledgeable guide leads a small group of people to both eateries as well as neat landmarks. For example, guests of the North Beach/Little Italy tour get to drink freshly brewed espresso from Café Roma, grab a delicious sandwich from Molinari Delicatessen, and even see one of the houses where the classic movie Mrs. Doubtfire was filmed. Protip: show up hungry.
Just a hop, skip and jump away from Japantown is Ramen Yamadaya. Specializing in Tonkotsu (pork) ramen (Japanese soup noodles), the signature broth is cooked for 20 hours to give it a deep, rich flavour. Add a side of gyoza (dumplings) and takoyaki (battered octopus balls) to complete the meal.

What travel article would this be without a mention of one of the Seven Wonders of the Modern World? The Golden Gate Bridge needs little introduction, and tops nearly all San Francisco “must-see” lists.  Here are some interesting facts about the architectural marvel: construction began in 1933 and the bridge opened in 1937; completed cost was $35 million in principal, $39 million in interest and 11 workers’ lives; the two towers are over 225 metres in height; the structure utilizes nearly 130,000 kilometres of wire; and the official name of the colour is “International Orange.”

It can be challenging to fit in everything you want to see within San Francisco’s boundaries, encompassing 49 square miles. That’s where Big Bus Tours comes in. A $50 USD one-day ticket gives riders hop-on, hop-off access to Fisherman’s Wharf, Union Square, Haight Ashbury, Palace of Fine Arts, Chinatown and much more. Admission comes with three walking tours, and there are additional options available for those wanting to add on an extra day or two, take a ferry to Alcatraz and/or borrow a bicycle for an hour.
Photos: San Remo Hotel, Flickr, Wikipedia, iStock
Prev Next

Empires may have risen and fallen, but this ancient city has stood the test of time. One of the w...

If you only have 24 hours, make sure you research what a city has to offer prior to landing. Ask friends who are locals, search online and make a list of the top spots you’d like to see.

Bali: The Island That Has It All

Tropical paradise. Spa Capital of Asia. Island of the Gods – Bali’s numerous names are a testament to its exceptionally rich and diverse culture.

A skyscraper-studded skyline and Disneyland are the two things that people most often associate with Hong Kong. Termed the Pearl of the Orient, Hong Kong turned out to be the place where some of my dreams were realised.

This summer, take time to revitalize your senses and get back to nature by hiking ...