A descendent of the first car to don the “V” badge back in 2004, a fire-breathing CTS with a V8, the V-Series is the brand’s own in-house performance tuner.

A descendent of the first car to don the “V” badge back in 2004, a fire-breathing CTS with a V8, the V-Series is the brand’s own in-house performance tuner akin to the Jaguar Land Rover Special Vehicle Operations (SVO) division or Lexus F. And its latest product might just be the prettiest one yet. 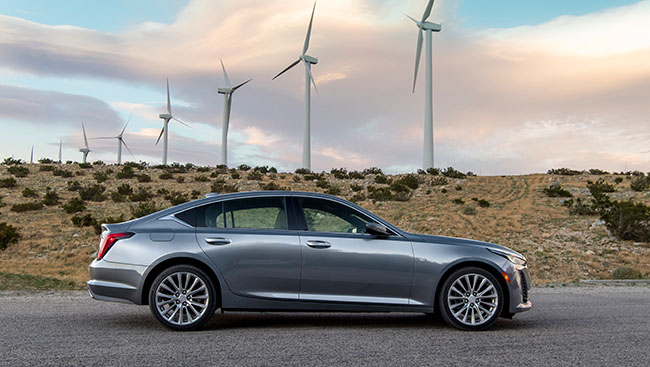 “I just love the design,” says Phillipe-André Bisson, product communications manager at General Motors during a virtual media tour of the vehicle in October.
“It’s unique: there are so many Bimmers, Audis and Mercedes [on the road], but you’re only going to see a handful of Cadillacs, especially one like the CT5-V. And why should you pay extra for something that offers you the same performance and less comfort?” he says, referring to the often harsh ride of competing models.
At first glance, immediately noticeable is the fastback-style sloping rear roofline to the Escala flagship concept debuted at the 2016 Pebble Beach Concours d'Elegance show. The sporty profile is accentuated by a long stretched out wheelbase and oversized 19-inch wheels.

Walk around to the front and the car appears to be permanently scowling at onlookers, wearing slim, slanted full LED headlamps. Below, the LED daytime running lights are vertically oriented as a design signature and matched at the rear with vertical LED taillights.

Additional exterior hints indicate this is not another run-of-the-mill sedan. Unlike the regular CT5 variant, the V has blacked-out accents, mesh grill and air intakes, quad exhaust tips, and subtle yet functional trunk spoiler helping the rear tires stay glued to the pavement whether bombing down the Sea-To-Sky highway or lapping around the local racetrack.

Cadillacs have long been lauded for its plush interiors and the trend continues here, the vehicle possessing, “elegant, wide surface lines and simple interfaces, focusing on quality, attention to detail, authenticity of materials and impeccable craftsmanship,” according to an official product description. 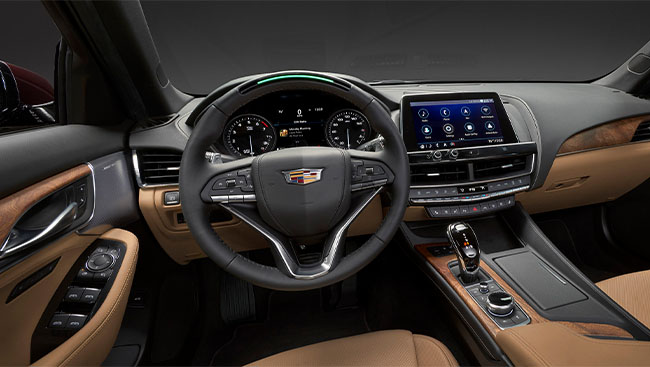 Upscale and soft touch materials abound, such as 18-way power adjustable heated and ventilated front seating upholstered in available perforated leather, genuine carbon fibre trim and thick leather-covered sport steering wheel. Occupants might also be surprised at the amount of technology now offered, from a 10-inch touchscreen infotainment system with built-in Wi-Fi hotspot to “Magnetic Ride Control 4.0.” The latter is a special type of suspension setup utilizing variable magnetic fields to adapt to changes in the road surface on the fly, providing an unmatched level of handling precision and comfort.

Next year, buyers will have the option of adding Super Cruise autonomous driving functionality. A combination of maps and sensors afford a truly hands-free experience, complete with automatic lane changes, on 300,000-plus kilometres of compatible freeways in Canada and the United States.

While going toe-to-toe against rivals like the BMW M340i and Audi S4 is no problem courtesy of a 360-horse twin-turbo V6 engine, the real beauty of the CT5-V is how customizable it is for whomever is behind the wheel. Accessible via the central display, V-Mode personalization allows users to independently change steering sensitivity, suspension stiffness and even the loudness of the exhaust — something the neighbours should appreciate.

Rear-wheel drive is standard, although the all-wheel drive model (+$2,200) is better suited to Vancouver’s wet climate thanks to the ability to send torque to any slipping wheel instantly increasing traction. Starting at a manufacturer’s suggested retail price of $49,798 the 2020 Cadillac CT5-V is sold in a wide assortment of metallic colours ($900) including Satin Steel, Evergreen, Shadow, Wave, Royal Spice as well as a non-metallic Velocity Red and Red Obsession Tintcoat ($1,395). 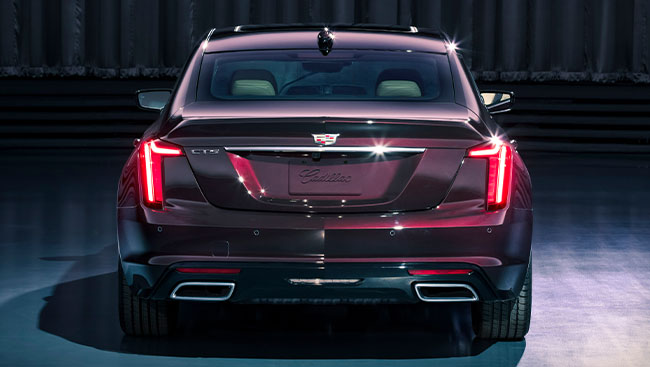