By Shweta kulkarni, 21 Jul, 2015
It is often assumed that star kids have an easy ride to stardom. However, looking at Shruti Haasan’s career graph one can definitely defy that conviction. With illustrious parents like Kamal Haasan and Sarika, one expected Shruti to pass the Friday test with flying colours. However, much to everyone’s disbelief, her Bollywood debut – Luck proved to be a box-office dud. Even down south, she failed to leave an impression in the initial days.
Shruti continued to receive flak until she silenced her naysayers with her performances in films like Anaganaga O Dheerudu, 7th Sense, 3, and D-Day. Now with her recently-released Bollywood film, Gabbar Is Back, striking gold at the box-office and reaching the coveted 100 crore mark, the effervescent actor can easily claim that she has finally arrived, but instead she says, “There is still a long way to go, and a lot to learn.”
Excerpts from our tête-à-tête with the actor, singer, musician and songwriter rolled into one – Shruti Haasan.
Success took its own sweet time; however, weren’t you disheartened by so many negative reviews and failures in the beginning of your career? Did you ever feel it was the end of the road for you?
To be honest, yes I was depressed. But I also knew that I had it in me, and all I needed to do was work harder.  I also believe everything happens for a reason. If I had experienced success at that point, perhaps I would not have been able to handle it. Now that I have struggled for it, it matters and it just makes you humble. These failures taught me to rejoice the success of films more. I was not a great actor when I entered the industry, but I am a good actor now. I was not deterred because I am someone who believes in getting better.
One thing that is commendable about you is that you never asked for any help from your father – the legendary Kamal Haasan, who could have easily produced a film for you or pulled some strings to have several producers queuing outside your door…
I did not want my dad to help me because then it would have been too easy. I mean, my parents are there to support me and advice me whenever I need it, but any achievements I have had in my life so far, have been my own. And they are very happy about it. People would come and easily sign you up because you are Kamal Haasan’s daughter, but if you, as an actor fail to leave an impact and impress the audience then what is the point. I am proud of my lineage, but I never really depended on it.  I do believe that even as parents, separate of being Kamal and Sarika, they are proud that I have done it on my own. And that’s something I am happy about. I might have taken a long time to achieve what I have, but I am okay with that because it is my journey and that is important. 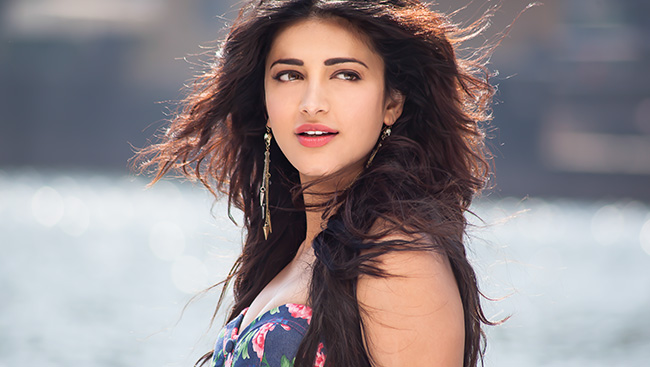 In Gabbar Is Back you share screen space with none other than the Khiladi of Bollywood – Akshay Kumar. Did you ever fear being overshadowed by him, especially given that he has a very strong screen presence and the film is centered on him?
My prominence in a film has never mattered to me much, what matters to me is that whatever little I have in the film, I make an impact with that too. In D-Day, I was there for just 12 minutes, but in those 12 minutes, I ensured that I am putting my best foot forward, and people did notice that. The length of your character or who you are with doesn’t matter as long as you leave an impact in those five minutes or even 10 seconds that you are there.

The movie has a very strong message and takes drastic measures towards corruption in our society, what is your take on it?
As actors our job is to entertain the audience and through that process if we can send across a message then why not? Having said that, I would also say that what Gabbar does in the film is very drastic, very great and at the same time very sinister, and the film is definitely not preaching to take the law in your hands. What we should take back from this film is that we should identify the corruption and refuse to be a part of it.
Talking about singing, you have a strong inclination towards music. You’re a musician, you write songs and you have been singing since you were a kid…
Music is an intrinsic part of me. I have even studied music and have been singing since I was a child. It gives me a different high, which is inexplicable. I have known music longer than acting, and it’s my passion. However, that does not mean I love acting any less. I love acting too. Fortunately, I never had to choose. I got the opportunity to do everything. So, whether I am singing or acting or writing… as long as I am allowed to express my creativity through any medium, I am happy.

You are hot property down south and have found a footing in Bollywood too, how different is it working in these two industries and how do you strike a balance?
There is not much difference other than the language. I am an actor; my job is to portray my characters and I will go wherever I get good roles. South has given me a mix of critical acclaim and commercial success, which has been nice.

For me, as an actor, I don’t care what language film I am doing as long as it is a good role. I won’t give up on good opportunities anywhere. Tomorrow, if I get a Bengali film or a Chinese or Japanese film, I will do it because it is a good opportunity for me. And really, India is very small on the world map, so I don’t see the point in chopping it up into independent pieces. I am happy being a part of Indian cinema. I always wanted to be pan-Indian.
Prev Next

In an exclusive interview with DARPAN, the quirky filmmaker opens up about his childhood, his films, and life in general.