“Getting a job was troublesome but when I realized that you need to start from the bottom and work your way up, there was no looking back."

Amit Garg works at RBC Royal Bank as a Commercial Account Manager
Sarika Gupta works at Boeing Canada as a Test Analyst
Arav is eight and Arjun is three years old
One of the main reasons Amit Garg came to Canada was to be close to his family in the United States of America. His whole family lives in California. During his young adult days, Amit decided not to move to the USA as he wanted to make a life in India. Eventually when he decided to make the move, he met with an unfavourable situation. “It was too late as I was over 21. Therefore I decide to come to Canada in 2003 and finally moved to BC which is closer to California,” explains Amit who visits his family in the US almost every year. “We sometimes drive to San Francisco!”
Amit describes his first impressions of Canada as being “a beautiful country with equality, honesty and low crime rate.” He came as a student and stayed with his uncle in Toronto for a few days; then moved to the basement with his friend. It did not take much time for Amit to adjust to the new surroundings as he had studied in Switzerland prior to his move to Canada. “After my studies I moved to Edmonton and worked in hotels for about 18 months. Then I decided to finally move to Vancouver, BC, in 2005,” says Amit, who now lives in Surrey with his wife and two children.

Like most immigrants, a difficult phase in his life was getting a job. “I had work experience, but I couldn’t get any job in the hotel industry. I did odd jobs like working in a restaurant, delivering courier and selling insurance. I was the only one working on a minimum wage to support the family, it was a difficult time,” recalls Amit who by then was married to Sarika and expecting their first baby. Ultimately, on Sarika’s insistence and referral from a friend, Amit got a job at the RBC Royal Bank Call Centre.
“I performed really well and got promoted fairly quickly. After working several years on the personal financing side of the bank, I moved to the commercial side of the bank which was my target,” shares Amit who is now a commercial account manager at RBC. In 2011, the Garg family bought a house in Surrey, meanwhile Sarika got a job, and in 2014 they were blessed with their second baby. “Life is good since then, no complaints,” expresses Amit.
Looking back at his journey, Amit is happy that his life shaped out well despite the challenges. “Getting a job was troublesome but when I realized that you need to start from the bottom and work your way up, there was no looking back. It was a roller coaster ride from 2003 to 2008 but after joining RBC and after Sarika’s stable job we were able to progress very fast,” he notes. 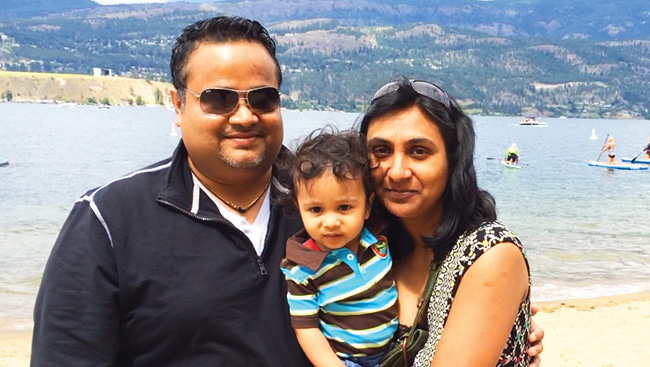 The Gargs state that they like everything about Canada. “There are opportunities if you know what are you doing, I see a safe future for my kids, and what else do you want?” says Amit in conclusion.
Resolutions made for yourself or family:
To adopt the Canadian values and pass it on to my kids.
Advice for immigrants:
My biggest advice is that we should follow and respect Canadian values and help each other and live a peaceful life.
Memories of your homeland:
Friends and time spent with them.
Prev Next