A game-changing turning point in Canada’s media world and a testament to the country’s growing multicultural fabric, say hello to Global BC’s new News Director, Bhupinder Singh Hundal. The first person of colour to take on this title, Hundal will be spearheading one of the most influential newsrooms in the province. With over 15 years of media experience, Hundal’s professional progress is a result of his passion for the news business and sheer hard work.

Having grown up in the Lower Mainland attending school at Princess Margaret Secondary, Hundal recalls, “I’ve always had an interest in news and current affairs since I was a young. I remember pivotal moments in history, watching TV, and what the news coverage looked like. I’ve always had an affinity for broadcasting.”At the time when Hundal was figuring out what to do with his career, he recognized that he would thrive only if he was passionate about it and found purpose. He went on to take the Broadcasting program at the British Columbia Institute of Technology (BCIT), which was instrumental in launching him into the broadcasting world.

“At the time, there were no dastaar-dhari (turbaned) Sikhs in media. Fast forward, 22 years later, it is still kind of the same. I wanted to pursue it anyways. I wanted to find my voice and way,”accounts Hundal. 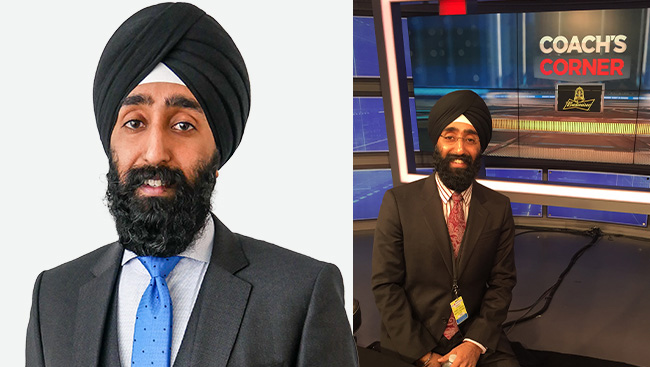 As he aspired, Hundal did more than just find his own way; he also paved the way for others. Internships at CTV, and a job at Channel M kickstarted his career, getting his foot through the door. He kept chipping away and was covering the 2010 Olympics at the onset of just 30 years of age. A pivotal point in his career, Hundal then appeared in the public eye as the commentator for the Punjabi edition of Hockey Night in Canada. He spent months preparing a team, strategizing, planning and producing the project. Hundal adds, “I knew, in my head, that once we establish something, opportunities are created for others I didn’t want to sit there and hog a seat. This is a breeding and training ground.” For him, it was not about capturing the most screen time or withholding ownership over the program, but rather pooling people together to build a team that holds a multitude of capabilities.

Undoubtedly, the program was a great success and significantly normalized on-screen diversity. When asked if his identity has ever been a challenge, Hundal responds, “To me, I always felt it was an advantage. You may not remember my name, but when I walked into the room, they would always remember me. Surely, you make an impression with all the other things – your thoughts, knowledge and thoughtfulness. That said, if you have a pool of candidates that try to look and sound exactly the same, how do you stand out? I used what I have to really propel me forward. It is an advantage for me, and I use it.”

As time went on, Hundal extended into fostering relationships and mentorship. He earned his way into managing others in his subsequent roles, while building his network to get involved with even bigger things, such as the BC Leaders’ debate. Being able to showcase his skills on the leadership side contributed to him taking charge of more projects, as he then ventured into mainstream media.

Needless to say, the media world can be a tough one. There are situations where obstacles are faced and there is bound to be a team of supporters and non-supporters, as is standard in any business or industry. Hundal comes from a very supportive family, who are filled with pride – and rightfully so – as they continue to receive messages of support and congratulations. Outside of his full-time supporters that include his mother, father, older brother, wife, and two kids, Hundal still maintains that the most important part for him is learning from every relationship he has. He emphasizes, “I am always in the mindset of studying things. Even leaders do things that are not good; that also teaches you so you can use that experience. However, I’ve had great support from my bosses and the people that I’ve worked with. It takes a village to raise a child and without that village, there is only so much you can do.”

When asked what his words of advice are to aspiring journalists or broadcasters looking to step into the field of media, Hundal boils it down to 3 points:

1. You need to have passion.

2. You must have the desire to work hard.

3. Journalism may not the most lucrative profession, especially in the beginning. You have to be passionate for a long time. Constantly improving yourself, bringing yourself and your experiences to the table, and being a critical thinker are key. There is a need to understand different perspectives and combat over generalizations to truly overcome the challenge of understanding people’s motivations. It is important to peel the layer and understand the nuances involved.

Reflecting on his current role, Hundal finds it quite humbling that he is now in charge. He takes the responsibility quite seriously, as the first person of color, filling in for a seat formerly taken by Jill Krop, who was the first woman in the role. Evidently, many in BC have a deep passion and connection with the Global BC. On the other hand, Hundal does acknowledge, “It is no secret that there is an element of disconnect with media and many different communities. My goal is to grow so that all British Columbians feel that Global BC represents them. We are one. The station has been a leader in BC. We will continue to lead in a way that continues to strengthen the faith people have felt in the past.” As he moves forward, Hundal is eager and excited to tackle, head-on, the tremendous amount of work that lies ahead and is looking forward to the challenge. On the sidelines, he has the community cheering him on!