The best buy in terms of fun to cost ratio

It’s hard to believe four years have already passed since the fourth-generation Canadian release of everyone’s favourite affordable roadster, the “ND” (chassis code) Mazda MX-5. The car remains the best buy in terms of fun to cost ratio, and is even more of a value now that the model also known as the Miata is a little Zoom Zoom-ier.

Last year, engineers massaged the SKYACTIV-G 2.0-litre engine to produce 17-per-cent extra horsepower, now rated at 181. Throw a few extra torques with a richer curve and you have one hell of a driver’s machine. All for virtually no difference in comparable cost, as the company has abolished the GX as the base trim leaving the better equipped GS in its place.
So how did Mazda perform such wizardry? Think smaller and lighter pistons, optimized valves and fuel injectors, dual-mass flywheel, fresh exhaust system and a higher transmission final drive ratio. 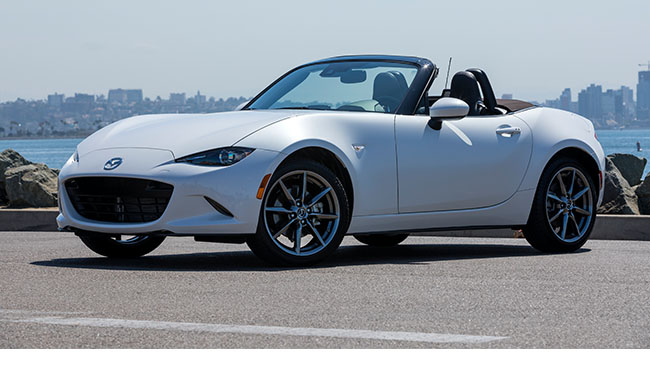 Sure, 26 additional horses may not sound like much by today’s standards, but consider that the current MX-5 is already so nimble and well balanced to begin with. Remember too, amazingly, the ND manages to be 35 millimetres shorter than the original 1989 NA offering and yet weighing only approximately 60 kilograms more.

To be fair, under normal day-to-day use — read: following the speed limit — the changes will be unnoticeable. Find a nice stretch of empty backcountry road or section of race track, and when you near redline territory, which has a new maximum of 7,500 vs. 6,800 previously, the performance bump becomes evident.

Most of the refresh occurs underneath the bodywork, however there’s a few enhancements elsewhere as well. The doors open easier, and the door stops, cup holders, seat levers and steering wheel have redesigned, including the telescoping mechanism on the steering wheel to give 42 millimetres of travel. And for a premium, customers can opt for a brown canvas top and black metallic 16 or 17 inch alloy wheels.

Otherwise, the in-car experience remains pretty much the same. Settling into the seat is still like sitting a fighter jet cockpit, the bolsters molding around you and the controls mounted at the perfect distance so that manipulating them becomes effortless. The steering wheel, manual transmission and pedals all felt like an extension of my body while I was on the road. Jinba Ittai (Japanese for horse and rider as one) indeed. 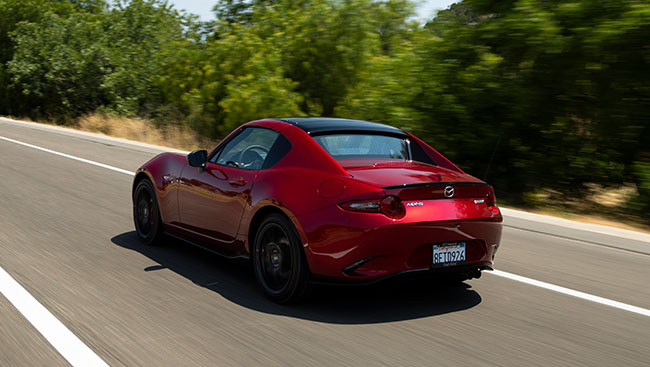 Of course, creating the ideal ergonomic passenger compartment does have caveats — for instance storage space is very limited, restricted to a couple of shallow console storage spaces. At least there are dual cup holders.

The MX-5 is quite dignified in the noise department when compared to other two seater rear-wheel drive offerings, even with the revised exhaust setup, but a nice little purr is emitted to remind you of the fun times to come when you press the engine start button. It sounds equally pleasing when you push the motor to the increased rpm range.

As good as the new Miata is, perhaps nothing is more impressive than the stellar fuel efficiency of the SKYACTIV mill, rated at 8.1 L/100 km in combined city and highway conditions.