"When I was in the fifth grade, I was introduced to the world of skiing as a hobby or an experience rather, that lasted a short while. At the age of 22, I started skiing again and there has been no looking back ever since."- Indra Hayre.

Indra Hayre: An avid skier and the founder of an Instagram-based community called Inclu-SKI-vity where she elevates the voices of the traditionally marginalized groups in the snow-sport  community by sharing their  stories.

The mountains are calling and I must go has been Indra Hayre’s lifelong motto and now she lives this every day. Indra is a Vancouver local, born and raised in the suburbs but has spent her adult life in the city and its mountains. She works for Earls and is a freelance Diversity and Inclusion Consultant and model on the side. She advocates for diversity and inclusion in all aspects of life. Indra is an avid skier, runner, hiker and mountain biker.

She is also the founder of the Instagram-based community called Inclu-SKI-vity where she elevates the voices of the traditionally marginalized groups in the snow-sport community by sharing their stories through interviews. She also creates programmes that are geared towards breaking down the multiple barriers to entry for the marginalised community focusing mainly on their psychological safety and costs subsidization.

Growing up, her sister and her played a lot of sports and spent quality time outdoors. Be it soccer, hockey or softball, they’ve played them all. In grade 5 she started skiing as a hobby or extra curricular activity which gave her a sneak peek into the world of snow sports. At the age of 22, she turned around this hobby into her passion. With a vision to carve her own path, she followed her love for the outdoors and started skiing again.

While skiing, she soon realised that it is predominantly a white sport and an expensive one tthat lacks inclusion. She started Inclu-SKI-vity to drive the conversation forward and make the world of snow sports more inclusive and accessible to everyone, especially the traditionally marginalised groups. She is striving to change the notion that if you aren’t white, you aren’t good at snow sports through this community which is highly commendable.

What motivated you to start your skiing journey?

Sports and the outdoors have always been a part of my life. When I was in the fifth grade, I was introduced to the world of skiing as a hobby or an experience rather, that lasted a short while. At the age of 22, I started skiing again and there has been no looking back ever since. 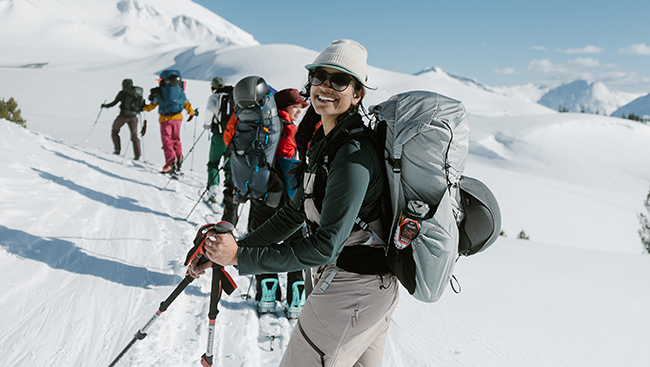 What has been the most memorable skiing experience that you’ve had so far?

To me, personally, it is when we sit down together after the course for dinner to share our experiences and stories that make it worthwhile and memorable, every single time. The feeling of creating a safe space for people like me where they feel seen, valued and heard keeps me going.

Do you have any advice for people who are looking to start their outdoor adventure journey?

While it might be scary and expensive to start skiing, don’t let that stop you. Find your community, create a safe space for yourself and keep going. Find more such communities like Inclu-SKI-vity and Colour of The Trails to start your skiing journey.

Till date, he has done almost every hike there is in British Columbia and even enjoys road trips across the country as well as the US to explore different hiking spots. He has also added Angel's Landing (Utah), which is one of the most dangerous hikes in the world to his kitty.