When Subhreet Kaur Ghumman performed in India's Got Talent 2014 (IGT), an Indian reality TV show, she stunned the entire nation with not only an electrifying performance but also with her zeal and passion. Her 2 minute performance bewildered the audience and made this 27-year-old an overnight sensation. Ghumman, an amputee, did not let anything hinder her from her path of achieving what she had to do - perform at IGT.

While growing up in a small village called Jhundhan in Punjab, Ghumman aspired to have a career in either acting or modelling, but she points out that dancing was something she was active in since childhood. However, in an endeavour to keep her academics strong, Ghumman studied nursing for three years. In order to acquire further knowledge in nursing; Ghumman enrolled herself in a BSc program in Chandigarh. "I was heading back home after my first BSc class and my friend was driving the scooter very fast. The scooter slipped on the speed breaker and I fractured my leg," says Ghumman.
She would still have survived the fracture, if it wasn't for the negligence of the hospital authorities. During the surgery, one of the doctors cut her nerve and Ghumman began to bleed uncontrollably. Her condition went from bad to worse. For almost a year, the 27-year-old along was seeking the right treatment to repair the damage done by one of the surgical doctors. "Later, I decided that I have to cut my leg." 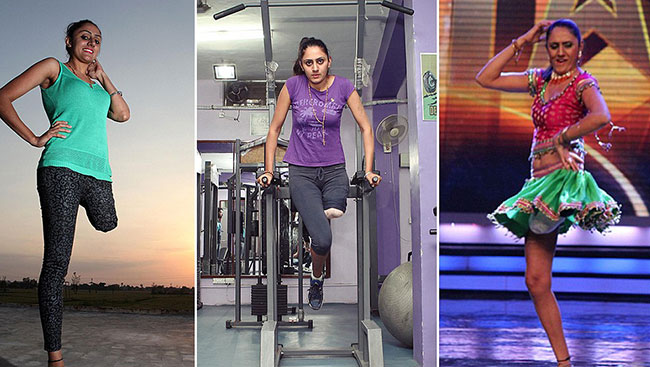 Post surgery, she spent time reading books about individuals that were differently-abled and had accomplished remarkable achievements. Their success stories infused positivity into her mind and Ghumman started viewing life differently. It was around this time when this young female was watching an episode of IGT and she saw Vinod Thakur, a double amputee, showcase an incredible dance performance. His dance moves motivated her and she decided that she would audition on the IGT stage. In order to commence her dance practice, Ghumman approached several dance institutes but she was rejected simply due to the reason that she was an amputee. Eventually, Rockstar Academy, an academy based in Chandigarh, accepted Ghumman's application and she started her training to audition for IGT.
A strict regime was followed prior to her stint in the auditions round that included exercising from 6 a.m., followed by yoga and then dance classes in the evening. Her determination paid off and Ghumman managed to clear the auditions round in front of a live audience and a panel of three notable judges - Kirron Kher, Sonali Bendre and Karan Johar. She performed on a Bollywood number, looking gorgeous in an elegant pink top and green skirt. In her second round, Ghumman shocked the audience and judges with her 2 minute aerial act. This 'one legged dancer' started being seen as a source of inspiration for myriad individuals. "Life has changed after India's Got Talent. I have got a new identity and people look at me as an inspiration," she says.
A determined Ghumman is now following her dream of becoming an actress. With the support of her mother, whom Ghumman describes as an inspiration, she is fighting to eliminate the societal dogma associated with differently-abled individuals and how they are perceived. "I hate the word disabled. I think disabled is someone who despite of having everything is unable is do anything." With her resolute outlook, she has certainly shaken the condemned conventional perspective and has risen as a perfect example of celebrating life despite the odds.
Prev Next