Azra Hussain and Hebah Hussaina are two Surrey community gems honoured as part of the 2021 Canada’s Most Powerful Women: Top 100

Azra Hussain and Hebah Hussaina are two Surrey community gems honoured as part of the 2021 Canada's Most Powerful Women: Top 100™. In the 19th annual event hosted by Women’s Executive Network, these inspiring ladies made history by becoming the first ever mother-daughter duo to be declared as winners in their respective categories. Both have made the community proud in more than one way, spanning over years of community service and involvement.

Azra Hussain is originally from the Indian city, Madras, now known as Chennai. Having lived what she describes as a relatively comfortable and cocooned life until the age of 17, tides turned upon the sudden passing of her father. Despite the surge of financial difficulties and pressures of legal battles, Azra successfully finished her Bachelor of Commerce at the University of Madras, majoring in Financial Accounting. After marriage, she lived briefly in the United States of America, where she and her husband welcomed their daughter, Hebah, into the world.

Hebah Hussaina was under 2 years old when the family made their move to Canada, not knowing a single soul. “It was very challenging to even find a place to rent because we did not have local references. It was coincidental that I ended up in Surrey. We hopped onto the Skytrain, getting off at every station to look for a place to live. The last station fell in Surrey,” recalls Azra. Thanks to a kind gentleman who agreed to a rental agreement, the family made Surrey their home. For lifelong-learner Azra, education has always been at the forefront. It is of no surprise, then, that her next step was to start pursuing her Certified General Accountant (CGA) designation, now known as Chartered Professional Accountant (CPA). 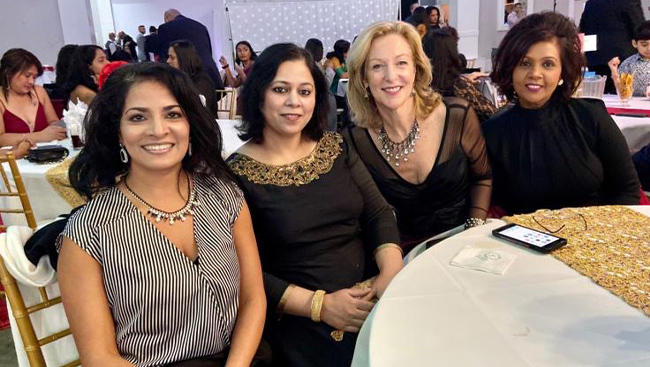 Azra’s love for learning also passed on to her daughter. A studious student, Hebah skipped a grade and went on to Grade 2 after completing Kindergarten. She details, “I think that was a formative experience because it definitely was a little isolating, as others saw me as that kid who skipped a grade. I did not have too many friends, so my escapes were the summer camps and art camps I attended at Surrey Arts Center. Here, I could be myself.” At such events, Hebah developed a love for volunteering and working with children. She still remembers being overly elated for her 12th birthday, as she was finally old enough to volunteer! Both for herself and her brother, such day camps turned into positive experiences, a big propellant of why Hebah wants to give back to Surrey so that other children can have the same opportunities. 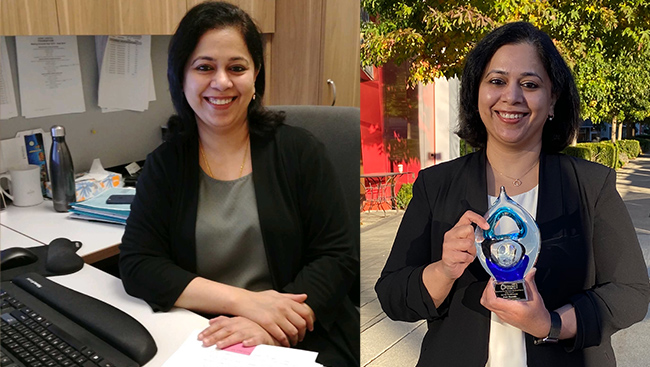 On the other hand, Azra’s current role as Chief Operating Officer of Surrey Hospitals Foundation came to be because of her joining the Foundation in 2009, where her involvement was initially rooted in finance work. She continued updating her education and credentials. Passionately driven by fundraising, the female powerhouse began getting more responsibility, surrounding operations, fundraising and human resources, and the rest is history.

With the work she is doing now, Azra describes that working on projects and being part of the Steering Committee is dear to her heart, “Once we fundraise from the community, it is important to make sure that the collected money goes to the right project. Given that the community is entrusting us to make these decisions, I get utmost satisfaction from the impact I can make.” Azra is a Certified Fund Raising Executive (CFRE), a professional designation in the fundraising world. According to Azra, working in the not-for-profit sector requires passion, and thinking about community impact is of great importance.

Much to the likeness of her mother, Hebah also has made strides in community involvement. She credits volunteering in helping her discover leadership qualities and realize her full potential. At the young age of 15, Hebah started the Youth for CARE initiative, a not-for-profit youth group which serves to execute fundraisers and raise awareness in the local community while engaging other youth in Surrey. She then went on to pursue her Bachelor of Science, with a major in Integrated Sciences, at the University of British Columbia, studying topics such as neurobiology, public health, anthropology, and psychology. Tracing back to the source of her interest in the sciences, Hebah recalls taking the Skytrain down to Science World, as a child, to attend camps and events. This instilled a desire to make science accessible to other children as well, which is why Hebah is now a well-versed speaker with organizations like TEDx and BC Tech Summit. Currently, Hebah works in BC Children’s Hospital, in the field of Injury Prevention Research and is also involved with the Science World Future Science Leaders program. 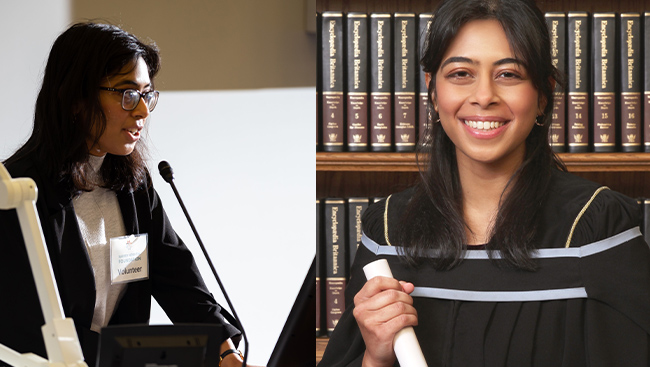 “Growing up, it was rare to see anyone that looked like me in Science, Technology, Engineering, Arts and Design (STEAM). It was disheartening, but luckily, I’m still younger in my career and things are changing. There’s still a lot of work to be done, but I’m keeping the thought in mind that I could be a role-model for somebody younger,” shares Hebah. To younger women striving to venture into the STEAM world, her biggest advice is to reach out and not hesitate to find help. Although it takes courage, finding likeminded individuals is important.

Azra’s advice for success treads down the same path of leadership. To grow professionally, Azra suggests, “Try to see if you can find a champion in your organization in a senior role, who you can approach and seek advice from.” Aside from that, Azra herself is a living example of lifelong learning and encourages others to keep developing their skillsets, upgrading professionally, and fostering connections. In turn, this helps develop “Confidence in your Competence,” which Azra believes to be key.

Working towards advocacy and wearing so many hats at the same time, life can sometimes be a balancing act for the mother and daughter. However, they always make it a point to prioritize family and have built a strong support system at home. Azra maintains that her husband is the family’s backbone and has always been a pillar of support. As one unit, the couple has been together through thick and thin – from navigating cultural barriers to dealing with extended family’s expectations. For the family, emotional support and balance have always been the glue that holds them together.

From a young age, Hebah has seen her mother involved in Parent Advisory Councils (PACs). Moreover, Azra would take her children to volunteering events and work-related gatherings to show them community involvement first-hand. This helped her little ones better understand the impact of community work, encouraging them to do the same. With her mother and father being formative figures in her life, Hebah reveals, “I have also instilled in myself the fundamental values of familial love and giving back to the community, for which my parents have been instrumental influencers.” 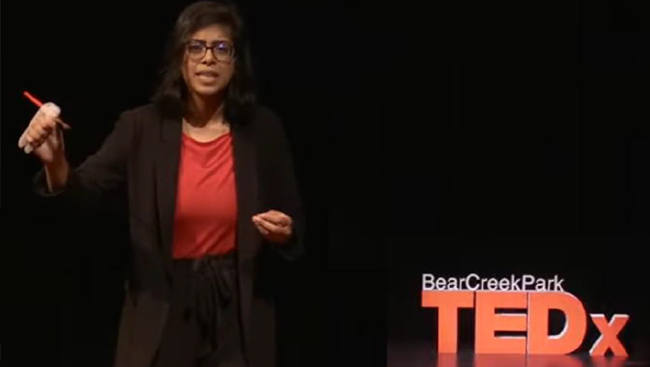 Azra herself says that the core of who she is comes down to her belief in charity, which is a value she learned from her own father. Now, seeing both her children so heavily involved in the community, life has come full circle. Aside from Hebah who is a dedicated community leader, Azra’s son, Fawzan Hussain, is recipient of the 2021 British Columbia Medal of Good Citizenship. “Giving back is a legacy we can be proud to leave our children”, states Azra.

Hebah shares that her mom has been her biggest inspiration and that she was rooting for Azra to win the 2021 Canada's Most Powerful Women: Top 100™ honour. She was surprised when she got the winning email herself and immediately got in touch with her mother, who was hoping that her daughter would win. Both were more so rooting for each other than themselves! When they realized the double win, the two immediately organized a conference call with the entire family of four to celebrate.

Undoubtedly, this mother-daughter pair is a shining example of women empowerment and all that is possible with the noble intentions of giving back. In fact, the Hussain family is a living testament to the endless opportunities enabled by Canada’s multicultural fabric, and how each citizen can be a catalyst in making our country, and our world, a better place. With powerful women like Azra Hussain and Hebah Hussaina taking reign as change-makers, we’re bound to see double the impact!

Team 4549B: The future of Robotics

In early March, the team won the BC provincial championship; they were named Tournament Champion and Robot Skills Challenge Champion, and won the Excellence Award. The team will soon be taking part in the World Championship in Kentucky, Louisville in USA.

“I figured if I didn’t get anything from this, I wouldn’t be disappointed, however if anything did come from it, it would just be a bonus and something to be grateful for,” he recalls.

Born into a Sikh faith, the boxer recalls a point around his teenage years when he consciously chose to accept the Sikh faith with its principles, which played an important role.

Bathe’s curiosity paved the way for a career in journalism. She grew up nurturing her curious nature, questioning and wanting to know everything that’s going on around her.

Recently inducted into the Canadian Medical Hall of Fame, Cardiac expert  Dr. Dhalla has been diligently working in the field of Experimental Cardiology with a focus on pathophysiology and pharmacology of cardiac dysfunction.