Home for Care and Reunion

S. Shamsher Singh, president of the organization, was in his late twenties when he established Prabh Aasra in a two-room rented accommodation in Chandigarh, India. Expanding from a two-room space to an expansive area, the not-for-profit organization has united more than 862 families not only in India but also Nepal, Sri Lanka, and Bangladesh. A popular case that recently received a lot of attention and attracted laud for Prabh Aasra’s efforts was of a mentally-disturbed woman from Bihar who was reunited with her family after 25 years.
A major project, Mission Milaap (reunion) was introduced at Prabh Aasra to unite lost ones with their families. Singh’s wife, Rajinder Kaur, co-founder of the organization and a psychologist by profession, explains that Internet plays an important factor in assisting them in this project. The team uses Google to find their patient’s city of residence and then contacts the police station of that city to report the missing individual. So far, under this mission, the not-for-profit has been able to unite more than 450 families with their lost ones. Kaur says, the people who arrive at their facility are usually suffering from mental health disorders such as dementia, which often leaves them stranded at isolated locations. “We go for the treatment and try to locate their home after they are healed and are able to retrieve their addresses. We trace their homes and try to reunite them with their families.”

With its successful rehabilitory measures, Singh and his team have created awareness about issues that have been ignored and silenced in the name of superstition. Singh’s wife talks about this by pointing towards the existing mental health act in India that has not been executed effectively. “If it (mental health care act) is implemented, you will find psychiatrists in every district and there will be a special helpline. There is a lack of awareness amongst people about issues.”
Kaur further explains the appalling lack of awareness by citing the scarcity of mental health facilities in India. As per a recent investigation conducted by Vice News, India is under a serious mental health crisis with only 43 government-run mental hospitals serving a population of 1.2 billion. The existing mental health hospitals survive on lack of governance and policies, cases of sexual abuse, forced shock treatments, admittance without proper diagnosis, and medication drugging. In a crisis as stated under the report, Prabh Aasra serves as a blueprint for India to role out solidified measures in this direction, or at the least acknowledge mental health as a serious concern. 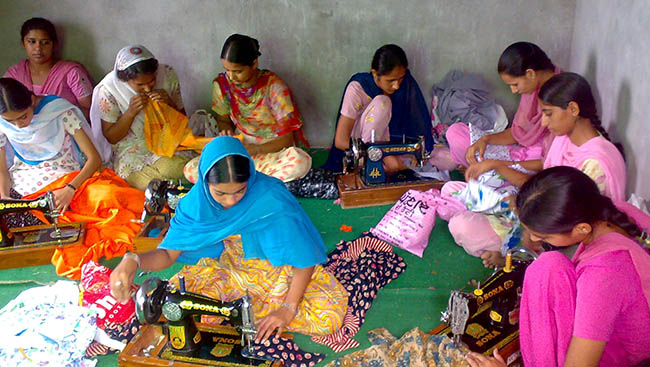 Despite the tremendous contribution to the lives of several families and individuals in all these years, Prabh Aasra is struggling for support in continuing its mission for reunion and rehabilitation. Until October 2015, the organization had admitted 1,260 patients out of which 862 have been discharged or united with their families after recovery. This means that 403 patients have to accommodate within the premises that is only sufficient for 150. “It is especially inconvenient during winters. We have patients that have contagious diseases and they don’t have a separate wing either,” Kaur states.
In recent years, Prabh Aasra has seen an influx of patients and this has resulted in inmates being accommodated in corridors and temporary sheds. Space is not the only issue hindering the function of the organization; other factors such as shortage of medical equipment and staff are also areas reflecting attention. Nevertheless, despite the challenges, past and present, Kaur and her husband are dedicatedly pursuing their mission of reuniting and rehabilitating victims of various tragedies and we salute their courage in this endeavour.
Prev Next

As a charitable hospital operating in Hanspukur and Sundarban, West Bengal, Humanity Hospital serves as a perfect model of affordable healthcare in a country like India where the majority of the population dwells in rural areas.

Boys Leading Girls Back To School

Husain’s agenda is clear - “The lack is not access to education, the problem is the mindset.”