In an exclusive conversation with Darpan, Indian-American cardiologist Dr. Swaiman Singh talks about the joy of selfless service and being part of the ongoing farmers’ protest in India.

Nothing captures the true essence of the festival of Vaishaki better than ‘Sewa’ — a willingness to serve others without the thought for your own wellbeing. Selfless service is one of the key ideologies of Sikhism, and Dr Swaiman Singh has undoubtedly been living by this principle every single day. Even his Instagram bio reads — ‘Field doctor. Ultimate goal is to serve. Not charity but solidarity.’ 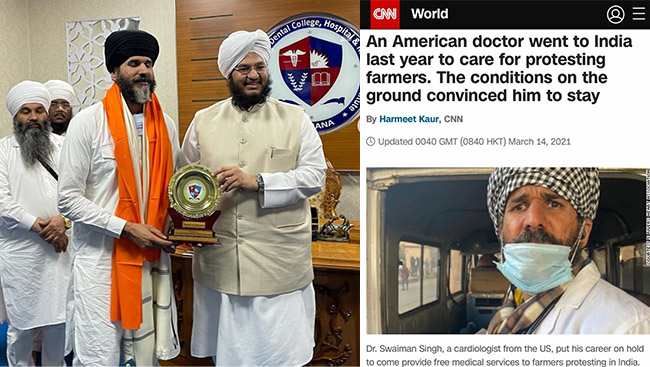 The USA-based cardiologist, who has currently anchored himself at the Delhi border in India as a solid support system for the protesting farmers, knows no other way to live than serving mankind. “Humanity above anything else,” Dr. Swaiman’s voice booms over the call as he talks about Vaishaki and the joy of selfless service.

Dr. Swaiman was born in Amritsar and moved to America with his family at the age of 10.

He saw his father and grand-mother suffer because of lack of healthcare. While it was heartbreaking to see them suffer, it motivated him to opt for a profession in healthcare and dedicate his life to serving others. 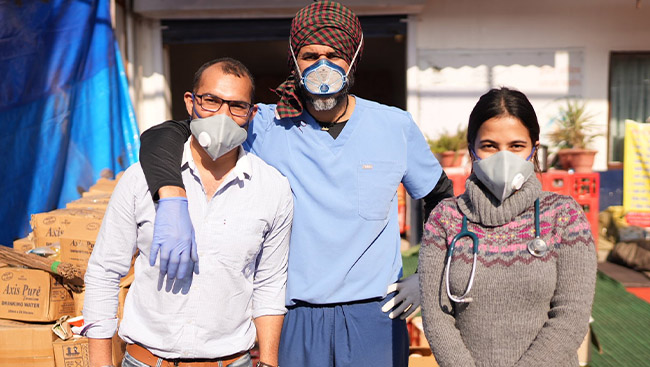 “I was born in Amritsar, and we moved to America when I was ten years old. We really didn’t take any money with us. I have seen my dad’s health suffer from not having insurance. We were scared to even go to a doctor there. My grandmother passed away in America because she didn’t get access to healthcare,” recalls Dr. Swaiman. He further adds, “Life was hard. In my second year, I was working at a gas station. I would go to school, come back and go to work. I lived a tough life -- got robbed at a gunpoint many times, was beaten up several times … but that part of my life has kept me grounded, and everything I am doing today is probably because of that. I have seen a lot of suffering, and I think that is what has made me take a stand whenever I see anything wrong happening around me.”

The hardship faced during his growing up years motivated Dr. Swaiman to become a doctor and do his bit for society. For more than a decade now, Dr. Swaiman has been persistently giving back to society not only by way of his profession but also through his organization – 5 Rivers Heart Association, which dedicatedly works towards healthcare and education. 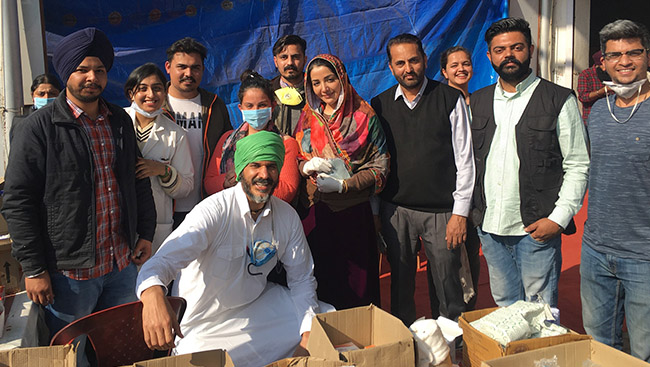 Speaking about the organization and the work it does, the doctor explains, “Our goal was to work in a couple of places like Africa, America and India. We have been holding medical camps for the past ten years, but our mission is not just medical camps, we plan to have full-fledged clinics, where patients are followed up, have medical services, have doctors on the ground etc.

Medical camps are just a start, where we go to see the needs of the people. Now we know what the needs are, and now we are making plans to solve those problems – we want to take healthcare on a global level. We want to do the same with education. So, these are two big things that we want to deal with in the future.” 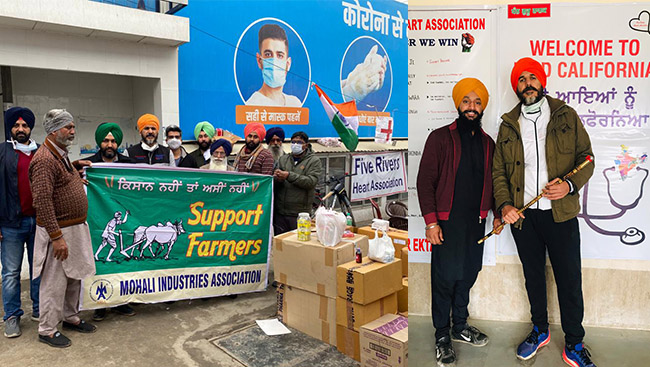 While Dr. Swaiman has big plans for the future of the 5 Rivers Heart Association, currently, he has been camping at the Tikri border in New Delhi for the past few months to serve the farmers protesting against the new farm laws that threaten their livelihood.

Ask him what made him leave his cosy life in the USA and go to India? And he simply says, “As I said, I have seen my dad and grandmother suffer due to poor healthcare, now that I am a doctor and have the power to provide healthcare, how could I not come back and serve when I was seeing my elders in India suffer?” 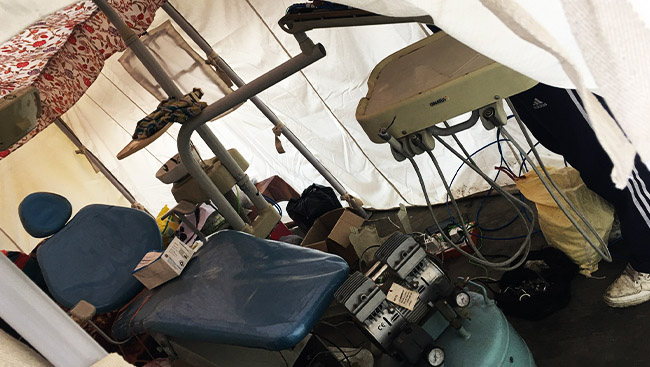 Like most families, Dr. Swaiman’s family too was a bit apprehensive about his decision to go to India, especially when the tension between protesters and the police were flaring up, but he was determined. “While my dad was happy with my decision, my mom was initially scared.

However, my sister told her that she was the one who taught me to live selflessly. She taught me about people like Bhagat Singh and what they did for our country. She told me stories about my grandfather, who severed in the army for 24 years. My great grandfather also gave everything he had for India’s independence… So, she convinced my mom to let me come here… this was my calling,” recalls Dr. Swaiman, who also found support in his wife. He adds, “My wife wasn’t hesitant at all. She was like — ‘it is a scary time but I can understand that there is a need, so I can’t really stop you. Good luck and do your best.’ I have a two-year-old daughter, who still wonders what her dad is doing. She asks my wife all the time — ‘why dad isn’t here?’ But now she tells people that her dad is with the farmers in Delhi. I don’t think she understands the context of it, but at least she understands that her dad is in Delhi, and he is taking care of farmers.”

Taking care of the farmers and how! Dr. Swaiman and his team of volunteers are putting commendable efforts to ensure that thousands of farmers and even policemen at the protest site are provided with the much-needed medical assistance. With ‘Protect our farmers’ as the new motto of his 5 Rivers Heart Association, Dr. Swaiman has also set up a night shelter — Pind California for over 10,000 protesters. He has also set up a library and is providing free food to the farmers. That is not all, Dr. Swaiman is relentlessly working day in and day out – from morning 5 am to often 2 am to help the farmers and even chronicling the situation on the ground to a growing audience on Instagram. And he has managed all this in a matter of few months. Interestingly, Dr. Swaiman had never planned all this when he decided to go to India. “I didn’t come here with a plan to do anything big. I had thought I would set up a clinic, bring on board some doctors, arrange for medication and go back in five days. I had no plan to stay,” informs the doctor. He adds, “All my people from Punjab were at Singhu border, but I was called at Tikri because there was a big need for doctors here. I thought I will come here and see what I can do. I was all alone, I bought a small table, few chairs, bought some medications and started a small camp.

The second day, I was joined by another person and slowly slowly we grew into a full-sized hospital, library, houses… so nothing was planned.”

However, the journey hasn’t been easy at all, there are plenty of challenges that Swaiman and the team face every day on the ground. Dr. Swaiman says, “Getting medication here is always a challenge, getting water, food even for our staff sometimes become a challenge but thank god, so far it is working well.” 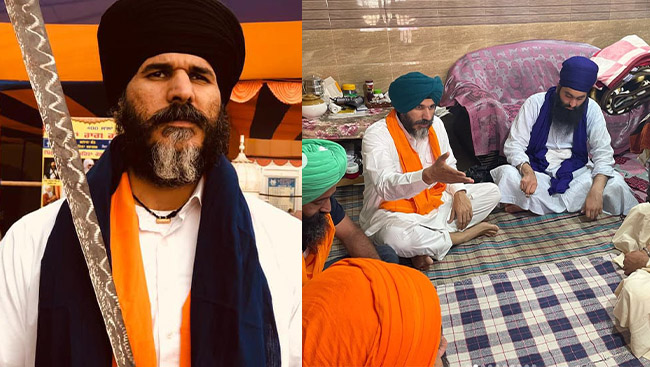 It’s been over three months since Dr. Swaiman Singh has been relentlessly working for the farmers. He and his team of doctors were even brutally beaten up by the police on January 26, 2021, while they were actually treating the injured policemen. But ask him about his experience so far, and with complete humility, Dr. Swaiman says, “Gifted!” He adds, “It is a blessing from God that I was able to come here and serve. I don’t think I would have been able to do this much service in my whole life if I wasn’t here. I think probably I have done my life time’s service by being here. So, I am just grateful. You know there are days when we are extremely hurt, we are saddened looking at our elders but on average we save about 3 lives a day here. So, when you do that when you save a life the feeling you get can’t be explained in words. I don’t think in my whole life I will be able to forget this time.”

Every day is a new battle on the protest site, but the immense love showered on him by the farmers keeps Swaiman going and helps him achieve new goals for the on-going cause. Currently, the doctor has appealed to the Indian government to provide his organization with the Covid vaccine so that he can administer them to the protesting farmers. While he has pledged to serve the farmers till this revolution ends, he only wants everyone else to be better informed about the laws before taking any sides.

He says, “Keep united and read about the laws before you make up your mind. Try to see where these laws will lead the people and the nation. So many people from around the world have said that this is going to lead to something bad. So, try to read it for yourself and see which way we are headed.” 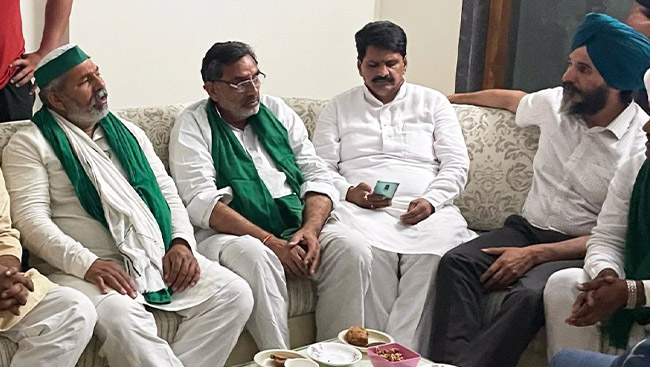 He further adds, “Anyone in India or anywhere in the world, who want to get involved with the farmers’ moment, I request you to please fast on Monday mornings, don’t drink your tea on Saturday evenings and bring that milk, flour, tea to the borders because people here are suffering, they are hungry. That’s it.” He sums up and gets back to what he loves doing the most — selflessly serving mankind.More power to him.

If anyone wishes to join the movement or donate to the cause — ‘Protect our farmers’, they can contact Dr. Swaiman Singh through his website: www.5riversheart.org or drop a mail at join5heart@gmail.com