South Asians among dozens charged in a major drug trafficking ring spawning Canada, US, and India

In May 2020, officers began an investigation, dubbed Project Cheetah, into a robust network involved in importing large quantities of cocaine, ketamine, heroin and opium into Canada. The drugs were then distributed across the country through a sophisticated system run by the traffickers.

Officers seized approximately $2.3 million worth of drugs including: Ten kilograms of cocaine, eight kilograms of ketamine, three kilograms of heroin and 2.5 kilograms of opium. Investigators also seized 48 firearms and $730,000 in Canadian currency. 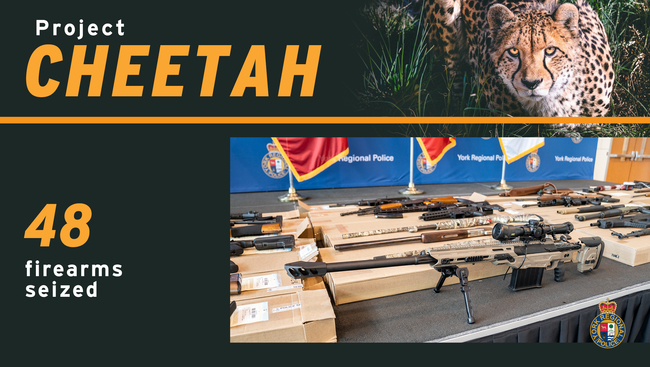 “The success of this investigation is a testament to the effective cooperation among multiple agencies across jurisdictions as we pursue the shared objective of public safety,” said Inspector Marwan Zogheib, Officer in Charge, RCMP Toronto West Detachment. “The RCMP’s resources across Canada and overseas and our partnership with York Regional Police provide a multiplier effect to our collective efforts to dismantle such criminal networks.”

“Peel Regional Police were pleased to have joined with York Regional Police and the RCMP on Project Cheetah. This drug trafficking network was active throughout the Greater Toronto Area and negatively impacted our communities,” said Superintendent Dermot Coughlan – Intelligence Operations. “By working together with our law enforcement partners, the project was successfully concluded and I want to thank the members from the multiple agencies for helping to make our communities safer.”

Through funding provided by the Ontario Government, the Criminal Intelligence Service Ontario supported this joint-forces investigation.

The investigation is ongoing.

The business community was looking for more signs of a post-pandemic focus, said Bridgitte Anderson, CEO of the Greater Vancouver Board of Trade.

Maclean’s ranks Delta as the best city in Metro Vancouver

Maclean’s ranks Delta as the best city in Metro Vancouver

Shooting at Langley Sportsplex leaves man in his 40s dead

The Langley Sportsplex houses ice rinks, daycares, and gymnasiums and was open at the time of the shooting.

Shooting at Langley Sportsplex leaves man in his 40s dead

1,456,946 doses of Pfizer-BioNTech, Moderna and AstraZeneca-SII COVID-19 vaccines have been administered in B.C., 88,335 of which are second doses.

The New York-based airline says it will launch flights between Vancouver and New York, as well as seasonal service to Boston, starting in the summer of 2022.

Mike Farnworth described the checkpoints as a type of "counterattack," often used to find drunk drivers, but this time meant to discourage recreational travel outside of a person's health authority.