From global announcements for the latest upcoming models to concept vehicles that aren’t quite yet ready for market, the show has a bit of everything.

While Detroit often hogs all the glory, the 2018 New York International Auto Show (NYIAS) is actually North America’s most well-attended automotive exhibition, which originally set down roots way back in 1900. From global announcements for the latest upcoming models to concept vehicles that aren’t quite yet ready for market, the show has a bit of everything. DARPAN has picked out sixof our favourite surprises to come out of the recent show.

The Lincoln Motor Company dug into its archives and resurrected a model not seen since the early 2000s: the Aviator. The aeronautical-inspired name and the fact that it was a luxury mid-size SUV are among the few traits the past and future vehicles will share. Lincoln unveiled a pre-production version at NYIAS ahead of the 2019 launch, and here’s the big kicker: it’s going to have a hybrid option.
“This is the first time we’ve combined plug-in electric technology with twin turbos and you’re going to experience quick yet quiet acceleration of an electric powertrain, but without the range anxiety thanks to its twin turbocharged engine,” says Jim Farley, Ford president of global markets, during a press conference, adding that RWD will be the drivetrain of choice in order to preserve a level of performance consumers have come to expect.
The Aviator is perhaps the sleekest looking product to come out of the rebirth era of the premium marque, showing off the signature grille comprised of miniature repeating star emblems, a sharply tapering roofline and a confident stance. Inside, three rows offer flexibility in seating yet doesn’t make the interior feel cramped. In fact the cabin is quite spacious, attributed to a clean and minimalistic layout. One might even describe the interior as evoking a sense of sanctuary, one of the four tenets – beauty, gliding, humanity and sanctuary – guiding the design philosophy behind the crossover.
Other highlights include the Lincoln Way app allowing drivers to fire up the ignition via their smartphone rather than carrying a key fob; Suspension Preview Technology that uses a camera to scan for imperfections in the road and then adjusts the damping level accordingly to minimize occupant discomfort; and the Co-Pilot360 suite of electronic driver safety aids.
While Detroit often hogs all the glory, the 2018 New York International Auto Show (NYIAS) is actually North America’s most well-attended automotive exhibition, which originally set down roots way back in 1900. From global announcements for the latest upcoming models to concept vehicles that aren’t quite yet ready for market, the show has a bit of everything. DARPAN has picked out six of our favourite surprises to come out of the recent show.

People got a taste of what could be a future Genesis high-performance battery electric vehicle when the upscale brand revealed the Essentia Concept, a zero-emissions gran-touring coupe. This EV is guaranteed to turn heads with its low-slung carbon fibre body, flashy butterfly doors and Genesis Quad Lights, which are razor thin, flush mounted laser optical head and tail lamps. A high-density battery pack and multiple electric motors help the Essentia get from 0 to 100 km/h in a flat 3.0 seconds.

Kia’s flagship K900 enters its second generation, appearing quite a bit different than the outgoing example. Jointly developed by the automaker’s design studios in Korea and California, the executive four-door car is slightly longer and wider than before and sports smaller “duplex” headlamps each housing new dual LED daytime running light strips. Dashes of classy satin chrome can be found in areas like the base of the doors, and at the back, duplex combination taillights brings about a sense of visual completion to the overall package.
A lot of vehicles today have ambient lighting, but how many setups were created in concert with the famous Pantone Color Institute? Among 64 selections, seven nature-inspired colours, emanating from the overhead console, door panels and passenger foot wells, possess Pantone’s personal touch. In addition, an intelligent lighting system uses proximity sensors to brighten 20 per cent when a hand is detected reaching for a switch on the dash. Under the hood is the same 3.3-litre twin turbo V6 from the Kia Stinger, producing 365 horsepower and 376 lb-ft of torque.

The best-selling sedan out of the Nissan camp is reborn boasting two new mills, automatic rear braking and, surprising for the segment, all-wheel drive. Aside from the standard 2.5-litre four-cylinder engine, customers can choose a variable compression turbo four-cylinder, the first such production-ready unit in the industry. In a nutshell, a proprietary device allows the pistons to independently travel varying distances within the cylinders that dramatically increases output and efficiency.

The BMW Group had one of the most fun world premieres at NYIAS: a fully electric powerplant stuffed into a classic MINI shell. The unique amalgamation is a way of celebrating a commitment to preserving its heritage, and to set the scene for the MINI 3 Door EV due out next year, coinciding with the nameplate’s 60th anniversary. The one-off restoration features dazzling red paint, a contrast white top and yellow MINI Electric badging similar to those on the plug-in Countryman. 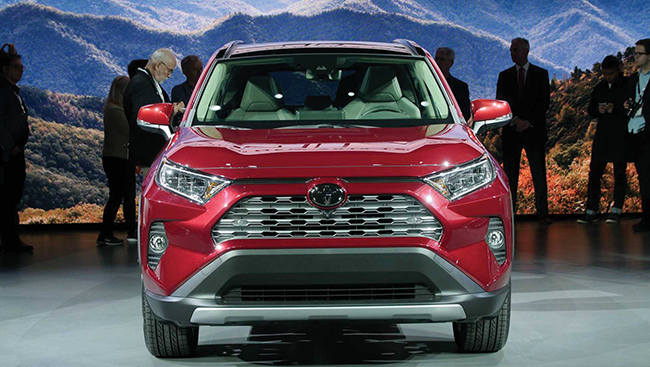 The best-selling vehicle in Toyota’s lineup receives a complete overhaul for the upcoming model year. Wearing the latest company face styling revolving around a bold hexagonal grille, the once diminutive SUV is not so much anymore gaining 30 millimetres in wheelbase length, 10 millimetres in width and an extra half-inch in ground clearance.
The RAV4 will be sold in two 2.5-litre four-cylinder flavours, both utilizing new Dynamic Force tuning. One runs on pure gasoline, mated to an eight-speed Direct-Shift automatic transmission, and the other is a hybrid driven by a continuously variable transmission. Toyota is also debuting an available Dynamic Torque Vectoring all-wheel drive system on the platform significantly improving traction in different environments.