Escalate to the next level

Utter the words “luxury car,” and the first thing most people will think German à la Mercedes-Benz and BMW. And rightfully so: the Europeans have a long history of building fine automobiles. That said, Cadillac is set on changing the conversation and getting a seat at the table with models like the first-ever CT4-V.
Before getting into the nitty gritty, a brief history lesson.

The reason the sports sedan exists is attributable to two major factors. First, there has been an obvious and ongoing effort company-wide to attempt to shed the stigma of being an old person’s car and appeal to a younger audience. Cue cool products such the Escala concept from which the CT4-V draws inspiration, and the recently announced LYRIQ fully electric luxury SUV.

Second, its creation is actually the culmination of more than 15 years of experimentation, following the launch of the V-Series performance sub-brand in the early 2000s that was responsible for the creation of the wild 400-horsepower CTS-V and other premium track-inspired, street-legal products. 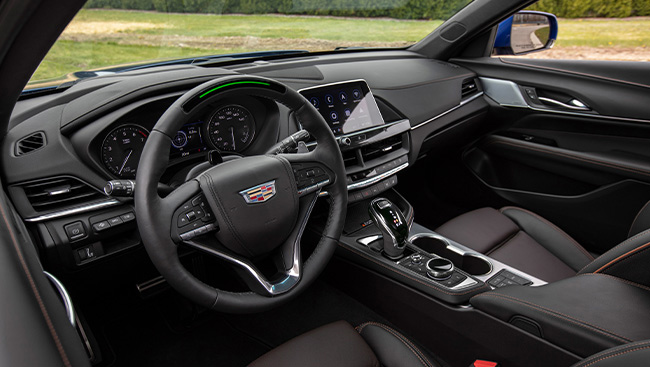 “We are inviting even more customers into the V-Series family by adding a new level of elevated performance between our Sport models and the ultimate, high-performance track capability that the V-Series has grown to represent.” The vehicle is beautifully proportioned boasting a long and wide stance, accentuated via optional equipment like the gloss black 19-inch wheels and bright Red Brembo brakes found on our GM-provided loaner. The darkened exterior details like the mesh grille, air intakes and body aero as well as quad-exit tailpipes indicate this is no regular CT4.

As a true driver’s machine, the cabin is set up purposefully so that all the controls are ergonomically placed allowing the focus to be on the task at hand. The seats, available with perforated Jet Black leather upholstery (+$1,845), look great and more importantly offer lots of support, and feature power lumbar massage up front. The interior is surprisingly spacious for a compact car, especially in the back bench area where there is 848 millimetres of rear legroom.

While the single-turbo 2.7-litre four banger under the hood isn’t quite as powerful as bigger brother CT5-V’s twin-turbocharged V6, the 310 horses — sent to either two or four wheels depending on the trim — are plenty while accelerating out of an onramp onto the highway or carving around the hidden backroad gems scattered across the Lower Mainland. 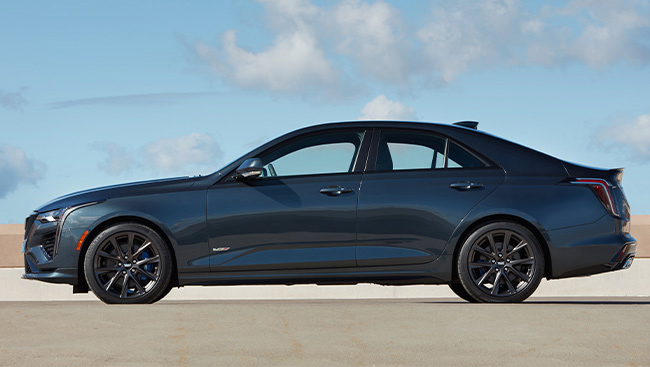 Thanks to a neat suspension system taking advantage of variable magnetic fields to control ride quality rather than a traditional mechanical valve shock setup, handling is sharp and stiff when you want it to be, or soft and supple for around-town motoring. Everything is customizable via the 10-inch touchscreen under the V-Mode personalization menu including the steering feel to the volume of noise coming out of the exhaust.

New for 2021 are two paint colours (Infrared Tintcoat and Rift Metallic), an upgradable 12-inch display (included in the Technology Package) and the latest generation of Super Cruise autonomous driving tech.