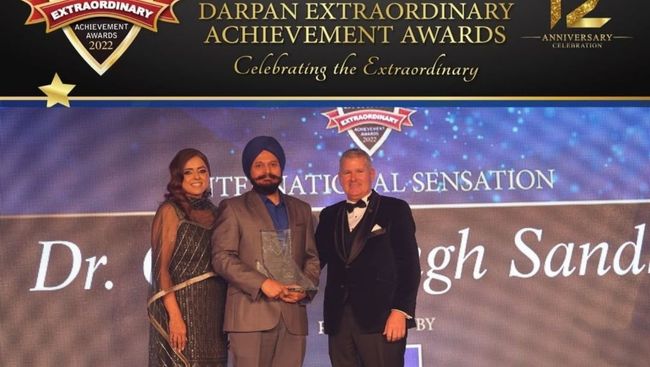 Dr.Gurtej Sandhu has over 1300 US utility patents in his name, more than the inventor of the light bulb, Thomas Edison. He is the only South Asian to be listed among 7 of the most prolific inventors on the planet.

One of  his early and celebrated inventions include his achievement in developing a method of coating microchips with titanium without exposing the metal to oxygen, which would otherwise oxidize the chips instantly and ruin them. Although the genius in him initially did not think too much of his invention, most memory-chip makers use his process today.

A Senior Fellow and Vice President at Micron Technology, a company worth $20 Billion dollars and one of the largest memory chip suppliers in the world.  At Micron, he has pioneered several process technologies currently used in mainstream semiconductor chip manufacturing. Dr. Sandhu’s expertise lie in the areas of thin film processes and materials, VLSI, and semiconductor device fabrication.

His memory chips are used in high tech products such as computing servers, phones, and automobile space widely utilized by Global Tech Giants such as Google, Apple, Facebook, IBM, Amazon, Microsoft, Tesla, Ford to name a few. In 2018, The Institute of Electrical and Electronics Engineers (IEEE) awarded Dr. Sandhu the IEEE Andrew S. Grove Award for outstanding contributions to solid-state devices and technology.

Not only are his inventions making an impact in the world but he is also giving his time and knowledge to the next generation of aspiring innovators. He is doing so by mentoring both engineering majors and faculty at Boise State University, now having held this role for over 18 years. His philanthropic acts involve him travelling around the world to provide better educational opportunities for underprivileged children. 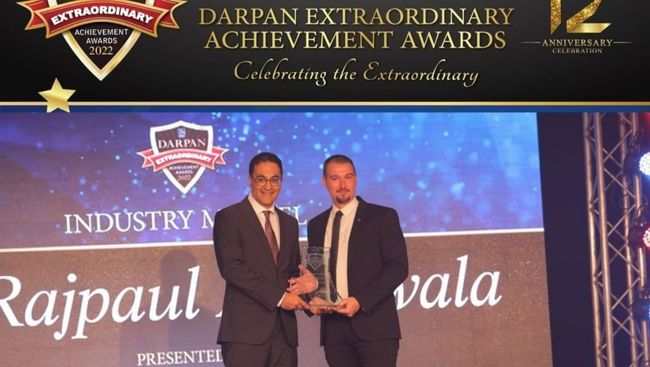 Dr.Rajpaul Attariwala owns his own MRI facility in Vancouver, Prenuvo, the first of its kind by a South Asian. He was able to apply his engineering skills into the field of medicine and create an MRI capability that can detect 9 of the top 10 cancers in stage 1 in addition to 500 other conditions. Patients fly in from all corners of the world to access this technology and it will transform healthcare by promoting health span with early detection and saving lives.

He has a Masters and a PhD in Biomedical engineering in Chicago at Northwestern University where he used advanced math to understand how the microcirculation of the body works, and built robots for some of the leading doctors in United States. After medical school in Calgary, Dr.Attariwala obtained a double residency in nuclear medicine, which looks at how things in the body work; and radiology, which looks at anatomy. 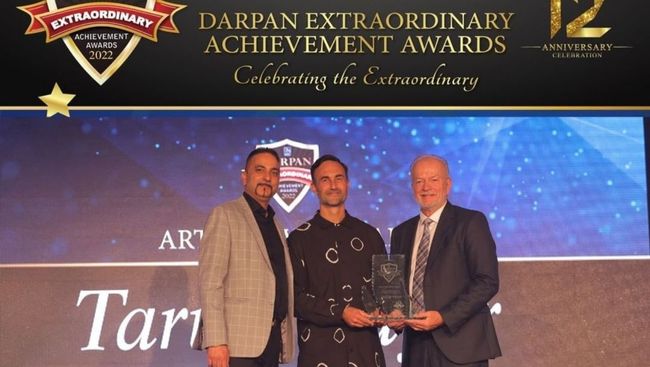 Tarun Nayar's interest in music led to the formation of the band Delhi 2 Dublin in 2006. He led the band to Glastonbury (UK), Burning Man (US) and almost 2000 other club and festival gigs around the world. He is the Executive Director of 5X Festival, Canada’s largest South Asian youth event. He is a board member of the Canadian Live Music Association, a member of FACTOR’s Diversity and Inclusivity Committee, and the leader of the 2019-2022 Music BC Trade Missions to Mumbai.

He is also the co-founder and owner of music company and label Snakes x Ladders which focuses on the new wave of hybrid South Asian artists. We were recently responsible for placing 2 songs by Surrey based artist Khanvict in the Disney show Ms Marvel. In his spare time, he makes music with plants and synthesizers under the moniker Modern Biology. He is a trained biologist and am fascinated with this intersection of science, music and spirituality. His project of mine went viral during the pandemic, doing over 100 million views online, being featured in The Guardian, Vice, and the The Verge, and has led to campaigns with some of the top artists in the world including Diljit Dosanjh and Stella McCartney and tour opportunities around the globe. 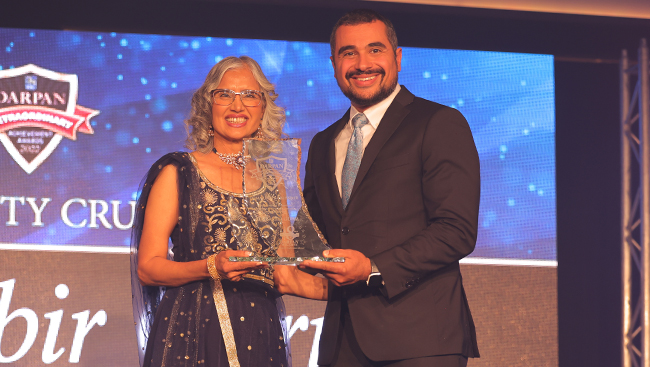 Dr. Gurm founded the Network to Eliminate Violence in Relationships (NEVR) with a mission to eliminate relationship violence. A recipient of multiple awards including in 2021 she received two YWCA Women of Distinction : Community Champion and Connecting the Community as well as the BC Achievement Award.

A true community leader who selflessly advocates for equity, access, and funding for oppressed groups. 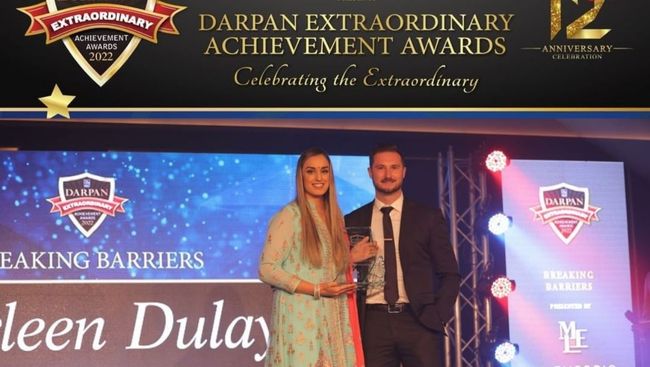 Harleen Dulay made history by becoming the first South Asian Canadian Woman to play NCAA Division 1 basketball. She was  2-time Canada West Allstar, a Canada West Champion in her final year and a Bronze Medalist at Nationals.Throughout her high school career, she was a 5-time BC Provincial Team Member, representing BC on different stages in Canada and the US.

After high school, she received a full-ride Division 1 Scholarship to attend the University of Nebraska. They won the Big 12 championship in her second year and went to the Sweet Sixteen in the NCAA Tournament. After graduation, she came back home and played 2 more years at UBC. After she finished her playing career, she  moved on to coaching basketball in the community.

In addition, currently she works as a Registered Nurse at BC Children's Hospital. And most recently, was also named as an Assistant Coach for the UBC Women's Basketball Team for this upcoming season. 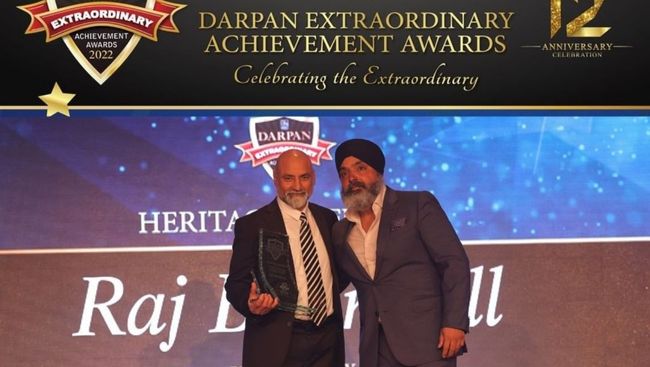 Uptaking the pious responsibility of guarding the rich history of the Sikh diaspora, Wanjara Nomad Collections by Raj Singh Bhandall has compiled a bespoke array of antiquities with the purpose of preserving, learning and sharing. The collection features invaluable books, maps, medals, ephemera, albums, swords, and art that traces back to various moments in Sikh history over past centuries. Our team has been privileged to be the holders of invaluable artifacts that span from the early 1600’s to date.

Included within our collection is a Sarbloh Simrini from the 1800’s, a 1st edition book signed by Maharaja Duleep Singh, a 1st edition of Military Memoirs of Mr. George Thomas, by William Franklin, and the unpublished war records of the 47th Sikhs.

Currently, Bhandall and his team are hosting an online museum, with a future plan to open a physical museum on the West Coast. Bhandall and his team  hope to share the artifacts in their possession, unapologetically from a Sikh perspective. Their vision remains to preserve, learn, and share artifacts relating directly and indirectly to the Sikh civilization. At the same time, they aim to be the catalyst to inspire others to preserve items in their possession. 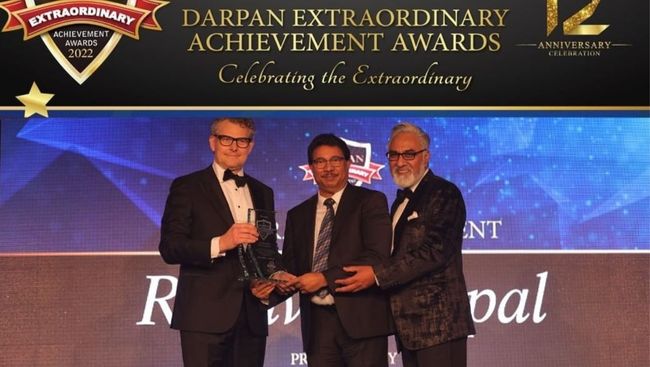 Raghwa Gopal, President and CEO, of Innovate BC and co-founded the very first technology company in the Okanagan. In addition to providing his time and expertise to local start-ups, Gopal helped raise money for community organizations. His donations involve over $500,000 to organizations like BC Cancer, YMCA, Rotary Club of Kelowna, and Women's Shelter.

Gopal has been a driving force in diversifying the economy of Okanagan region, from resource and service based, (in agriculture and tourism), to a much cleaner and more resilient - technology and innovation economy. He helps support and promote innovation in all sectors - and in all regions of the province. 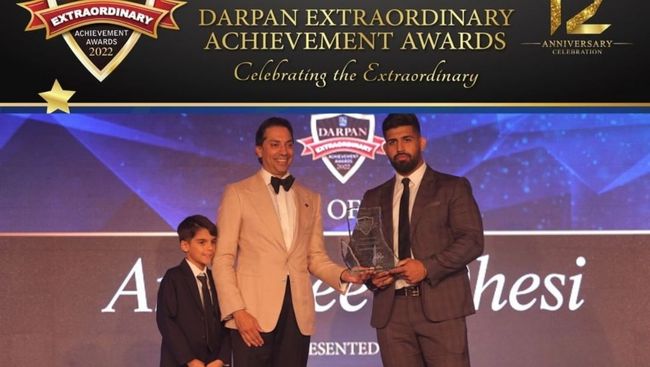 Dhesi currently wrestles for team Canada and the Ohio Regional Training Centre and helps coach at the Khalsa wrestling club.

Dhesi injured his ACL three times in a short span of six years and underwent two surgeries but never gave up. This resulted in him missing two seasons of competition for Oregon State University. Despite all odds, he kept going and had his best college season in 2018 when he won the second of his three Pac-12 titles and finished third at the NCAA Division I Championships earning him the title of Oregon State Male Athlete of the Year. He finished his collegiate career as a three-time All-American.

Dhesi made his first appearance on the international stage when he won 120kg gold at the 2014 World Junior Championships. He competed at his first senior worlds in 2018. 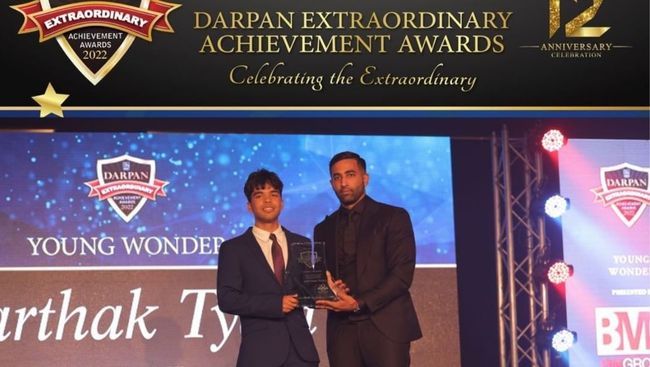 Sarthak Tyagi is the recipient of the coveted Schulich Leader scholarship, Canada's most prestigious undergraduate STEM scholarship valued at $100,000. He is pursuing computer engineering at UBC. A graduate of Queen Elizabeth Secondary, he was involved in many volunteering and fundraising initiatives. As the President of Learn Lab, he mentored at-risk students. The major goal of this program was to model and guide students toward making socially responsible choices. He used his passion for engineering to innovate an affordable Smart Navigation Cane to aid blind and visually impaired individuals. The cane scans the surrounding environment and buzzes when it detects nearby obstructions. He has been in contact with several Non-profit organizations globally to work with them to construct these devices.

Sarthak is the captain of his school’s Royals Robotics team, which qualified for the quarterfinals of the 2022 FIRST Robotics Regional Championship. He is also an executive member of the Royal Brotherhood Leadership group, leads a weightlifting club.

He routinely volunteers at the Surrey Food Bank. Additionally, he leads a community gala in his high school that has raised over $100,000 dollars for the Surrey Memorial Hospital.  In addition, he was chosen as one of 17 recipients across Canada for the 2022 Terry Fox Humanitarian Award for his voluntary work and community involvement. 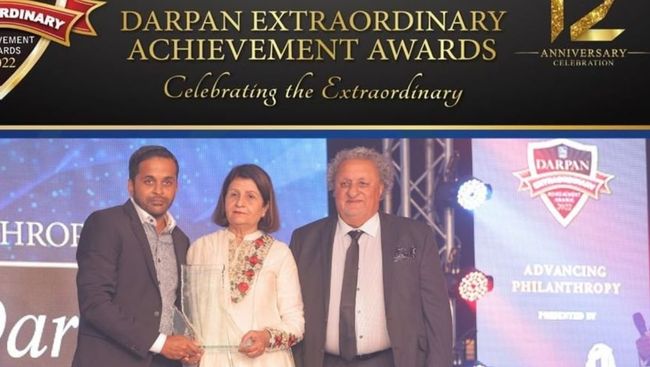 Couple Manjit Gill and Darcy Gill are the founders of the Darman Foundation and have helped many different organizations and charitable causes over the past 2 decades. They have been main donors with Langley Memorial Hospital, PICS, BC Cancer Society, and BC Children’s Hospital. They have donated about 1.5 M alone to the Langley Memorial Hospital Foundation. Over the years they have devoted their time by sitting on the boards at Langley Hospital and PICS for 10 years where they help bring services, facilities, and equipment to these organizations.

They have received many awards over the course of the years being a 3-time Paul Harris recipient from the rotary club, Queen's diamond jubilee, and citizen of the year among other honors. Their wish is to continue through the Darman foundation to give to the charities that they are passionate about and hope their children can continue what they have started for generations to come.

Legacy Talks presents Kal Dosanjh who was the recipient of the Darpan Community Crusader Award in the year 2016. He shares his experience of winning the award and some of what he has been involved in since.

Legacy Talks presents Jasmine Mander was the recipient of the Darpan Spirit of Sport Award in the year 2021. She shares her experience of winning the award and some of what she has been involved in since.

DARPAN is excited to announce its 12th Annual DARPAN Extraordinary Achievement Awards which is set to take place on October 7, 2022, in Surrey​​. We come together to celebrate the achievements of extraordinary South Asians. With Royal Bank of Canada as the presenting sponsor and the support of other valuable and esteemed sponsors, institutions, organisations and individuals, we bring this event to reality, every year.