By Shweta Kulkarni, 17 May, 2015 12:00 AM
He has done over 100 films and has been an intrinsic part of the Hindi film industry for over two decades, yet when he speaks about his work, there is an unmistakable zeal in his voice, an enthusiasm and passion that seldom reverberates even from newcomers. That is what makes conversations with the ‘khiladi’ of Bollywood even more interesting.
Though caught up in the thick of a tight shooting schedule, for his forthcoming film – Airlift, Akshay Kumar takes time out to talk about films, life, career, and cinema’s reflection on society.
Excerpts from an interview with the star.
With a set of different movies like OMG: Oh My God, Special 26, and Baby, which are not only appreciated by the masses but also by the critics, your career as an actor is on a different high right now, isn’t it?
You could say that. I am really enjoying my work at the moment. To interact and have the privilege of working with such inspiring directors as A R Murugadoss (Holiday) and Neeraj Pandey (Special 26, Baby), I could not ask for more out of my career right now. The turning of my tides has well and truly brought the best out in me, yet I have even more lined up for you all – the vigilante in me is going to break out good and proper this year, especially as ‘Gabbar’ is back ;)
And while there is Gabbar Is Back, there is a Singh Is Bling too. Clearly, you will continue to do masala potboilers, is it because it’s safer to do such films… in terms of the returns?
I never do films out of safety, on the contrary, the more different or dangerous it is for me to do, the more intrigued I am to push the boundaries and give it a shot. I have one of my favourite prequels going on the floors later this year. Yes! You’ve guessed it; Housefull 3 is coming back and how!  As much as I adore, and I mean ‘adore’ doing serious cinema, for my sanity and my funny bones I need to do a comedy at least once a year. I need that pleasure to restore my energy for the rest of my films. Action-reality drama is where my head and my heart will always be, but my soul needs its comedy. 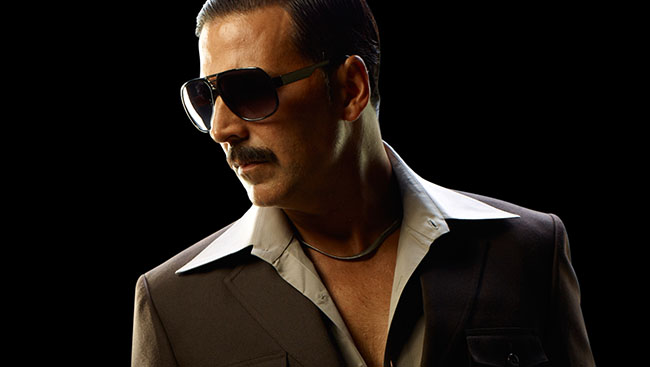 Your last film Baby showed some radical steps taken towards terrorism, for that matter even Holiday showed some drastic measures against sleeper cell activities. Do you think it is possible to implement such measures in reality?

Absolutely! Just the awareness of what my films have created has changed people’s perceptions on who they trust in their surroundings. From learning about the corrupt tax raids in Special 26, the religious thieves in OMG: Oh My God, to the sleeper cell activists on the very streets we walk in Holiday, and the undercover group taking risks in Baby – every one of these films have taught our people something, families have left the theatres knowing more than when they entered; that’s when you know you’ve made a good film, when the audience sits up and listens without you having to tell them.
These scripts were made to educate, to leave marks, they were not written to break records, they were written to make a difference. The more the people are aware of what really goes on around them, the more people are able to judge their surroundings, understand what is going on. It does not take a hero to stand up and make a difference, it just takes somebody.
Do you think movies like these can actually help bring about a change in society?
Actually, yes! Films may just be films, but they speak to people. In India, more people watch movies than read the news. If a film can spread a message, it means society is listening, if society is listening then so is the government. You will be surprised how much Bollywood has an impact on politicians’ lives. I have had Chief Ministers come to me saying, “That was a damn good plot; I’ll keep that in mind.” Despite what we think and hear, there is a lot more being done on a daily basis that we as public will ever come to know about.
Coming back to Baby and your association with Neeraj Pandey - you guys are fast emerging as the new hit ‘jodi’ in town. I hear Baby 2 is next in making.
Yes, I am extremely happy to announce that Baby 2 is in the pipeline. My director’s (Neeraj Pandey) mind never stops working; his ideas were ticking over for Baby 2 before we had even finished Baby.
Neeraj Pandey is one of the most intelligent directors in the business. He needs constant stimulation, he needs to be writing and creating his next piece whilst he is in the thick of his current piece. He is most alert, not the kind who will sit quietly in the comforts of his home, he needs to create whilst his mind is in overdrive. That is what is so powerful about him; he is a continuous mass of information.
You started working with Neeraj Pandey when he was just a newcomer. In fact, you are one of those few established actors, who do not hesitate to work with relatively new directors. How do you instill your faith in them?
This line of work is all about faith. With no faith, there are no risks, and if there are no risks, there is no point in calling yourself a hero – only heroes take risks. It is not only first-time directors I give opportunities to, I work with new producers, newcomers, new writers and also the so-called flop directors. They all deserve a chance; they are full of passion and desire to do their best. That very quality makes me want to put my faith in them.
Successful people can become complacent; they give less effort as they are so experienced, they think all their decisions are right because they were last time. Well, life does not always work like that in my eyes. I give as much effort now, as I did, when I was a struggler because I know what it is like to be hungry for food as well as for work. It is the strivers that deserve the biggest opportunities in any industry. I know that more than anyone does because I was ‘them’ once upon a time.

Since your debut film, there has not been a single year when you did not have a release. It has been over two decades now of working continuously…you never got tired or bored of it?
Tiredness is just pain leaving the body. There is not a day that goes by that I’m not tired, but I choose to make my days like that. We are here only once, no great story ever started with ‘Once upon a time I slept really well, and blah blah blah…I have been chasing my dream ever since I debuted 25 years ago, the day I take a film, even a commercial for granted, my days are numbered. When you love your job as much as I do, you don’t take it for granted. Therefore, monotony never kicks in. You have to make your path, you have to take chances – scary or not, successful or useless, I have to make my decisions and accept my consequences.

In this line of hectic work, it is so very hard to get bored – there is never a day that is same as the previous day, and that is the best part of my job. Also, I go everywhere and I do everything my heart desires, but only if I work hard enough for it.
It has been a while since you ventured into productions and have set up your own production company, what was the thought behind getting into the movie business? Has it made your life more stressful?
Stress is like your morning coffee – it is a ritual that you get used to after a while, without it we feel empty – like we have forgotten something vital. If our hearts are not pounding and our brows are not sweating, we are really not trying hard enough.
What is the one thing that you would like to accomplish this year professionally and personally?
Professionally: I would like my film Brothers to be the greatest fighting film of all time in India. I want it to inspire men, women and children across the nation. I have never poured more blood, sweat, and tears into a film than I have for this one. I have never had to be more prepared or be stronger mentally and physically as I have for this one. This is my dream; August 14 is a date, my heart pounds for this year.
Personally: I have already achieved it this year; or rather, I should say my wife has. We have extended our family home for our growing children, and we have waited a year for the plans and interiors to be finished. However, we delightfully moved in last week, so my biggest achievement to make my home a happy one has just increased by 10 folds. That is what this is all about, making the most important people in your life happy.
There are many new talents in the industry, who do you lay your bets on?
I am far too diplomatic to answer that question. We only need to remember this – we are lucky to have so many newcomers taking over our screens, that is what we should be focusing on. Not who is the best, but on the fact that they have the talent, and they are not afraid to use it.
You have achieved success and adulation from the masses, as an actor what do you crave for now? What is your dream?
My dream is to sustain it and remain loved in this industry for as long as my lungs permit to. Adulation is one thing to gain, but it is another thing keeping it. For now, I just want to keep finding new gripping scripts that hold my audience in suspense, at the same time I wish to spread as much truth and wisdom as well as laughter through my films as I can, before the day comes where I will be outnumbered by the youth, and outcasted by the public. Until then I shall keep dreaming!
Prev Next
ADVT