REVIEW: The Black Prince Is More Educational than Engaging

Jorge Ignacio Castillo, 19 Jul, 2017 02:44 PM
A new trend in moviemaking is film productions more concerned with creating awareness than succeeding commercially.
Earlier this year, The Promise used romantic drama tropes to bring attention to the Armenian genocide at hands of the Ottoman Empire (still unacknowledged by Turkey). The Black Prince is more open about its intentions, but the underlying principle is the same.
The film covers the entire life of the last king of Punjab, Maharajah Duleep Singh (singer/songwriter Satinder Sartaaj). Taken as a child by the British following the annexation of his kingdom, Duleep grows up surrounded by riches and privilege, with a direct line to Queen Victoria.
Homesick and wistful, the young Maharajah reestablishes contact with his mother, who resents the Brits and dreams of a free Punjab. She succeeds at planting the seed of rebellion in her son’s heart, who soon finds out the Crown doesn’t have the Sikhs’ best interests at heart.
A frequent problem staging real events for film is that history is unwieldy. The Black Prince never strikes a dramatic flow as the Maharajah’s attempts to do good for his homeland fall flat time and time again, preventing any build up. It doesn’t help that for half the film Duleep Singh has no agency whatsoever, or that most of the dialogue is exposition. 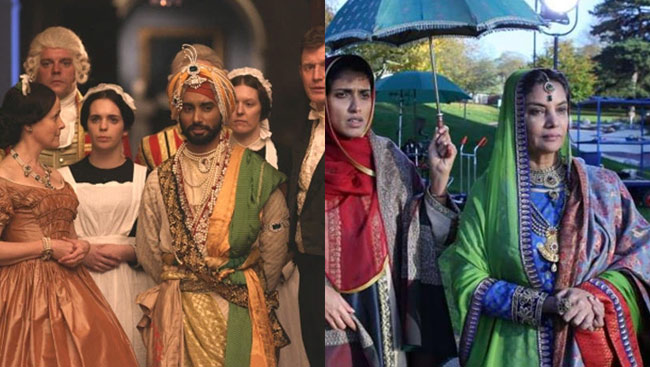 One bet that fails to pay off is casting Satinder Sartaaj as the Maharajah. Never mind how naturally charismatic Sartaaj is, Duleep Singh is a massive role to undertake for a first-time actor and the musician comes short.
At least two of the supporting performers are up to the task though: Shabana Azmi (Neerja) is a force of nature as the Maharajah’s mother and Jason Flemyng is believably conflicted as Duleep’s foster father.
The Black Prince does look stunning: The recreation of both XIX Century Punjab and England is gorgeous. It’s a pity the script is not at the same level: Writer/director Kavi Raz (better known from his high profile stint in St. Elsewhere) can’t escape biopic clichés and ends up sacrificing dramatic weight for historic accuracy.
The film ends with a poignant reminder that the rests of Maharajah Duleep Singh remain in England, despite his desire of having his body cremated and his ashes brought to Punjab. To this day, the matter remains divisive and unsolved.
The Black Prince opens this Friday 21st at the Landmark Cinemas in Surrey.
Prev Next

WATCH Aaron Carter Breaks Down In Tears After DUI Arrest: 'I Do Not Drink Alcohol At All'

Singer Aaron Carter, who was arrested on the suspicion of driving under the influence as well as possessing marijuana, broke down while addressing the issue and said that he doesn't drink alcohol at all and is ready to give polygraph test.

WATCH Aaron Carter Breaks Down In Tears After DUI Arrest: 'I Do Not Drink Alcohol At All'

Filmmaker Anees Bazmee, who anxiously awaits the release of his forthcoming comedy film "Mubarakan", says he doesnt have any intentions to act and is happy staying behind the camera.

Multi-gifted artist, singer, composer and Sufi poet, Satinder Sartaaj, has added yet another feather to his cap with his acting debut in the Hollywood film, The Black Prince.

When Arjun Wanted To Be Worthy Enough For Anil Kapoor

Actor Arjun Kapoor will soon be seen sharing screen space for the first time with his uncle Anil Kapoor. He says it's always been a dream for him to work with the veteran actor-producer, but he didn't want it to be due to their personal relationship.

When Arjun Wanted To Be Worthy Enough For Anil Kapoor

Singer Ed Sheeran made his "Game of Thrones" debut in season seven premiere.