Troy Ribeiro IANS, 23 Jan, 2018 01:24 PM
Director: Sanjay Leela Bhansali
Cast: Ranveer Singh, Deepika Padukone, Shahid Kapoor, Jim Sarbh, Aayam Mehta, Ujjwal Chopra, Raja Murad, Aditi Rao Hydari
Rating: * * *
All the political brouhaha that surrounds this film is unwarranted.
Inspired from the epic poem, Padmavat written by Malik Mahummad Jayasi, which is considered a fiction laced in history, the film is a work of art that is mounted on a lavish scale.
Set in the thirteenth century, the poem and the film named after the legendary Rajput queen of Mewar, in actuality is the story of Alauddin Khilji, the Turko-Afghan ruler of the Delhi Sultanate.
It exposes Khilji's obsession for the beautiful queen. After hearing tales about her, Khilji lays siege to the Chittor Fort in Rajputana to capture her. But the brave and righteous queen along with the other women of the palace, in order to save their honour commit jauhar - self-immolation.

Technically the film is astutely mounted. The director has laboured over the production designs which include the sets, locales and the costumes. Visually every frame is extravagant and enthralling. The lengthy shots with seamless camera movements give an enhanced cinematic experience. The wide-angle shots capture the locales beautifully.
The film is well-executed and has all ingredients of a block-buster, but the wow-factor is missing.
And the fault lies in the writing. This story is not weak but its execution definitely is. Every scene, from beginning to the end, is dramatised to give the story a larger than life feel and thus in the process, the finer nuances of the characters are lost.

Case in point is the introductory scene of Padmavati and Maharajah Ratan Singh of Mewar. They meet, but at no stage does the film establish their chemistry. Their romance is very perfunctorily projected.
This apart, the plot laden with cinematic liberties and verbose expositions, makes this poetry on screen a bland affair as the shock value is tempered.
What keeps you hooked are definitely the performances. Every actor is in the skin of their character. Ranveer Singh as Alauddin Khilji is pulsating with his onscreen energy.
Deepika Padukone as Rani Padmavati is effortlessly convincing. Shahid Kapoor as Maharajah Ratan Singh has a restrained demeanour and is competent. 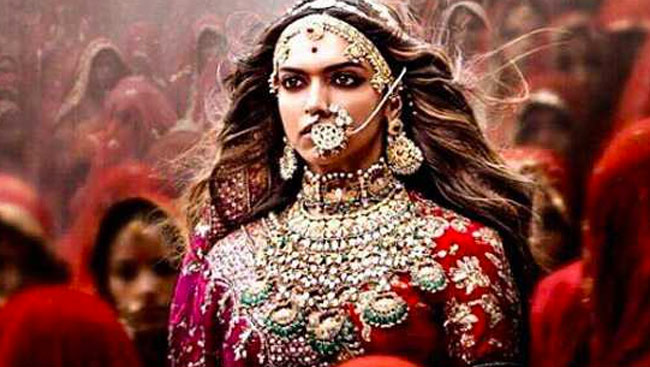 In special appearances - Raza Murad as Jalaluddin Khilji is captivating whereas Aditi Rao Hydari as Khilji's wife Merunissa is wasted.
But it is Jim Sarbh in a supporting role as Malik Kafur the prominent eunuch slave of Alauddin who lights up the screen. A prolific actor, it is interesting to watch him emote. And his myriad expressions are definitely a treat to watch.
As for the 3D effects, initially they are a bit distracting, but over a period of time, with the mesmerizing camerawork, the viewing experience is smoothened. But the animations lack finesse, especially in the scene with the ostrich.

As always, Sanjay Leela Bhansali's films rank high with its music and back-ground score. This one is no different. The dances and the action sequences are well-choreographed. The songs integrate seamlessly into the narrative. But it is the songs, "Khali bali ho gaya hai dila" and "Ghoomar," that stand out.
Overall, this tale of valour is indeed a visual spectacle but lacks the soul.
Prev Next