“When I get messages like ‘I’ve never seen someone that looks like me on screen’ I’m reminded that this is a part of something bigger.”

Geraldine Viswanathan has made a point of choosing roles that make impossible to pigeonhole her: In Blockers she was the rebel daughter set on making her senior prom a memorable one; in Bad Education, Geraldine was the overzealous student that uncovered a massive case embezzlement in the New York educational system; In Hala, the actress became a Pakistani-American teen torn between her upbringing and the world opening in front of her.

In person (if over the phone) Geraldine is as irrepressibly upbeat as her characters. Laugh comes easy to her and she’s polite enough to ponder every answer, even if the question has been posed to her dozens of times.

Viswanathan is back on screen as the lead in the romantic comedy The Broken Hearts Gallery (available on demand November 24th). Much maligned for several years, the subgenre is making a comeback by deconstructing the formula and increasing diversity in the casting beyond the token “best friend” role: “I was born in '95 and didn't feel like I saw myself reflected on the screen, especially in romantic comedies. I think it was pretty much exclusively skinny, white girls.”

While not her first time as the lead, The Broken Hearts Gallery is Geraldine’s most high profile role to date, one in which she had direct input: “We would be rewriting scenes the morning before. It was very loose, we improvised a lot.”

The actress’ name gives you a good idea of who she is. Her parents named her Geraldine after their favorite movie star, Dr. Zhivago’s Geraldine Chaplin. Her middle name is Indira.

While she was born in Australia, Geraldine’s father is of Malaysian Tamil descent and her mother is Swiss-German: “I was pretty much the only brown kid in my school. I felt very on the outside and overlooked”. The actress is well aware that she has benefited from an industry making strides towards diversity: “I feel very fortunate to be entering (the industry) at this time where I am able to play a leading role or a role where I don't feel completely defined by my ethnicity. When I get messages like ‘I’ve never seen someone that looks like me on screen’ I’m reminded that this is a part of something bigger.”

Whenever not making movies, Geraldine has a regular gig in Miracle Workers, a hard-to-find show despite a high wattage cast that includes Daniel Radcliffe and Steve Buscemi. The actress goes from playing an angel to a peasant from one season to the next (worth mentioning, her ability to mimic an American accent is uncanny). It’s the one performance at this early stage of her career she wishes more people has seen.

During her self-isolation due to COVID in New York (sharing a roof with Susan Sarandon, who happens to be her boyfriend’s mom) Geraldine learned glass-cutting. “I bought this little contraption and used it on bottles of Corona beer to fill them with candle wax. I gave them away with a little message: ‘When life gives you Corona, make a candle.’” 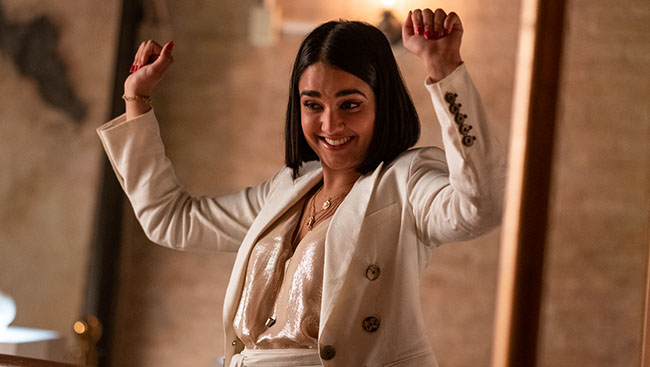 Q & A with Geraldine Viswanathan

Your character in The Broken Hearts Gallery is very easy to relate. Is there any aspect of her you found challenging to portray?

Her extremity in her collecting of things. I love holding on to mementos from experiences and relationships, but I don’t keep crab cakes from a date. I draw the line at anything that rotes.

Watching the film, I recognized an acquaintance of mine in a minor role. He described you as “the most gracious number one he has worked with.” Do you make a point of creating a welcoming environment?

That’s so lovely. I’m so unaware of being number one on the call sheet, I want to talk to everyone. I want everybody to feel creatively free and as excited as I am. It felt like a dinner party and we had new guests every day. It so strange to me that people are not nice to others on set. We’re so lucky to have this job and I feel nothing but gratefulness.

Once a director told me to do something different every take and that unlocked a lot of things for me. That’s my favorite nugget of wisdom, along with having fun. Fun is infectious.