Large and in charge, the totally redesigned 2021 Cadillac Escalade returns with an even bigger footprint than its predecessor. The fifth-gen vehicle not only wows by offering more interior space than ever before, but showcases some segment-leading electronic innovations befitting brand’s flagship. 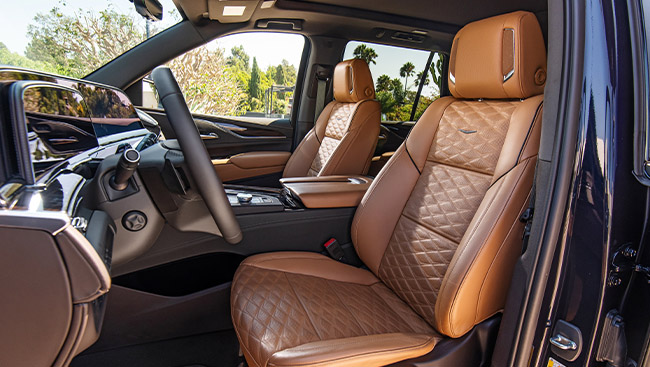 “There is something special about driving an Escalade,” says Cadillac president Steve Carlisle in a news release. “It has the bold presence and exclusive technology to elevate the extraordinary and make every drive feel like an occasion.”

Climbing into the 1.9-metre-tall SUV is no easy task — fortunately power-retracting running boards extend out once the doors are opened. Once inside, the most impressive visual element is arguably the industry-first 38-inch curved OLED (Organic Light Emitting Diode) display serving as both a digital instrument cluster and infotainment hub.

The touch-sensitive panel, split into three sections, is fully customizable and can display things such as cool augmented reality-enabled navigation. Dynamic arrows are overlaid atop a live street view that point to the direction of travel. A caveat of the futuristic layout is a steeper-than-normal learning curve: it took me about 10 minutes to figure out how to reset the trip computer located on left side. 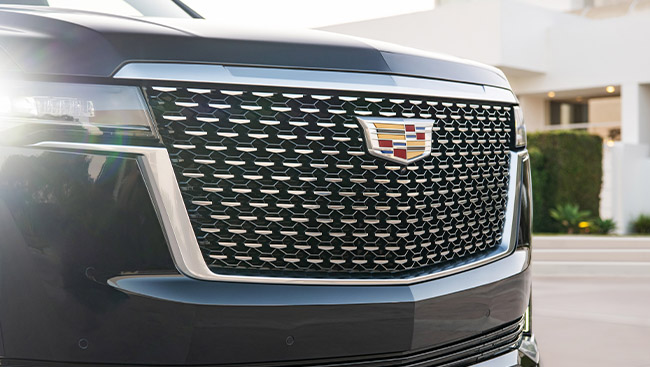 As alluded to above there’s a lot of additional room for occupants in the back — 40 per cent more, in fact — due to an increase of 180 millimetres in vehicle length. The upgrade to storage capacity is more dramatic still, growing a whopping 80 per cent to now 773 litres behind the third row.

Normally such a long shape would be a pain to park, however parking sensors and a feature called Surround Vision comes to the rescue. Four exterior cameras provide a bird’s eye view, which is an absolute life saver when attempting to squeeze into omnipresent “small car” spots in the city.

One of the areas of the Escalade Cadillac has been marketing quite heavily is the stereo, and rightly so. Partnering with California-based acoustics specialists AKG, the audio system is made up of 36 speakers installed all around bringing new meaning to the term surround sound.

Boasting a curb weight of 2,640 kilograms, no less than a 6.2-litre V8 engine will do. Although pumping out 460 horsepower, the metallic behemoth unsurprisingly feels heavy especially under heavy braking.

Four-wheel drive and Independent all-around suspension helps wrangle all that mass during cornering, and the optional adaptive air suspension with magnetic ride control makes every drive a smooth one thanks to an ability to constantly monitor road conditions and automatically adjust dampening to compensate for any bumps encountered. 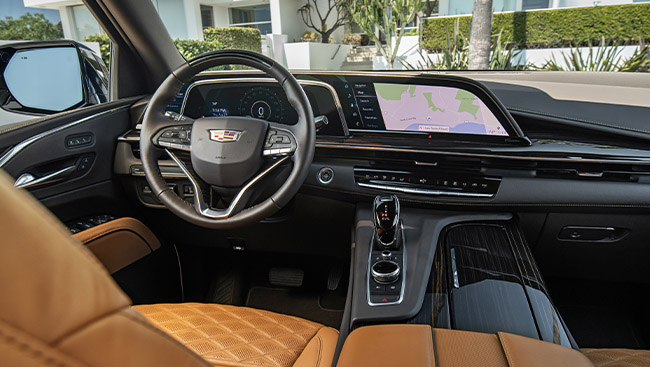 I haven’t touched on the styling yet and objectively speaking the SUV looks badass. Not just because of its imposing size, but the coat of Dark Moon Blue Metallic paint, signature vertical LED lighting, 22-inch “Dark Android” finished alloy wheels, dual exhaust tips and matte chrome trim on our Premium Luxury grade. A Sport model is also available wearing a black mesh grille and dark accents.

The 2021 Cadillac Escalade is built at the company’s plant in Arlington, Texas.