"As a Speaker, I have decided that this Spring I will be visiting lots of schools to talk about racism, to talk about politics and politicians, and to let young people know why it’s so important for them to be involved and understand politics.”

Tell us about your journey from Punjab, India, to Canada.

Before I came to Canada in 1973, I was active in the student union movement in India. I was the general secretary of the student union. I was involved at the local level and dealt with issues faced by the students regarding their tuition fees and similar other problems.

Did you always know that you wanted to be a politician?

I never thought about being part of the political system here in Canada. I didn’t think about it but coming here as a young student with knowledge of Indian politics, it became a part of my normal thinking to be aware of the political issues going around in India.

Tell us about your political journey in Canada.

I’ve been involved with the party since 1975, but wasn’t overly active. I was very much inspired by Dave Barrett who was the Premier at that time. I came to know him very well and we became friends. So I became quite involved with the Party at that time; Penny Priddy was the MLA for Surrey-Newton. I was the president of our constituency’s riding. I’ve been on board with the trade union movement right from day one. I was the head of the collective bargaining department with the Hospital Employees union. In 2001 I moved to Burnaby from Surrey. So I quit the riding of Surrey-Newton and transferred my NDP membership to Burnaby-Edmonds. It has been a very exciting time; I worked with many different MLAs and political leaders. It has been a great learning experience for me meeting with people like Penny and other MLAs like Moe Sihota who was and still is a close friend. So that’s how my political journey has continued. 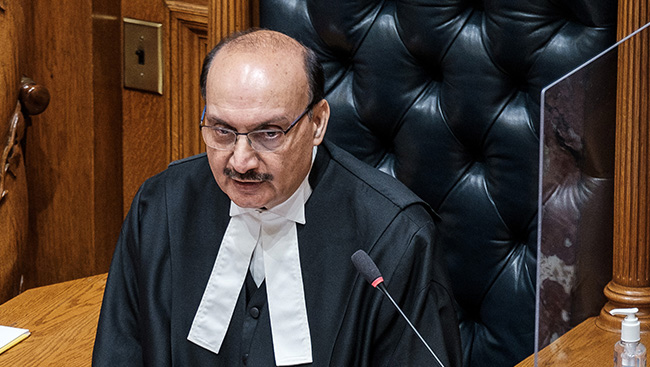 What does being the first-ever South Asian Speaker of the House mean to you?

It’s an honor. It’s a milestone not only for me but also for our community. There was a time when people of colour were not even allowed to vote. We were not allowed to go to the legislative building; people of colour were kept out. The right to vote was taken away, and then Komagata Maru happened. So since 1895, our pioneers had to struggle to make sure that we, the next generation, are able to enjoy the fruit of their struggles. That’s what has allowed us to be where we are today.

How did the BC NDP party and your colleagues react when news about you being elected as Speaker of the legislature was announced?

I was very humbled with the amount of support that I received - from the NDP colleagues and also equally from the opposition parties. They openly and publicly congratulated me for being elected the first South Asian Speaker to the legislative assembly. I received immense enthusiasm and support. In the legislature, regardless of different parties and backgrounds, I have enjoyed very close and respectful relationships with all of the members. So their support means a lot to me.

Why did you form the Canadian Farmworkers’ Union?

In the 70s, the face of farmworkers in BC had changed. Earlier in the 30s, 40s and 50s, the people who worked in the field were Italian and minorities such as Chinese and First Nations. But majority of the people who worked in the Fraser Valley fields were South Asian elders. During summertime you would see lots of young people as well. There were no proper laws to protect farm workers. They were not even deemed workers under employment standards and the health and safety regulations were not applied to them. I got concerned and after talking to my friends, we decided to do something about it. I have had the honour to work with people like Professor Hari Sharma and Dr. Chin Banerjee. We also had people like Charan Gill join our movement. The Canadian Farmworkers’ Union was formed in April 1980. It wasn’t a traditional type of trade union. It was more like a social movement because we wanted to raise awareness and a level of support amongst everybody to put pressure on the government at that time to change those laws. So we had support from the faith groups, the union movement and the students. Almost every university in Canada created a support committee to support farmworkers when  I visited them and spoke about foreign workers rights. The Canadian Farmworkers’ Union is also the first of its kind in the history of Canada.

What are some roles and responsibilities that you’ll be looking after as Speaker?

My first concern is that during these challenging times it is more important than ever that the MLAs of all parties are able to work together constructively to support British Columbians. The absolute priority would be the health and safety of MLAs and staff in order to maintain physical distancing. We only allow limited number of MLAs in the chamber at one time and the rest of them participate virtually from their home. Hopefully that will change with the vaccination and more people will be able to come in person to the legislature when we start the next session in March. My utmost responsibility in the legislature is that all MLAs and our staff work safely and constructively with each other. 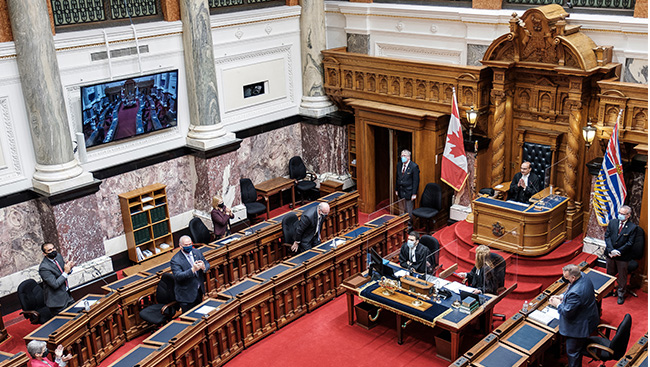 As a founding member of the B.C. Organization to Fight Racism, how much work do you feel needs to be done in the political sphere towards human rights and racial equality?

That struggle continues. Fighting racism is not over. In the 1970s, when we were actively opposing and fighting racism, people were targeted and even killed. Now what we have is a very subtle type of racism but it still exists and continues. So we have to make sure that as a government we have policies which are openly implemented and designed in such a way that all minorities, be it First Nations, people of colour or women, have equal opportunity to participate at every level of government and  government institutions. We still don’t have the same number of people in high profile positions as it should be according to the population ratio. We still have to work hard on it. As a Speaker, I have decided that this Spring I will be visiting lots of schools - elementary schools and secondary schools - to talk about racism, to talk about politics and politicians, and to let young people know why it’s so important for them to be involved and understand politics.

How will you make sure you serve the needs of Burnaby residents as their MLA now that you’re also Speaker of the BC legislature?

I want to thank the people of Burnaby-Edmonds for continuing to put their trust in me to represent them. I was first elected in 2005, since then I have had this honour and trust of my constituents in Burnaby-Edmonds. Without their support over the years, I would not be in this role today. I do my best to participate in most of the events taking place in the community, although very limited now. While the role of Speaker comes with the duties and responsibilities, I remain committed to serving my constituents, my staff, and I will, continue to do my utmost to assist any community members who come to my office with whatever issue they have.

What’s your message to young people interested in pursuing a career in politics?

I am really pleased to say that since I was elected as Speaker, I have received so many messages from young people about how excited they were and how honoured they felt that finally there’s a future for them. I’m going to be reaching out to young British Columbians to encourage them to be part of political activities at the local level. Somehow there is a negative feeling about politicians in people’s minds. All the policies regarding education, tuition, seniors or affordability is done at the legislative level, so it’s important for the young people to understand that and to participate actively to make a change. If they’re not happy with the current situation, they have the power to change it. And if I can be of any help, I’ll be more than happy to assist them.