Harbin placed first among 64 other contestants to be known as B.C.’s best junior speller.

At the Spelling Bee of Canada, success is just a word away! This year, the success story is close to home as Khalsa School Newton’s Grade 4 student, Harbin Kaur, prepares for a national-level competition, Spelling Bee of Canada (SBOC) Championship. Held on November 29, the final stage of this competition features 23 regional winners from all over the country; Harbin placed first among 64 other contestants to be known as B.C.’s best junior speller.

When asked about how she felt at the time of her win, Kaur replies, “Nervous! I knew that the words in the final round are going to be hard.” Similarly, the parents, Hakuljit Singh and Sonia Kaur, felt a mixture of excitement and nervousness, realizing that more efforts would be required in preparing for the big day. This year, the competition presents the finals virtually; students are spelling assigned words online. In other years, contestants would have flown to compete for the trophy in Toronto, Ontario.

Regardless of the transition to virtual platforms, Harbin is all in. The recipe for her achievement is a combination of discipline, eagerness, and family support. Aside from memorizing worksheets and working hard to prepare for the competition within just a few days, Harbin notes that her father pushed hard for her to learn English. Having moved to Canada just two years ago with his family, Singh explains that he often emphasizes English as a cultural requirement when moving to Canada. As advice to those who are new to the country, Singh suggests, “Push the limits. Just because you don’t know another language doesn’t mean you stop conversing in it. Learn new words. It will not happen in one day. It is a constant effort.” 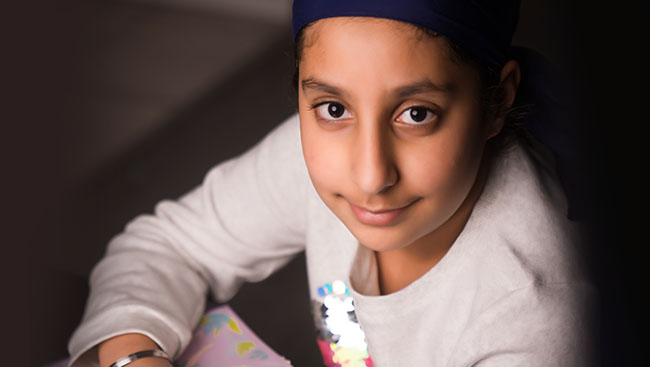 Reflecting on her memories from India, Harbin says she misses her friends the most. That said, her favorite part of having moved to Canada is that she now has even more friends, who have also helped her prepare for the competition! In fact, Harbin’s keen decision to partake in the Spelling Bee stemmed from seeing her classmates’ involvement. She saw the opportunity as one that could help enhance her vocabulary, which she continually polishes as an avid book reader. When she brought the conversation home, her parents were very encouraging. “We said to her that winning or losing is a different story, but you’ll learn new words,” recalls Singh.

Fittingly, the Spelling Bee of Canada boasts itself as an educational organization that encourages youth, parents, teachers and the community at large to participate in the education process. The SBOC defines parents’ role as important in keeping children interested in such initiatives, “Encourage playing spelling games –at home, in the car, or in transit.” Singh further outlines the significance of getting involved in your child’s education, pointing out that it should be the number one priority for every parent, “Parents should invest time into their kids’ education. I’m not going to solve the math question, but can still be someone who listens attentively, supports and motivates. Lending a ear is good!”

Without a doubt, the positive inspiration from home is paying off as Harbin continues to shine at school, also taking on other hobbies such as singing and chess. Corazon Pabo, Khalsa School’s Principal, describes that Harbin has truly excelled at the new language. Competitions like the Spelling Bee of Canada will only hone her academic capabilities to an even greater extent. Learning to spell leads to improvement in writing skillsets, vocabulary and the ability to think, not just memorize, as stated by Julie Spence, past President and pioneer of the SBOC.

As Harbin continues to make the community proud with her endeavors, she is a role-model to all. Taking on a widely recognized and renowned competition head-first with a smile, she is sure to be a busy bee as various milestones await her future journey. Her self-confidence is truly the wow factor here, as she simply spells out her winning mindset behind it all, “Just break the words into syllables and sound it out.”