The Power of Women: Inspiring stories of eight South Asian women in BC

Highlighting inspiring stories of eight South Asian women in BC.

The strength of a woman is invincible; her courage has no bounds and her resilience is limitless. Infact, women’s rights activist Nellie McClung once said: “Never underestimate the power of a woman.” For most of us, women have played an integral role at every phase in our lives – be it our grandmothers, mothers, sisters, wives or female peers – they have influenced our thoughts, continuously supported our dreams, and given us a hand when we were unable to rise.

Today, women are at the forefront of change. They are ruling nations; they are the key decision-makers; they have taken charge and are creating their own roadmap for success. As we celebrate International’s Women’s Day in March, DARPAN honours these empowering women – we respect their toughness, admire their perseverance and applaud them as they take centre-stage in their chosen paths.

In British Columbia, there are so many remarkable South Asian women who are leaders in their respective fields. Be it in politics, health, social work, business, or broadcasting – their contribution has been crucial for the growth and development of the province and BC’s South Asian community. These brilliant women have strived to reach their goals; they have shattered the glass ceiling to turn their dreams into reality. They have not let anyone hold them back – and that is our message for young South Asian women and girls who have big dreams. Don’t let anything or anyone hold you back!

Meet BC’s eight South Asian female role models as they share their thoughts, aspirations and advice with DARPAN. They are superwomen in their own right and a wonderful example of female power. 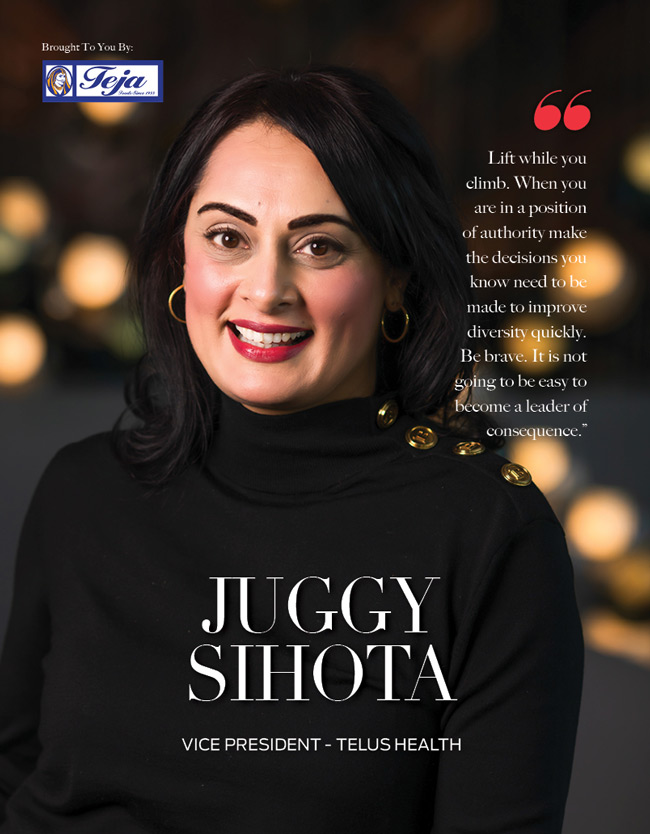 Juggy Sihota leads the national strategy, execution and operation of the Consumer Health business for TELUS. She brings products to market that address many of the pressing health needs of Canadians. TELUS aims at empowering Canadians to take control of their health and the health of their loved ones with the right information, tools, and support they need to live healthier and happier lives. .... CLICK TO READ HER STORY 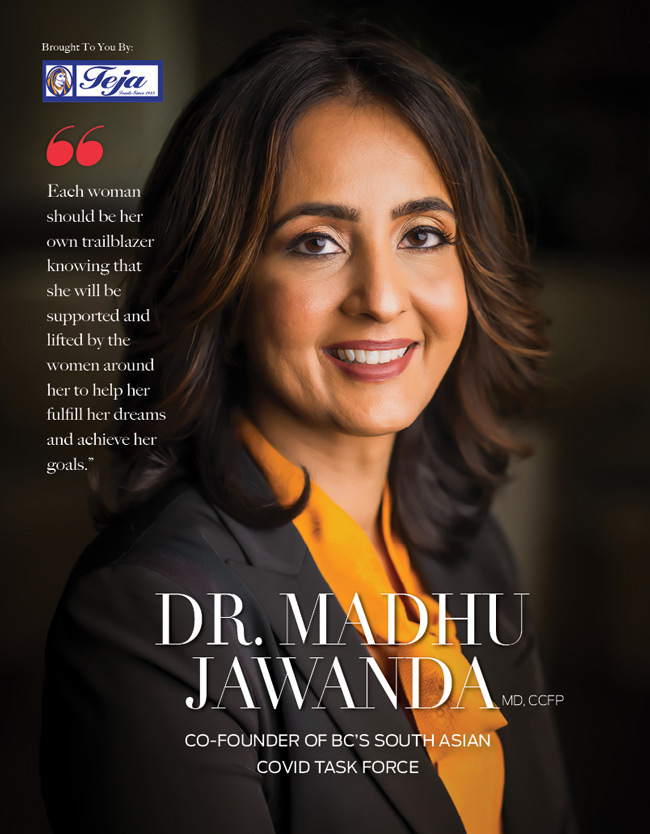 A family physician for over 20 years in Surrey. In my practice I aim to empower my patients, especially women, to live their best lives. I am born and raised in Edmonton, Alberta and I graduated from the University of Alberta Medical School.I have been in the lower mainland for over 20 years. My inspiration was my grandmother Dr Ajmer Kaur, Gold Medalist at Lady Hardinge Medical College,1932.  I am also a Co-founder of the BC South Asian Covid Task Force, a national, non political grassroots volunteer organization founded in November 2020. .... CLICK TO READ HER STORY 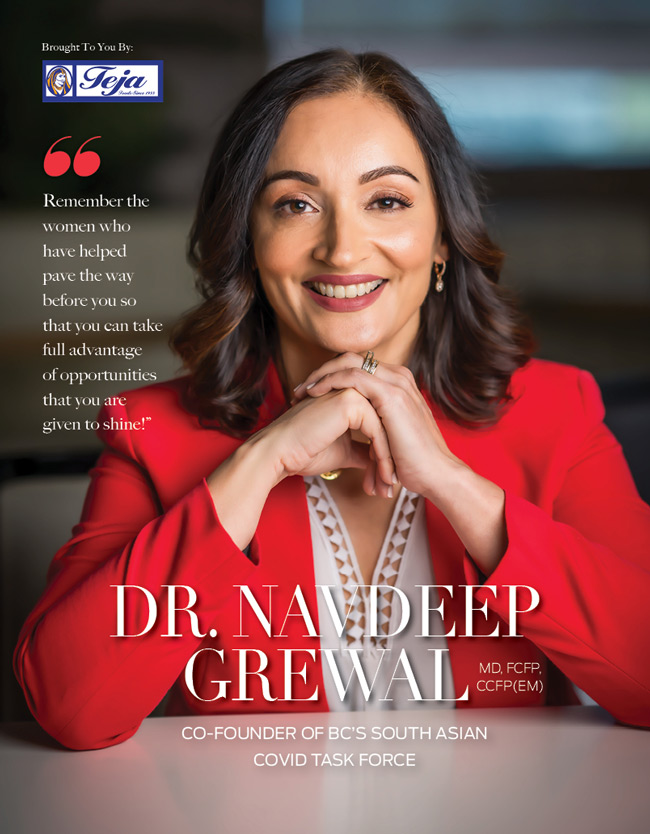 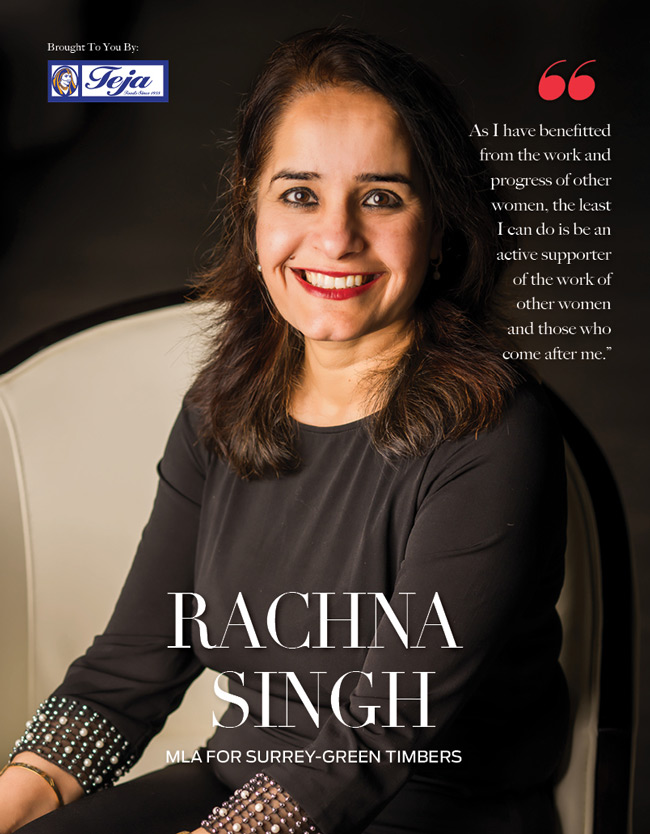 In addition to the honour of representing Surrey - Green Timbers as the MLA, Rachna is proud to serve as the BC’s Parliamentary Secretary for Anti-Racism Initiatives. She has been a longtime trade-unionist and an activist - her activism spans from fighting for Human Rights of people, gender equality, to bringing justice and dignity to the lives of the underprivileged, which she has continued in her capacity as an elected official. Prior to her election as an MLA in 2017, she served as the staff National Representative for Canadian Union of Public Employees, and has also worked as a psychologist and a counsellor. Most of all, though, she is the proud mother of two brave and intelligent children, and the wife of a journalist and activist. .... CLICK TO READ HER STORY 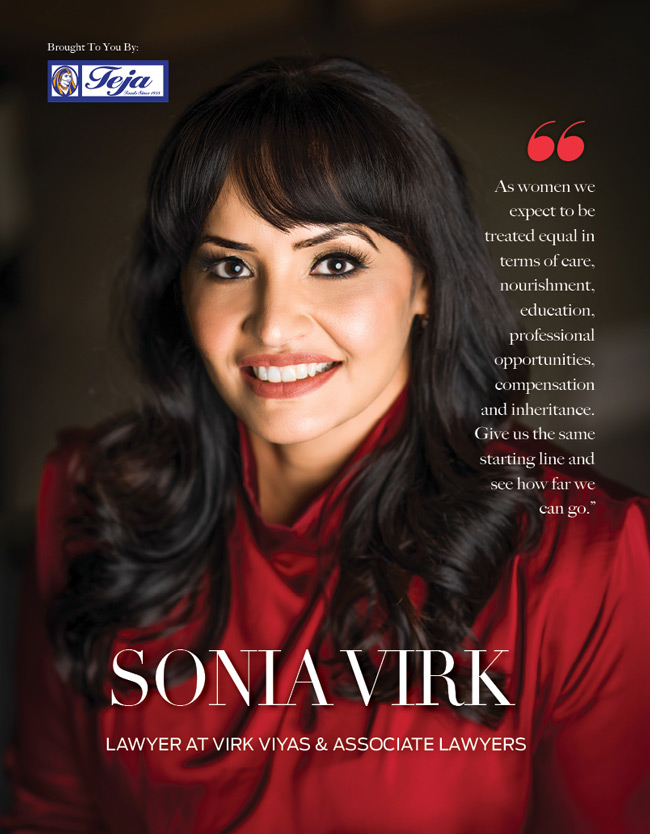 Sonia Virk is a lawyer and founder of Virk Viyas & Associate Lawyers. She is very active in the community and donates her time to various community related events. She currently sits on the board of directors for the Surrey Hospitals Foundation. .... CLICK TO READ HER STORY 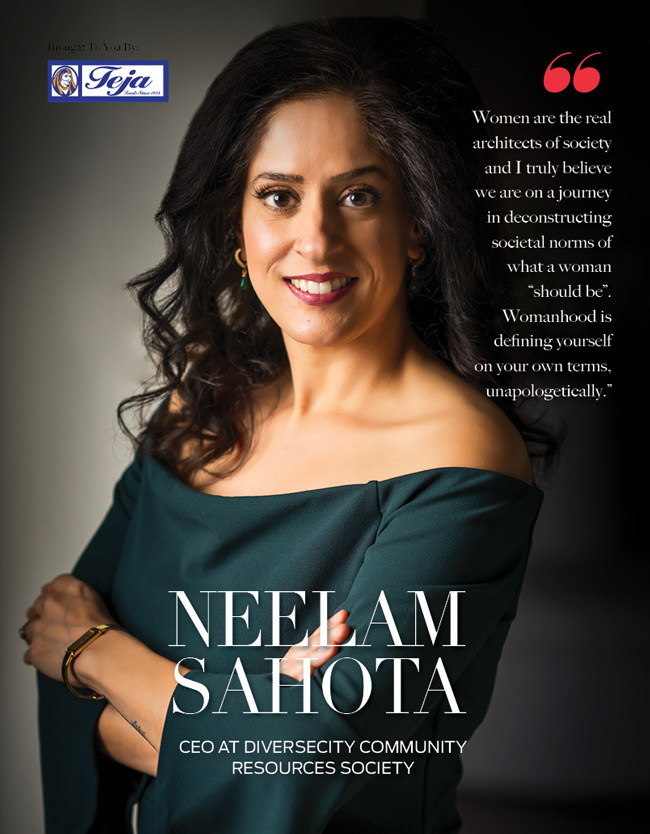 Neelam Sahota is a senior executive with more than 20 years of progressive experience in financial management, strategic planning, governance, risk management and operations management. She currently is the Chief Executive Officer of DIVERSEcity Community Resources Society, a values-based local registered charity that serves newcomers and underrepresented communities with equitable access to resources while reducing systemic barriers to participation. Neelam brings extensive experience to her role that has spanned the corporate sector, provincial government, entrepreneurship and non-profit industries. Taking a disciplined approach to developing effective business strategies to maximize community impact has been the cornerstone of her career. Neelam is a nominated Fellow of the Chartered Professional Accountants of British Columbia (FCPA, FCGA) where she has also recently obtained her Certificate in Executive Leadership. .... CLICK TO READ HER STORY 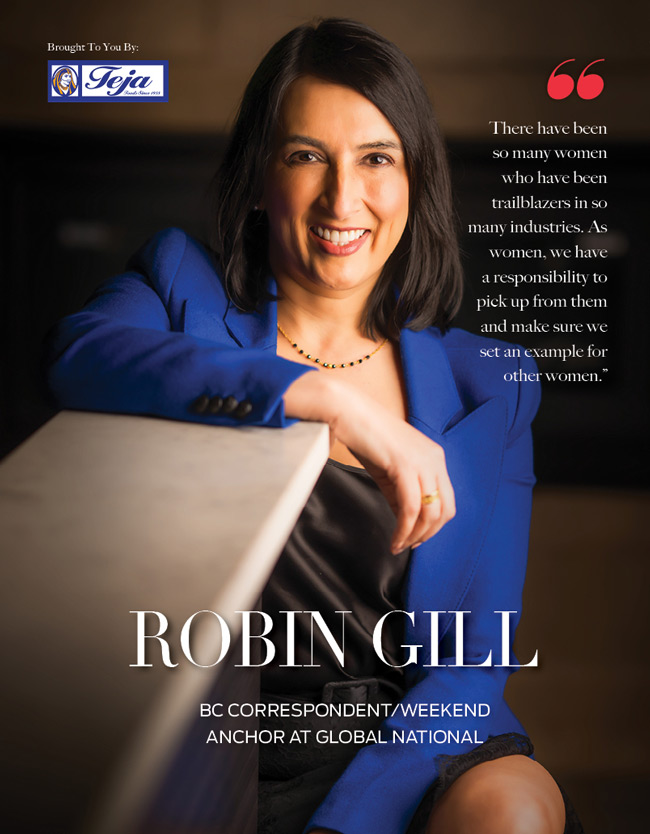 Robin Gill is Global National’s weekend anchor and British Columbia correspondent. Since arriving at Vancouver’s national newsroom in December 2008, Gill has reported on some of the biggest news stories across Canada and around the world, including the high-profile inquiry into the death of Polish immigrant Robert Dziekanski at the Vancouver International Airport, the United Nations meeting in Geneva at which world leaders discussed how to handle former Libyan leader Moammar Gadhafi and the aftermath of the devastating earthquake and tsunami that struck Japan in March 2011. .... CLICK TO READ HER STORY 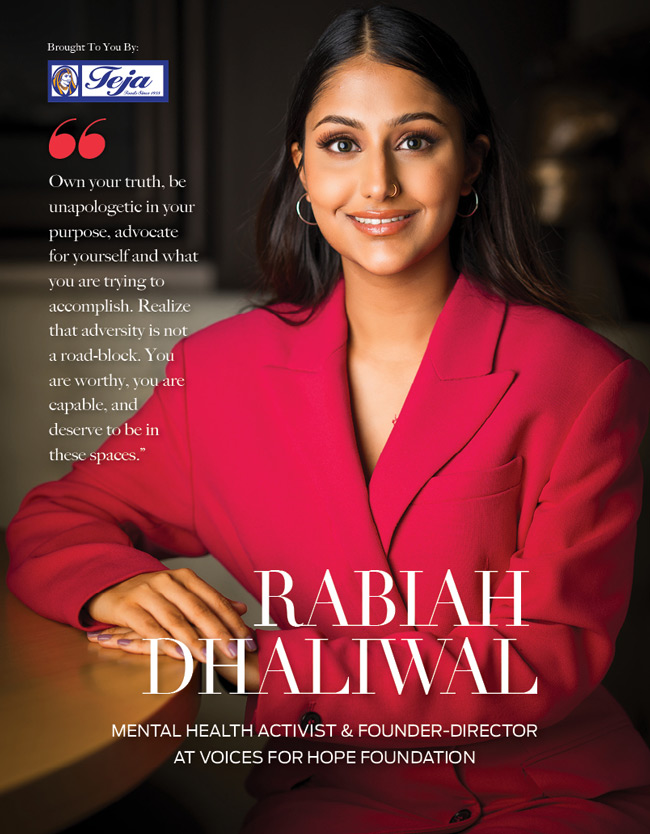 A mental health activist, community leader, and pageant queen (Miss British Columbia 2019), and proud Punjabi-Sikh neurodivergent woman with a disability ; Rabiah Dhaliwal is the Founder andDirector of the Voices For Hope Foundation, a non-profit organization which aims to challenge the stigma surrounding mental health through an intersectional framework by spear-heading educational initiatives such as workshops & campaigns, social justice think-pieces, policy & advocacy work, and providing those with mental health and addictions struggles, particularly those who identify as BIPOC (Black, Indigenous, and People of Colour) and/or LGBTQ+, a safe-space and platform to share their experiences in an effort to empower and equip communities with the resources and tools for healthy healing. .... CLICK TO READ HER STORY 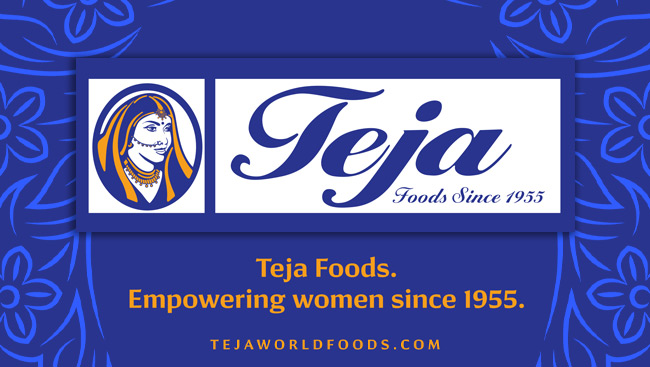 A Word From the Sponsor: Teja Foods

Teja Foods is proud to sponsor DARPAN Magazine’s spring issue as we celebrate the extraordinary South Asian women in our community. Teja Foods was part of this great initiative last year when DARPAN released its first Women’s Day issue in March 2020. Our support towards celebrating women and recognizing female achievements was greatly appreciated and applauded by BC residents.

The positive feedback was a testament to our work and service in the community. When the opportunity to sponsor this year’s Women’s Special issue came to us, we were thrilled to be on-board. 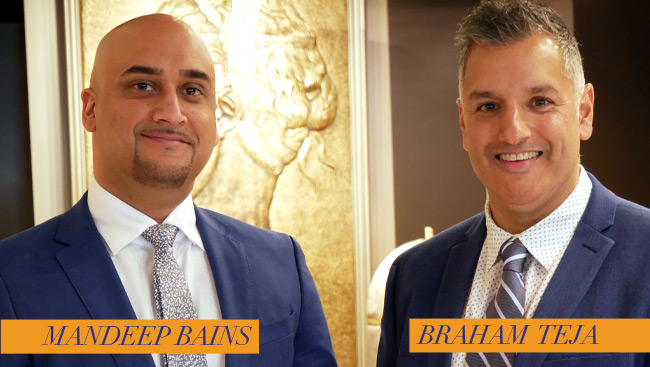 The tremendous achievements of women in our community symbolize the advancements towards greater gender equality and inclusion. At home, in our South Asian community, we continue to support the empowerment of women – our mothers, wives, sisters and daughters. Our proud South Asian heritage is rooted in the essence of the modern woman, as we commemorate her strength, courage and resilience.

Gurdial Singh Teja launched Teja Foods in 1955. He embarked on a journey of service to our South Asian Community during a time when high-quality South Asian products were not readily accessible. The foundation of our company was built to overcome these barriers in the Canadian market, allowing our community to embrace our cultural heritage and traditions.

Our beloved historic brand, the portrait of an Indian woman, is recognized across Canada as a symbol of our strong culture and commitment to excellence. We chose the portrait of an Indian woman who exudes empowerment but also celebrates tradition as a source of strength and pride. Braham Teja and Mandeep Bains are currently leading our company into the next generation while continuing to recognize the importance of heritage, culture and history.

Teja Foods is committed to supporting the community and celebrating the empowerment of women and girls as they become leaders in economic, social and political life. As we applaud the extraordinary women who are leading the transformation of our community, together we also celebrate the inspirational women who empower, inspire and advocate in our daily lives. From our household to yours, The Teja Foods Family