Major Bollywood films open during Diwali every year, but seldom embody the spirit of the festival of lights.

Diwali has long been established as a prime date to open tentpole Bollywood movies. Most times, these films share similar characteristics: Light as a feather action-comedies designed to pack the theatres with families, with one superstar or two thrown in for good measure.

These features rarely take place during the festival of lights or refer to it. Take this year’s big ticket item, Housefull 4, set to open October 25. Once again, the franchise uses reincarnation and lingering curses as romcom devices: Three couples forced to part in 1419 reunite 600 years later, but are set to marry the wrong person. Not very Diwali. 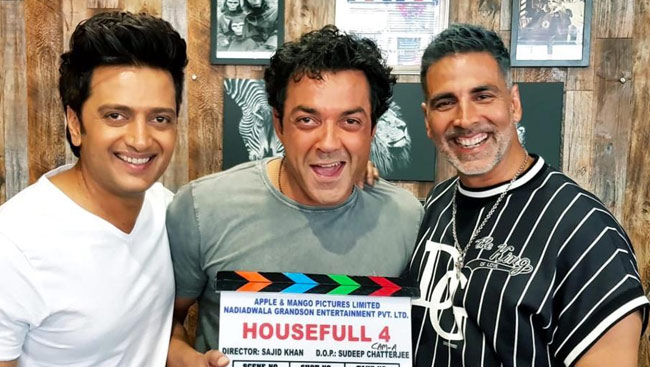 Perhaps more interesting than the plot is the drama behind the camera. Sajid Khan, director of the first three episodes is not coming back following numerous harassment charges. Franchise mainstay Jacqueline Fernandez also departed to star in the remake of the Ryan Gosling movie Drive, out on Netflix just a week after Housefull 4.

Other films that opened during Diwali in the last five years haven’t strayed as far. Here is a look at recent titles that hit theatres during the holiday. Most of them are available to stream:

Last year’s biggest Diwali release, Thugs of Hindostan was a massive US$32 million production with two huge names headlining the film, Aamir Khan and Amitabh Bachchan. The film follows a band of sea-based bandits lead by Azaad (Bachchan) as they battle the East India Company early in the 19th century. The movie made its money back, if barely, mostly thanks to China and North America. Thugs of Hindostan was savaged by critics, targeting a script that wasn’t at the same level as the production values.

Diwali or not? Not really. One could argue the transformation of Aamir Khan’s character from hired gun for the East India Company to Azaad’s ally represents the triumph of knowledge over ignorance, but it’s a bit of a stretch. Available on Amazon Prime.

The 2017 smash hit made twice its budget during Diwali week alone and ended its theatrical run grossing US$154 million, 50 times over the original investment. Quite a feat for a movie without star power (Aamir Khan pops up, but in a supporting role) or special effects. The plot is simple, yet timely: Insia, a teenager in a household where domestic abuse is a regular occurrence becomes an overnight sensation when she uploads a video of herself singing while wearing a niqab. Insia attempts to leverage her success into a way out for her and her mom from the clutches of her violent father.

Diwali or not? Absolutely. While it doesn’t refer the holiday directly, the film is the very definition of the victory of light over darkness. Available on Netflix.

Slightly more adult-oriented than your average Diwali fare, Ae Dil Hai Mushkil tells the story of star-crossed lovers Alizeh (Anushka Sharma) and Ayaan (Ranbir Kapoor). He is into her, but Alizeh is still in love with her ex-boyfriend. Scorned, Ayaan embarks in a relationship with Saba (Aishwarya Rai Bachchan), but mostly to make Alizeh jealous. It’s supposed to be a romantic comedy, but on a second view, you realize Ayaan is all kinds of awful: He spends most of the movie trying to manipulate Alizeh into falling for him, including telling her he loves her at her wedding and pushing her into a relationship after learning she has stage IV cancer, not to mention using Aishwarya Rai for leverage.

Diwali or not? Very little, but still watchable thanks to extended cameos by Shah Rukh Khan and Fawad Khan, plus the increasingly rare Aishwarya starring role. Available on Amazon Prime.

Very standard Diwali fare, Prem Ratan Dhan Payo goes for every conceivable genre: Action, romance, intrigue and comedy, all peppered with massive musical numbers. Loosely based on “The Prisoner of Zenda”, the film revolves around Vijay (Salman King), the crown prince of Pritampur. He’s the living example that money doesn’t buy happiness: His half-sisters want his fortune, his half-brother wants him dead and he is engaged to a woman he doesn’t love. The answer to all his problems is Prem (Khan again), a doppelganger who takes his place when one of the assassination attempts comes close to succeed.

Diwali or not? The film is an embarrassment of riches and the music has a traditional feel to it. Also, it’s hardly a spoiler to say that good defeats evil. Pure Diwali goodness. Available on Amazon Prime.