New York-based cellist Raman Ramakrishnan started cello lessons at the age of seven. “I always focused on the cello, perhaps because it was often the largest instrument in the group,” says the talented musician - currently a member of the Horszowski Trio with violinist Jesse Mills and pianist Rieko Aizawa.

Horszowski Trio was formed in 2011. The trio has performed across the United States, India, Japan, and in Hong Kong, and records for Bridge Records. Explaining the significance of the group’s name, Ramakrishnan says, “We named ourselves after the Polish pianist Mieczysław Horszowski, who was Rieko’s teacher at the Curtis Institute of Music. Horszowski, who died in 1993, was a musician’s musician. His performances were extraordinarily beautiful and heartfelt. In addition, he was a kind and humble man, and a generous and devoted teacher. We are inspired by him, and hope that our trio can live up to his name.”

As a former founding member of the Daedalus Quartet, Ramakrishnan won the grand prize at the 2001 Banff International String Quartet Competition (BISQC). With the quartet, he has performed coast-to-coast in the United States and Canada, in Japan, Hong Kong, and Panama, and across Europe. “We were lucky enough to win the BISQC, in our first year of existence, and that effectively launched our career,” says the cellist whoplays a Neapolitan cello made by Vincenzo Jorio in 1837.

He has given solo recitals in New York, Boston, Seattle, and Washington, D.C., and has performed chamber music at Caramoor, at Bargemusic, with the Chicago Chamber Musicians, and at the Aspen, Bard, Charlottesville, Four Seasons, Kingston, Lincolnshire (UK), Marlboro, Mehli Mehta (India), Oklahoma Mozart, and Vail Music Festivals. As a guest member of Yo-Yo Ma’s Silk Road Ensemble, he has performed in New Delhi and Agra, India, and in Cairo, Egypt.

That was the first time Ramakrishnan performed in India. After that, he has performed several times in Mumbai as part of Sangat, a chamber music festival held every December. In 2013, the Horszowski Trio performed in Bangalore and Mumbai. “One of the things I like most about India is its ability to take whatever you throw at it. India, which itself is a collection of different cultures, is constantly absorbing Europe, the Far East, Africa, and America, mixing them up, and transforming them into something uniquely Indian,” he shares.

He loves the vibrancy and colour of India. “It always takes me a few days to get used to the sensory overload. I like drifting around the streets of Mumbai - I never know what will be around the next corner.” However, he prefers the countryside. “Cities are similar the world over, but the countryside is where cultures tend to distinguish themselves. I could sit and listen for hours to the birds in India’s countryside.”

Ramakrishnan is an artist member of the Boston Chamber Music Society, and is on the faculties of Columbia University and the Bard College Conservatory of Music. “I feel lucky that I have been able to make a career out of something that really excited me as a child. Playing chamber music certainly is not the most lucrative thing to do, but it has its own intangible rewards: the joy of spontaneous communication between players, and the satisfaction of being able to transport an audience to a different place, at least for a little while,” he sums up. 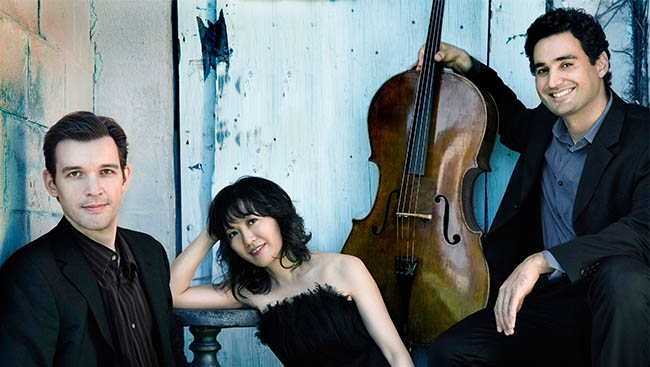 What inspires you to play the cello or perform?

I strive to be in the zone where I am at one with the music. This is a mental space where I am just riding the wave of the music, and my body is, without cerebral instruction, a perfect servant to the music. When this happens, there are no blocks ­- I can communicate freely with my colleagues on stage, and can effortlessly respond to them. And when we soar together, the piece comes alive and the audience (if we’re lucky) feels it, too. That joy of communication, and of flight, is what inspires me, and takes me to the next concert.

What are your future plans?

My future plans mostly involve my trio. We are embarking on some new recording projects with Bridge Records, and are contemplating recording, in the next year or two, the complete piano trios of Robert Schumann. His music - turbulent and serene, dark and light, always strangely beautiful - seems to fit our temperament as a trio. The next season takes us to concerts all over the country - to California, Minnesota, North Carolina, Washington, D.C., Florida, Connecticut, and New Hampshire, to name a few. In addition, I will continue to teach at Bard College.

What advice would you give youngsters or those who wish to follow your path?

It is important for us all (regardless of our interests) to make no compromises about our career path, at least when we are young - we get no second chance at life. If things don’t work out, then we need to re-evaluate, but we should always first try to follow our hearts. For those interested in chamber music, it’s important to surround yourselves with like-minded people, and to keep track of the people with whom you have a special musical connection. Going to summer chamber music festivals is a great way to do this.

Indians around the world have made significant contributions to their immigrated countries, what do you think of this accomplishment?

I confess that I feel no nationalist pride when Indians do well in their adopted countries, perhaps because I was born and raised in America. But I know from watching my father that immigrants can have all sorts of difficulties breaking into another culture. So whenever any immigrant is able to rise above a society’s distrust of the “other” and make valuable contributions to his adopted homeland, I think it speaks of his courage and strength of character. We can all hope to live, eventually, in a world without borders.

The director of the brilliant film ‘Punching at the Sun’, Chopra uses his ...

About a year after graduating from college with an English degree, Rohit Bhargava began waiting t...

Set in a remote village in India, Kamala Nair's The Girl in the Garden tells the story of a young woman who revisits the events of one fateful childhood summer in her memories – the time when her mother whisked her away from her home to their ancestral home in India. It is there she discovers a spellbinding garden, one that harbours a terrifying secret.

The new Dean of the University of California, Berkeley’s School of Law is none other than Sujit Choudhry, a prolific scholar and an international expert on comparative constitutional development. He has to his credit more than seventy articles, reports and book chapters.