Petrina D’Souza, 13 Sep, 2017
Though it has been just a few weeks that NDP Party leader John Horgan has taken on the new role as BC Premier, he has already started working on implementing his campaign promises. The Premier recently announced that effective September 1 the government will eliminate the tolls on the Port Mann and Golden Ears bridges – making good on a campaign promise he made during the May 2017 election.
This first step has raised people’s expectations on Premier Horgan as he step-by step builds a province that works for the betterment of its people.
In an exclusive interview, he shares with DARPAN his strategies to deal with the crucial issues affecting the province, and the major changes BC residents can expect in the coming years.
Excerpts from the interview:
Q: You created a gender-balanced BC Cabinet. How has this decision encouraged gender equality in the country?
I believe our province needs a government that not only works for everyone, but also reflects the values and diversity of our province. And for the first time in history, we now have an equal number of women and men in [BC] cabinet. Equity and equal rights are at the core of my values, and having a gender balanced cabinet is just a first step in helping encourage gender equity in B.C. and Canada. 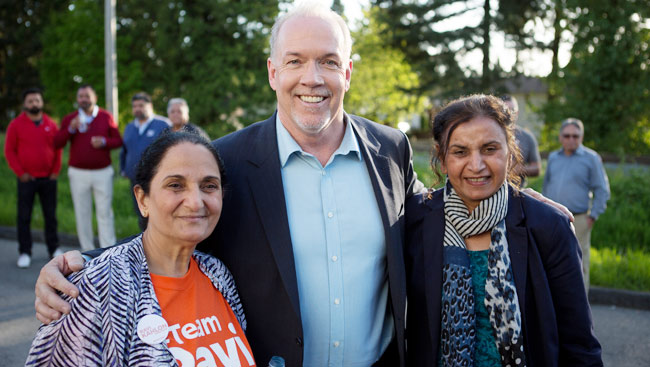 Q: How was your recent meeting with PM Trudeau? What were the crucial BC issues discussed?
The Prime Minister and I have met several times in the past weeks and we’ve developed a positive and productive relationship. We’ve talked about some of the urgent issues facing people in B.C. – from childcare to affordable housing to public infrastructure to the opioid crisis.
The federal government quickly stepped up to help with the wildfire crisis in B.C. and Prime Minister Trudeau and I toured some of the hardest hit areas of the interior together.
We’ve also spoken about the softwood lumber dispute, which is so crucial to our province. B.C. is ready to do its part. I made it clear to the Prime Minister that I will fight for the thousands of British Columbians whose jobs depend on softwood and on trade.
Q: The B.C. government announced the increase of the minimum wage from $10.85 to $11.35 per hour in September and to $15 by 2021. What obstacles do you see yourself facing to meet the four-year deadline?
British Columbia’s lowest-paid workers need a raise. Moving, over time, to a $15 an hour minimum wage is long overdue and will make life affordable for more people. The action we’re taking will make life better for working parents, seniors, new Canadians, student and more. These are people struggling to get by.
We’ve listened to business owners, who have told us gradual, predictable increases are the way to go. And they recognize that the move to a $15 minimum wage is good for staff retention, and good for the B.C. economy. I know some in the business community still have questions, which is why we will be bringing in a Fair Wages Commission to get B.C. to $15 an hour along a planned, responsible path.
Q: Do you have any specific plans to reduce unemployment or create more jobs?
For 16 years, the BC Liberals made life harder and less affordable. British Columbians were working harder but falling behind while costs went up and wages were stagnant. But because the wealthiest British Columbians were doing just fine, the BC Liberals said that we had a strong economy. That’s not what I believe.
I believe a strong economy is when everyone is doing better. Where life gets a little easier each month, not harder. And I’m going to work hard to make sure our economy works for everyone.
We’ll follow through on our plans to create 96,000 construction jobs while building hospitals, housing, schools, roads and public transit. We’re going to work to build a sustainable economy and protect our environment while creating jobs in the tech, energy, manufacturing and tourism sectors.
We’re going to help small businesses succeed and grow by reducing the small business tax rate and creating a small business task force. And we’re going to fight to bring back and protect the 30,000 good, family-supporting jobs in the forestry industry lost under the BC Liberals. 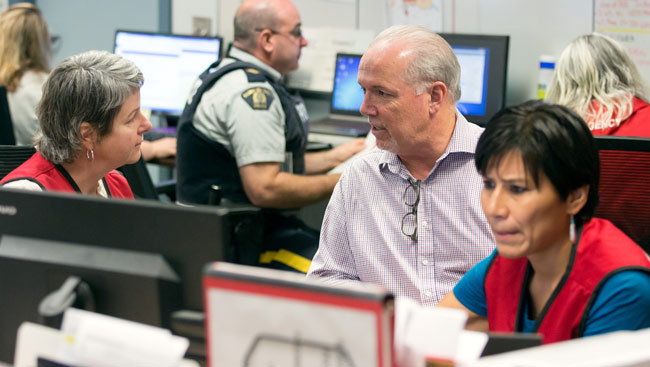 Q: Affordable housing is still a prominent issue, especially in Vancouver and surrounding regions. What measures will the BC government implement to curb this issue?
B.C. is a great place to live, work and raise a family, but so many people are struggling with housing costs that were ignored for so long that they became a crisis under the BC Liberals.
There are some great ideas out there about how to fix this, but there has been a missing piece at the provincial level. I’ve tasked the new minister of housing to take that leadership step and follow through on our promises to make housing more affordable for people.
The new BC NDP government will build 114,000 units of affordable market rental, non-profit, co-op, supported social housing and owner-purchase housing. We’ll amend the Residential Tenancy Act to provide stronger protections for renters, and provide additional resources to the Residential Tenancy Branch.
We’re going to give renters a break with an annual renter’s rebate of $400 dollars. We’re going to address speculation, tax fraud and money laundering in the housing market. And we will develop a homelessness action plan to reduce the homeless population through permanent housing and services.
Q: What changes by the NDP government do you believe will have the biggest impact on the future of the province?
We are going to work to make life more affordable for people here again. By eliminating unfair tolls and fees, by bringing in affordable childcare, by addressing the cost of housing – we’re going to make sure people have more money in their pockets and more opportunities in front of them. I think this is going to make a huge difference for families in B.C. 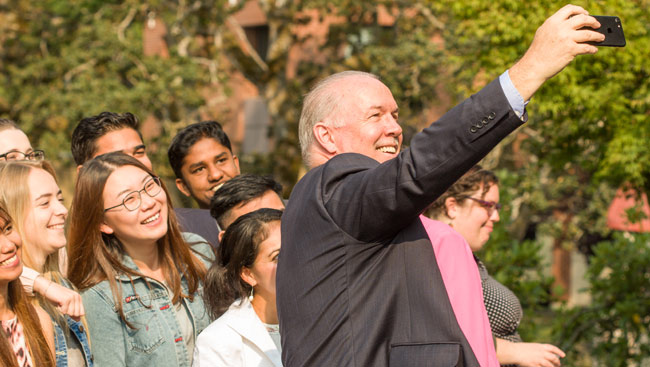 Q: What is your message to the residents of BC? What can they expect from your government in the coming years?
This is your government. We are ready to work for everyone in B.C. We are going to take real action to make your life more affordable. We’re going to work hard to improve the services you count on.
We’ll deliver quality health care where you need it, when you need it, and we’ll fix our education system, investing in student success from kindergarten to graduate school. And finally, we’re going to build a sustainable economy, with good jobs, that works for everyone.
Prev Next

Multi-gifted artist, singer, composer and Sufi poet, Satinder Sartaaj, has added yet another feather to his cap with his acting debut in the Hollywood film, The Black Prince.