Canadian actor Vinay Virmani is building a career on his own terms. Instead of going from bit parts to bigger roles, Virmani has become a creative force with a hand in producing and writing in the films he stars in (Breakaway, Dr. Cabbie).  Graduated from York University, Vinay received further training at the Lee Strasberg Institute. Besides having a driven personality, the actor has gone above and beyond to bring the immigrant experience to the big screen.

What did you learn from making Dr. Cabbie that you didn’t know before?

Dr. Cabbie was a big step for me because it was the first time I was producing a movie, besides acting and writing. I didn’t realize how crucial the role was or was aware of the amount of responsibility that comes with it. Being a producer is not a 9 to 5 job, but 24/7. You live, eat and breathe the film, from pre-production to packaging to distribution.

Considering both Breakaway and Dr. Cabbie were conceived by you, would it be accurate to say you’re forging your own career?

I’m open to read other people’s scripts. It just happened that these two stories connected with distributors, financers, studios and talent. I always have three or four ideas on the go and the movie business is such that you never know which one is going to be greenlit. In both Breakaway and Dr. Cabbie there was something endearing, heartwarming about them that attracted the right people.

Being also the writer of your movies, how attached are you to your scripts?

You can’t get too attached. You have to realize when you assemble a team, you are bringing in people that share your vision, but also elevate the project on their own. If my director chooses to shoot something differently, he is doing it with the best intentions. The director is the captain of the ship and at some point you have to let your baby go to him. There are so many lines in Dr. Cabbie that come from the actors thinking as their characters.
You and Kunal Nayyar (The Big Bang Theory) have an immediate, easygoing chemistry. Is there a possibility you’ll work together again?
I’ll say this. Kunal and I hit it off like brothers instantly. It’s great to meet a fellow actor so encouraging. He wants you to do your best, he always has your back. There is no insecurity. Nothing would make us happier than making another film together. 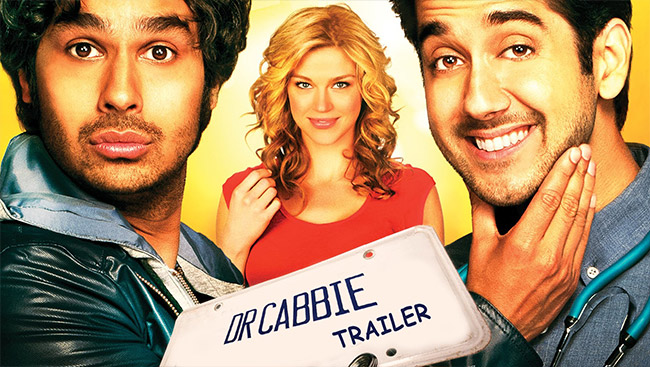 There are so many Indian immigrant experiences that go untold. Do you feel you have an ear for these kinds of stories?

In Canada we are all immigrants, so we are surrounded by so many different stories. Like
professionals that come to this country and are not able to do what they are meant to, lawyers,
doctors, engineers. I have always been fascinated by their struggle and the cross-cultural conflict. We really tried to depict the immigrant pledge with respect and integrity and possibly leave them with hope. Based on the feedback I’ve received, we have been successful. I have sneaked into a lot of
theatres and I’ve seen South Asians, Middle Easterns, Caucasians, and they are all enjoying it.

Do you read your reviews?

I do. I like to read my reviews because they provide perspective. I learn from them. We entered this business to be recognized and criticized. But the end of the day my obligation is to the public and, for the most part, audiences are very satisfied.

Do you follow the independent movement in Indian cinema?

I’m a big supporter of the new wave. This is the best time for the Indian film industry. You have so many niches, so many genres, and big commercial actors that want to try new things. I’m a big fan of people like Anurag Kashyap and Bejoy Nambiar, with whom I made a movie in India called David.

What characteristics do you look for in a project to pursue it?

As an actor, I’m looking for a challenge, something I haven’t done and I can make my own. As a producer, I want to make movies that are funny –I’m a sucker for comedies, but I’m open to other genres.

What are you working on next?

I’m doing an epic, historical film based on the Komagata Maru incident of 1914. It’s a very tragic story that’s a big part of Canadian and Indian history. I’ve been researching for the last seven years, and now that is the 100-year anniversary I believe is the right time to get this project off the ground. It requires a lot of resources and talent, but it’s such an important immigrant story, I believe my generation needs to know about those 376 passengers and what they went through when they arrived to the BC shores.

What is the biggest misconception about you?

People may think creating or acting in these projects has been easy. They don’t realize that to make a movie and do it well it takes years of sacrifice and sleepless nights. Anybody in the movie business can tell you the process is full of tears, sweat and hard work. You compromise your personal life by working 16 hours a day on set, then in the lab and later promoting the movie to get people to buy into your vision. Having said that, it’s my dream and that’s what I’ll continue doing.

Ajay V. Bhatt, is known for his contributions to the world of technology in the form of his co-invention, the USB (Universal Serial Bus).