In the summer of 2016, Khandelwal represented Canadian youth at the G20 Youth Summit in China as part of a five-member delegation with the Young Diplomats of Canada.

Very few youngsters can picture their future. In today’s world, young adults are busy juggling academic and personal life, sharing their views on social media, and wondering what career option to choose. Yet there are a few who have already carved a path for themselves and have a 10-year goal in mind. One among these few is the smart and skillful Umang Khandelwal, a 21-year-old 2L law student at the University of Cambridge, with a Bachelor degree in International Relations from the University of British Columbia (UBC).
This young lady has been playing a key role in highlighting the issues Canadian youth face in the country and has been working towards finding solutions to these issues. In the summer of 2016, Khandelwal represented Canadian youth at the G20 Youth Summit in China as part of a five-member delegation with the Young Diplomats of Canada. Describing the Summit, she says, “The Y20 is an incredible forum for young people from all over the world to discuss and negotiate diverse global issues to achieve fair, creative and representative solutions.” 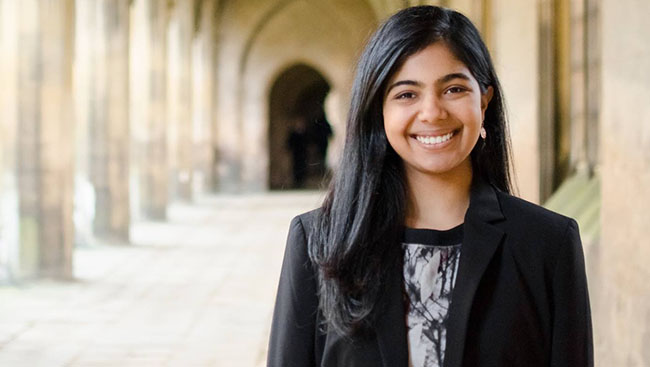 The highlight of this experience was the opportunity to have a Google hangout with Prime Minister Justin Trudeau following the conference to discuss the policy recommendations and to also advocate for the policies to be reflected in the G20 communiqué. “Having the Prime Minister as close as on the screen of my laptop, having him intently listen to my ideas and to my amazement, having him remember our previous meeting will be a memory that I will never forget,” expresses Khandelwal, who first met the Prime Minister in March 2015 at UBC, where she had the opportunity to introduce Trudeau before he addressed a crowd of 1,500 students.
For her, this conversation was an empowering experience not only for the team, but for young people across the world who can take ownership of the future and actively engage in decision-making processes.
Chatting with the Prime Minister might be one of Khandelwal’s top moments of 2016, but it isn’t the only one. Another moment that she cherishes was meeting Prince William, Duke of Cambridge and Katherine, the Duchess of Cambridge at the Prime Minister’s reception for young leaders during the Royal Visit to Canada in September last year. “I spoke to the Duke and Duchess about my work encouraging world leaders at the G20 to act to eliminate poverty,” adds Khandelwal, who has also worked at the House of Lords in the United Kingdom, focusing on issues such as prison reform for women and increasing the participation and representation of women in politics, while taking courses at the London School of Economics as a Hansard Scholar. 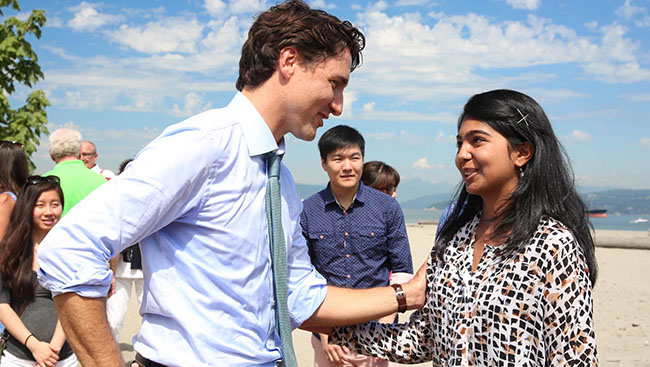 At Cambridge, the law student is an elected member of the university’s highest policy-making body, the University Council and serves as a Trustee of the university. She also has an interest in research, which she applies in her roles as the Senior Editor of the Cambridge Consulting Network and Director of Policy with The Wilberforce Society – the UK’s leading student-run think tank.
Meeting renowned world leaders and having an inspiring academic life at such a young age is definitely an accomplishment for Khandelwal. Before we conclude, I ask her to describe the year 2016. She delightfully calls it “a bundle of opportunities and challenges.”
For this year, Khandelwal plans on putting her best efforts towards academic excellence and supplement her learning with experiences in the private sector. “As 2016 brought unexpected experiences, I look forward to 2017 unravelling in all it has to offer,” sums up DARPAN’s 2016 Newsmaker. 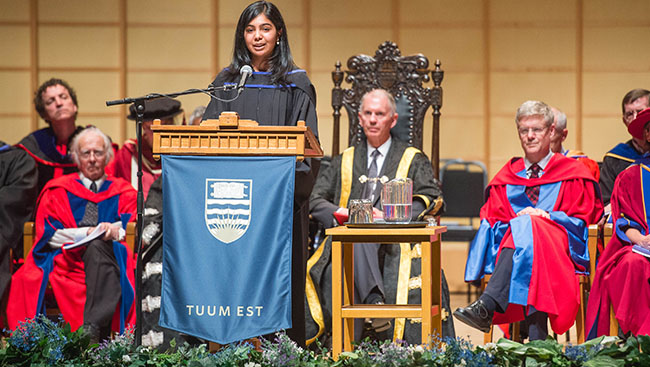 What inspires you to do better each day?
We all have the chance to leave the world a slightly better place than when we inherited it. The tremendous prospect to leave behind a legacy motivates me to try harder and be the best at what I do. I have realized the crucial importance of overall well-being to success. While I have a strong work ethic and actively seek out opportunities, I balance this with time with my family and friends. I am lucky to be surrounded by people who care for me and understand the stresses of an intensive degree. This allows me to stay happy and continue to make contributions in my work.
What’s your advice for those who wish to follow your path?
Create your own path. Find things that drive you to go the extra mile. Think big, be proactive and work collaboratively.
What does success mean to you?
Success for me is having the inner strength to define ‘success’ subjectively. This means relying on my own personal and professional goals, taking pride in my accomplishments and moving past making unhealthy comparisons. Success is living a meaningful life – commitment to personal growth while staying true to my values, having rewarding relationships, making a difference and striving to be my best.
Prev Next

Jugpreet's participation in Zee TV’s Sa Re Ga Ma Pa in 2016 put him in the limelight all over the world. His melodious voice captured the hearts of the judges and listeners alike and he became one of the top three contestants on the show.