For Prab Rai, June 21st began much like any other day for an 18-year old: he was about to sit down for breakfast with his family. “Suddenly, my cell phone rang and it was my agent on the other end. He told me that the Canucks was about to pick and that they were going to pick me. I watched my name come up on the draft board and my family began to go hysterical.” 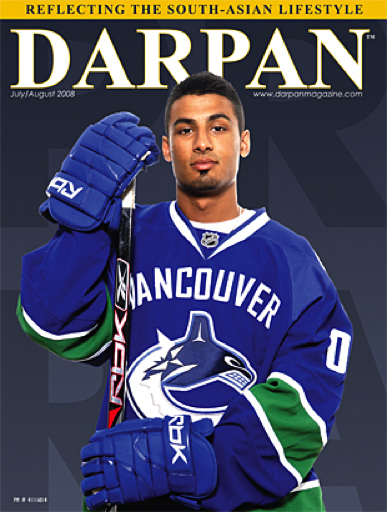 Since the moment when his name was posted as the Canucks’ draft pick going into the fifth round, the phones have been ringing nonstop at the Rai residence.

“People I haven’t been in touch with since Elementary school have been looking me up,” Prab quips.

Earlier in the season, many National Hockey League team had interviewed Prab, including the Detroit Red wings and the Vancouver Canucks.

“During the draft, anything can happen. Waiting out the process can be nerve-wracking.”

As the new kid in the Canucks’ “garage”, Prab is conscious of the cover boy syndrome.

“Some guys can skate and some guys can just fly. And Prab can fly.” -Ray Stonehouse Former owner of the Calgary Flames

Sitting in the Fleetwood Tim Horton’s on a sweltering July afternoon, Prab reflects on the burst of media attention and home-town fame. While media calls and interviews have become a part of his day, his priorities are clear. Being the cover boy in the 08 draft preview lasts only for a season.

“Getting drafted is getting your toe into the water,” he comments. It’s up to each player whether he can sink or swim.

Prab’s ice hockey history debut dates back to the age of six, when he played his first game with Surrey Minor Hockey Association.

“My older brother Jas got me started,” he grins. “He got me hooked on street hockey and the rest is history.”

Sports were never pushed in the Rai household even though his father (Harbhjan Singh Rai) was a top-ranked field hockey star in the early 80s winning gold at the Pan Am games and representing Canada in the 84 Olympics. Prab and his brother dabbled in a bit of everything: hockey, basketball, baseball and bhangra.

When Prab turned 13, hockey took centre stage in his life when joined the Notre Dame Hounds and moved from BC to Saskatchewan. Living on his own in a dorm meant more than adjusting to prairie winters and missing his mother’s home cooking. Leaving home meant leaving his South Asian community. Notre Dame was a no-man’s land for Indo Canadian hockey players.

“I grew up fast and learned life skills,”

He remembers although he is quick to point out that there was no racism at Notre Dame.
For Prab, making the transition from rec hockey to playing in the WHL was the biggest challenge.

“I was the short, skinny kid,” Prab recalls. “I had a lot of physical growing up to do.”

Developing solid practice habits and immunity to criticism were two strategies that helped him cope.

“Criticism can make you stronger or weaker,” Prab maintains. “It can make you improve as a player. The best you can do is outperform your critics’ expectations.”

Maturing as a player required more ice time during regular season games. However, making the jump from junior B to the Prince George Cougars meant waiting on the bench while the veteran players dominated.

For Prab, the trade to the Seattle Thunderbirds led to more ice time as well as an environment where he could grow defensively and offensively.

“Seattle was welcoming beyond my wildest dreams. And my coach Rob Sumner took risks in playing me at such a young age.”

Prab recalls his first game with the Thunderbirds.

A Day in the Life of an NHL Draft Pick:

Get up at dawn.
Train with his personal trainer, John Craighead, for two hours of strength training.
Train on the ice with his conditioning coach Tim Preston.

As part of his regimen, Prab avoids alcohol, and junk food.  His diet is continuously tweaked to allow him to maintain the ideal bodyfat ratio.

“It went into overtime, and the coach gave me a crack at the shoot out. Our game was hinging on it. Lucky for me, the puck went in and the rest was history.”

Training, playing and living in Seattle for the past two seasons provided a relaxed environment where he could skate under the radar, stay focused and continue his development.

“Seattle is not a hockey town like Vancouver,” Prab comments. “In Seattle, you need satellite TV to get NHL highlights.”

As an Indo Canadian on the ice, Prab is accustomed to the curiosity factor that surrounds him. In a sport dominated by provinces to the east of BC, Prab is used to standing out. Like Canadian figure skater Emmanuel Sandhu, Prab’s career will undoubtedly draw undue attention and scrutiny.

How does he feel about coming under the microscope? For Prab, the scoreboard is the ultimate critic. And scoreboards don’t lie.

The next chapter of Prab’s hockey career will be focused on whether or not he can make the cut in the Canucks’ fall training camp.

If Prab is not signed by the Canucks, he will return to the Seattle Thunderbirds for another season, continue to develop his game and help the Thunderbirds have a successful season in 2008-09.

As the Canucks reconfigure for the upcoming season, rumours swirl aboutthe strategy Mike Gillis will take. Prab remains tight-lipped other than to show support for Gillis and the Canucks.“Mike Gillis knows what he is doing,” Prab emphasizes. With fewer jewels in the crown, there is room for gems that are uncut. Prab is aware that he can make a difference even as an unknown rookie. Prab’s unflappable attitude and ability to stay focused is one of the characteristics that can only help the Canucks on and off the ice. Speed-wise, Prab has a reputation for stick-handling and skating skills that have born numerous comparisons to NHL legends. His nickname to date: the Chocolate Rocket.“Although I’m Canucks’ property for the next two years, whether I end up wearing the jersey comes down to how I prove myself when the pressure is on.”