A recognized South Asian artist in BC, Johal’s work is well-known in Vancouver’s art community. Her art is inspired by her South Asian heritage and also creates awareness on social issues such as injustice, gender inequality and cultural identity.

Art holds a lot of power; it is a connector, a conversation starter. Art evokes emotions and builds curiosity. Art presents a new side to a story; it influences thoughts and opinions. Art is therefore an effective tool to create social awareness, and this is aptly proven by Canadian visual artist, Sandeep Johal. A recognized South Asian artist in BC, Johal’s work is well-known in Vancouver’s art community. Her art is unique and refreshing; her style of colourful geometric forms and intricate black and white line work is aesthetically and conceptually inspired by her South Asian heritage. Johal’s art is not only visually appealing but also a subtle presentation of common social issues that are still existent in modern society.

WATCH EXCLUSIVE INTERVIEW - BEHIND THE SCENES OF COVERSHOOT

Johal’s artwork and murals have been highly revered in the art community. It therefore comes as a surprise that a career as a visual artist was not her first choice. Johal was born and raised in the Okanagan by Punjabi Sikh parents who immigrated to Canada in the early 70s. She always had a natural aptitude for art. “When I was a kid, my mom would buy me pads of paper to keep me busy. I filled them up with drawings that I wallpapered all over my bedroom,” recalls the visual creator, adding that CBC’s Mr. Dressup was a huge catalyst for her imagination and one of her most formative role models. However, not having any role models in the community to show her that a career in the arts was possible, Johal ended up earning a Biology degree followed by an Education degree. “But my heart wasn’t in it,” she discloses, “At 30 years old, I finally worked up the nerve to go to art school, graduated with honours, and won the design award. Almost a decade later, after having my son, I pursued my art career in earnest at the age of 41.” 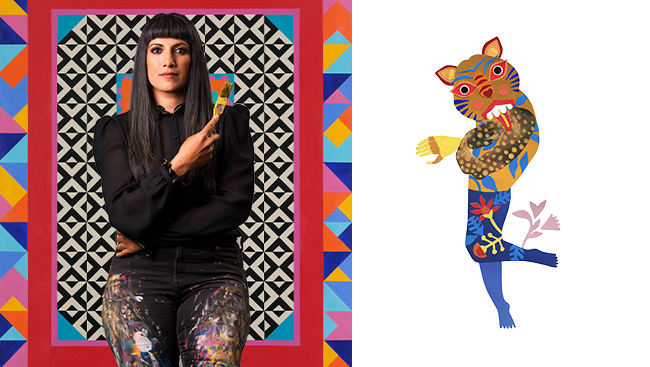 It was courage that pushed Johal to explore her passion and she is now enjoying the rewards of that courage. Her artistic journey is proof that pursuing one’s passion is not restricted to a set timeline and you can attain your goals with courage, honesty and hard work. “I had no idea when I left my job in 2016 that it would amount to anything. And now I’m a professional artist making a living from my art. It’s been a long time coming, a non-linear path filled with ups and downs, riddled with doubts and insecurities, but most importantly, a testament to my drive, work ethic, and passion,” says the South Asian artist. 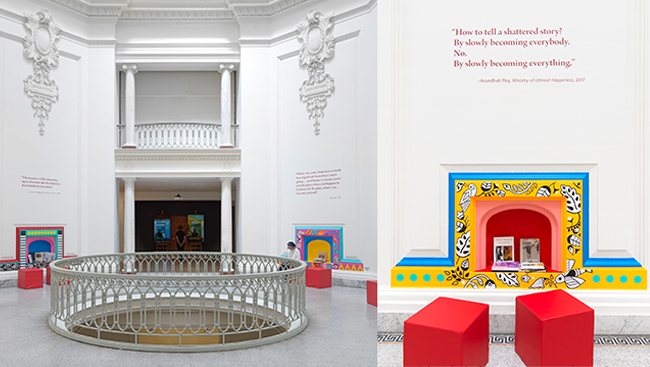 She describes her style as contemporary folk art with a diasporic twist. “I’m so inspired by Madhubani and Gond folk art, as well as folk art from other countries. It’s naïve, yet complex and filled with stories. I also use the term maximalist because I pack as much colour, pattern, and detail into my work as possible while still maintaining space for the eye to rest,” explains Johal, whose art is deeply influenced by her heritage and culture. “My town had a small South Asian population and very little cultural diversity. I rejected my culture to fit in which I regret. As an adult I’ve embraced my heritage. I no longer wish to hide my identity so it’s very important to me that people know my work is made by a South Asian hand. I’m influenced by the textiles and jewelry I grew up observing – a tiny mirror on a bright textured pillow, the clashing patterns of a salwar-kameez, the border of a sari, the shapes found in ornamental earrings and necklaces, and so on.” Drawing studies form the basis of Johal’s work. “I pull from those studies when I plan my murals, and draw from books by South Asian authors for my shows. I work fairly intuitively with a loose plan,” she says, describing her creative process. 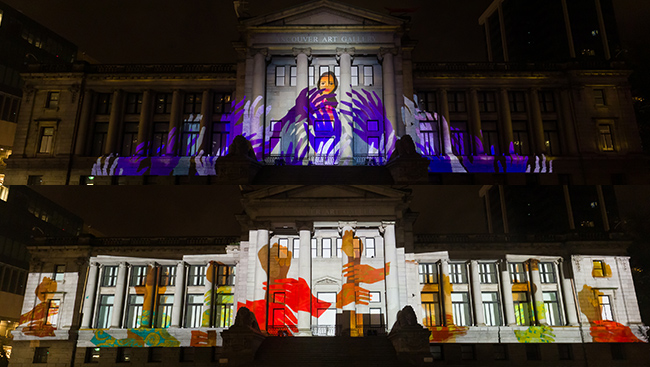 Johal uses art to create awareness on social issues that are close to her heart, issues related to cultural identity, gender equality and human rights. Her art practice is an expression of her social and cultural concerns, particularly gender justice. “I’ve always had a very strong sense of justice and fairness, especially when it comes to women. Growing up, I was extremely vocal about the inequality I witnessed between men and women in my home and in our community,” she shares. Her first series around gender justice, When Honour Kills (2006), questioned this notion of honour/izzat that is so strong that families are willing to kill their female relatives over it. Over a decade later, her first solo show, Rest In Power (2017), was dedicated to 12 women (half of them South Asian) who were murdered for simply being women. Her series, She Left Only To Come Back (2019) is an exploration of femininity, motherhood, inter-generational trauma and loss set against a backdrop of familial obligation and self-sacrifice. “Through my work, I share women’s stories and highlight the often violent injustices women face daily and in doing so, hope to elevate and empower women and challenge beliefs around women’s inherent value and worth,” points out the social artist. 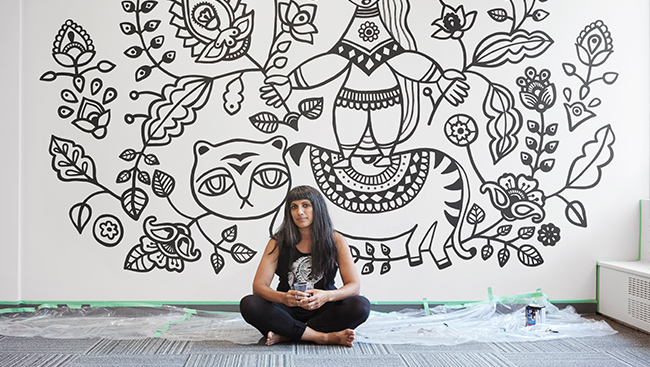 Johal has showcased her work at various art festivals and collaborated with esteemed art organizations over the years. She was invited to make a site-specific work using projection mapping technology for Façade Festival created by Burrard Arts Foundation in partnership with the Vancouver Art Gallery; commissioned to paint four murals inside the Vancouver Art Gallery in conjunction with Moving Still: Performative Photography In India; and collaborated with Vancouver Mural Festival on a special community mural project about the Komagatamaru which involved the denaming of a federal building. She recently completed her largest mural to date (50’ x 30’) for Nelson International Mural Festival. “I freehanded the entire mural, which was a challenge, and had to get over my fear of heights and my fear of operating a boom lift pretty quickly. This project was a reminder that we can break our self-imposed limits and achieve things we never dreamed possible if we believe in ourselves,” says the 2019 recipient of Darpan Magazine’s Artistic Visionary Award.

I ask her about her most memorable project till date and she mentions her piece for Façade Festival produced by Burrard Arts Foundation (2019). “I wanted to create a work to honour Jyoti Singh, the young woman who was senselessly and brutally assaulted in Delhi in 2012 and died of her injuries, but I needed to work through my anger first. Seven years later, I finally had the platform, opportunity, and vision to tell her story in a way that would do it justice,” Johal explains. With the support of a local animator, she created a five-minute digital animation entitled “For Jyoti” which was projected onto the exterior façade of the Vancouver Art Gallery. “It told the story of Jyoti’s attack but ended on a note of hope and empowerment,” she adds. 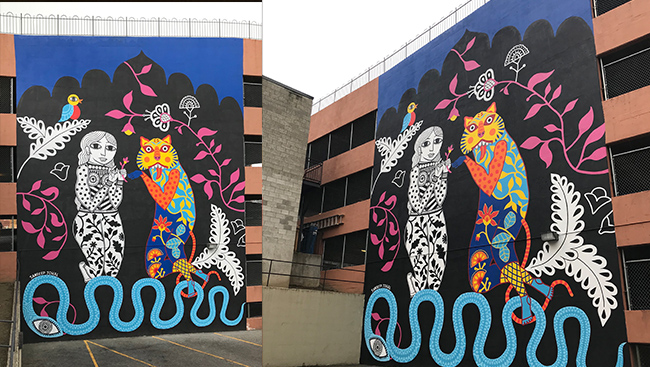 So how has the South Asian community responded to her work and her role as a female social artist? “I wondered whether people from the community would be critical of my work because I talk about things we need to change in our culture, especially around gender-based violence, but the reception has been overwhelmingly positive,” she answers, further adding, “I feel very supported and hope I can be a role model to the younger generation. I’ve also had the good fortune of working with Indian Summer Festival, Surrey Art Gallery, South Asian Fashion Week, and creating illustrations for Stories for South Asian Supergirls.” Stories for South Asian Supergirls is an illustrated collection of 50 biographies showcasing historical and modern day South Asian women’s stories and achievements.

On the topic of being a female artist, Johal believes the industry is more welcoming of different artists at present. “Historically, female artists have not been given the opportunities, resources, and support to develop themselves as artists and have often been excluded from art history. Today, that gender bias still exists. Female artists, especially female artists of colour, continue to be underrepresented and undervalued in galleries, museums, and auction houses. Things are changing, but change is slow.” As a Vancouver-based artist, Sandeep feels the city’s art sector will be in great trouble if the city doesn’t ensure the retention of art studios and spaces at affordable prices. “We have a high number of incredibly talented artists and can’t afford to continue losing them. We need secure spaces and ongoing arts funding otherwise Vancouver will become a cultural void.” 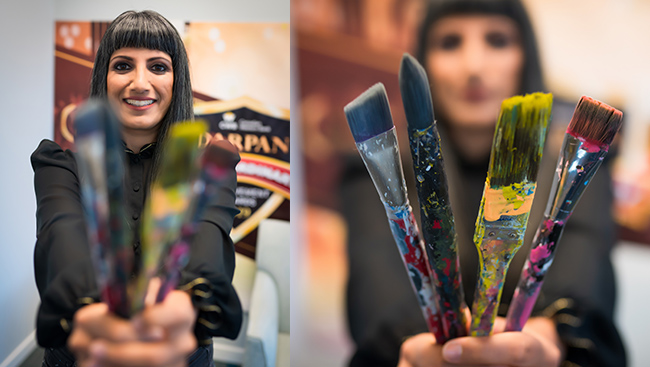 Johal is enjoying her career as a visual artist and looks forward to exploring more opportunities ahead. “For so long I felt the shame of failed potential and now I’m finally fully living my true purpose. What an absolute privilege it is to wake up every morning knowing I get to do the thing I love most – I get to make art, put it out in the world, and make a positive impact,” she expresses. She has been invited to do a 10-week residency at Burrard Arts Foundation in the fall, which will culminate in a solo show next year. “I’ll be creating my first series around motherhood, focusing on the “dark” side of motherhood. I want to create an open dialogue about the struggles of motherhood and speak candidly about my own,” shares Johal excitedly.

Her advice to young females truly serious about becoming an artist is to not listen to people who perpetuate the starving artist myth and not give up. “You’ve got to treat it like a job and show up every day. Work on your craft. Hone your skills. Find your authentic voice. Invest in yourself. Find a mentor. Being an artist is not easy. It requires focus, patience and perseverance but it’s absolutely possible to make a living from it,” she says in conclusion.

Being a woman today means using your voice to empower others to create positive change.

But as they say, yesterday’s home run doesn’t win today’s game. I am more interested in the future than the past.

Being strong, being the glue in a family who loves, forgives, lets go, and perseveres while looking out for and supporting others along the way.

A woman achieve her goals because she is compassionate, committed, understanding, and the most able multitasking person.

I been blessed to have had the most inspiring women in my life as mentors, guides, sisters, daughters and friends