It is always exciting driving a new model, and new is what I received with the 428i xDrive convertible/cabriolet. This model comes equipped with a hard folding convertible folding roof, which the people at BMW told me is very popular and weather resistant. Having owned a newer convertible a few years ago, I never had a problem with the roof leaking.

The 4-series cars come in a 4-cylinder or 6-cylinder versions and my test car was the 4-cylinder version that is equipped with all wheel drive. Getting the car moving is a turbocharger attached to the engine giving this 2L engine with a healthy 241hp. giving it a 0 to 100kph in just 6.5 seconds, which is pretty quick considering all the extra equipment needed for the folding roof. In hard acceleration the power came on fast and there was no real turbo lag. It seemed to take longer for the transmission to react than it did for the turbo to go into boost mode. As for the transmission, the 428i comes with an 8-speed automatic that was very smooth, making gear changes almost seamless. When called upon, the transmission down shifted quickly for brisk acceleration.

Speaking of folding roofs, I noticed that the hinges show on the folding roof. It was surprising, as the VW, which has a similar style roof, didn’t show the hinges. Even though the roof of the 428i is a little bigger, you might
expect cleaner lines. But, otherwise the car looked very sleek with the roof up or down.

However, one big disadvantage to this roof design is that it takes up trunk space. Due to the size of the roof, when it is folded down, it encroaches into the trunk quite a bit, leaving very little cargo space. Even in the raised position, the rails holding the roof in the stowed position also limit what you can put into the trunk. 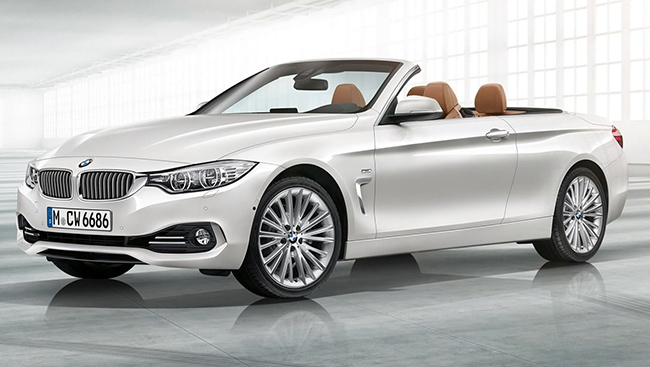 My white test car had the red coral leather interior, which to my eyes looked just fantastic. The seats were very comfortable and held the driver in place during hard cornering. Extensions from the bottom seat cushions added extra support for the legs which was great when I encountered heavy traffic while testing the car.

As you might expect from a BMW, dash layout was superb with all controls labelled well and all very easy to reach. Gauges were well placed and in easy view, no matter what seating position you might sit in. Back seat room was also adequate for a convertible.

My test car was priced at $59,900 which when one considers the options on this car, is very fair. The 428i is well worth a look if you are in the market for a truly great handling convertible with seating for four.