If you can look past the humdrum of a beige on beige sedan, the 2014 Volkswagen Jetta TDI Highline is a capable people carrier with good fuel mileage, a great dual-clutch automatic gearbox and driver controls that are refreshingly easy to use.

Of course, the vehicle is available in other colours, but my press vehicle featured the Moonrock Silver Metallic - a.k.a. champagne-paintjob with the Cornsilk Beige interior. While the colour combination may leave something to be desired, the Highline trim level gives the Jetta, dare I say, a mean exterior appearance. The 17-inch Queensland polished alloy wheels, foglights and integrated front bumper lip look fantastic.

The face of VW’s popular sedan has changed a lot throughout the last few generations, but the interior is one place that has thankfully stayed true to its simple German beginnings. In an era where turning on the fan can sometimes be as
challenging as programming the time on a VCR once was, things are straightforward in the Jetta cabin. A screen anchors the centre stack, with buttons on either side for audio, handsfree, navigation and system settings. Below, there are the familiarclimate dials and controls.

The Jetta isn’t all traditional on the inside, adopting the popular push button engine start found in many new cars. Curiously, though, the fob still looks the same as it has for a decade, complete with the flip-
out key.

Once you press the start button, the engine chugs to life with a bit of noise (it is a diesel after all). Unlike the Volkswagen’s base gasoline powerplant with the same displacement that made an anaemic 115 horsepower/125 lb-ft of torque, this 2.0-litre turbo engine pumps out 140 hp with a comparatively massive 236 lb-ft torque produced at a low 1,750 rpm. As a result the TDI pulls away from stoplights with pomp and circumstance, while maintaining an advertised fuel economy rating of 6.7 L/100 km in city driving and 4.7 on the highway (automatic). 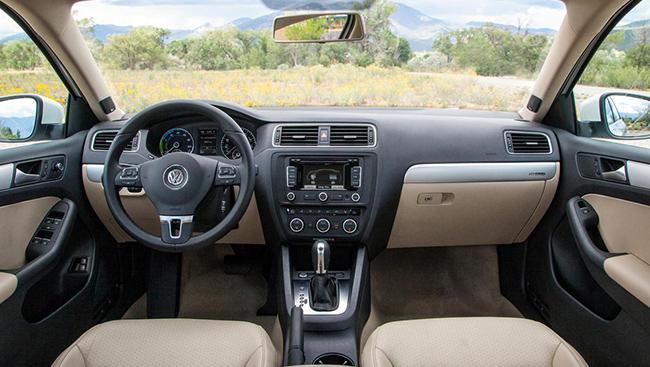 Shifting duties are optionally taken care of by the German manufacturer’s proprietary Direct-Shift Gearbox (DSG), blurring the lines nicely between auto and manual transmissions. Gear changes are quick and precise, and if you feel the need to take the reins you can bump the lever over from the “D” position to the bi-directional manual mode.

Although fully independent front/rear suspension is standard, the 1,434 kilogram TDI

Highline feels heavy when you’re driving it and exhibits understeering tendencies when you push it too hard in a corner. The ride is comfortable, however, and the four-wheel disc brakes stop the car sufficiently.

With the $1,570 Technology Package that adds a premium Fender sound system, backup camera and excellent navigation system, the 2014 Volkswagen TDI Highline I was driving tipped the price scale at $30,760.  That makes it one of the more expensive compacts when compared to competitors like the Toyota Corolla, Honda Civic, Mazda3 and Hyundai Elantra — a price you may have to pay if you’re after a European diesel with a great drivetrain.