To the British automaker’s credit, rather than releasing another shapeless SUV, this brand new model oozes inspiration from the other go-fast vehicles in the lineup.

With a rich heritage making uber-luxurious executive sedans and gorgeous sports cars, Jaguar has stepped a little out of its comfort zone by releasing the brand’s first ever crossover: the F-PACE.
To the British automaker’s credit, rather than releasing another shapeless SUV, this brand new model oozes inspiration from the other go-fast vehicles in the lineup.
“We designed the all-new F-PACE to be first and foremost a Jaguar. That’s why it has exciting proportions, a dynamic stance, pure surfaces and a beautiful sensuality about it. Its progressive, purposeful appearance has clearly been influenced by the F-TYPE. Every Jaguar car should draw your eye from 200 metres away and I believe the presence of the all-new F-PACE on the road is second to none in this class. The lightweight aluminum architecture gave us the design freedom to create a car with latent poise – a svelte car with attitude,” said director of design Ian Callum. 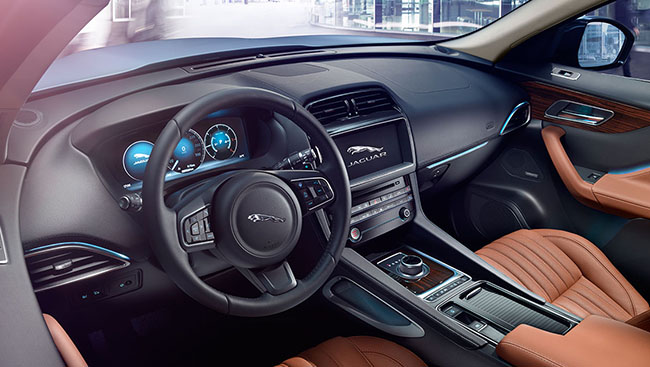 “It looks assertive yet not aggressive. But it’s also versatile and equipped with real-world answers to everyday questions. The all-new F-PACE is an all-weather Jaguar sports car, life-proofed for five people and their belongings.”
Usually when you take the idea of a coupe and stretch out the proportions – think Porsche Panamera – the results leave something to be desired. But here, everything has been balanced wonderfully. Attributes such as the sleek headlights, thin taillights lifted almost directly from the F-TYPE and a long 2,874-millimetre-long wheelbase gives the vehicle an athletic air without being overly bulky.

Equally as important as the exterior is the cabin, particularly the driving position. All too often in a utility vehicle, the driver is hoisted up too high making it seem as though he or she is in a bus. The F-PACE, however, features “Sports Command” seating where great visibility meets a racy feel. To achieve this, the top of the front doors wrap around onto the dashboard forming a cockpit-like space, and the available leather sports seat provide comfortable and supportive bolstering.
Due to a lightweight aluminum body and suspension system, intelligent all-wheel drive, and torque vectoring technology, the F-PACE is one of the best handling crossovers I’ve ever driven. I had the unique chance to autocross one briefly where it genuinely held its own twisting and turning around the cones. Did I mention the engine note is also amazing? Taking yet another page out from the company’s roadster playbook, a serious growl can be heard anytime you put your foot down. It’s certainly not as loud as the F-TYPE, but darned impressive for an SUV.

Speaking of the engine, power is generated in three ways, depending on the trim. The turbocharged 2.0-litre four-cylinder diesel makes 180 horsepower, while two versions of a supercharged 3.0 L V6 (yes, the same one as found in the F-TYPE) produce 340 and 380 horsepower, respectively. DARPAN tested the highest output model, which never left me wanting more.
Jaguar didn’t simply dip its toe into the populated crossover segment water – it kicked up a huge splash, accomplishing the rare feat of splicing sports car DNA into an SUV. If this is what the company’s attempt looks like, I can’t wait to see what’s next.

Calling the 2017 C63 S Coupe the “sportiest C-Class ever,” as Mercedes-AMG has done, is a big statement, as the outgoing version launched in 2011 wasn’t exactly a boxy slouch.

2017 Honda Accord Hybrid: Return of the two-motor hybrid

When the Honda Accord Hybrid burst onto the scene in 2014 with a classically handsome appearance and innovative two-motor design, it stood out in its class.

2017 Honda Accord Hybrid: Return of the two-motor hybrid

The 2017 R is built on the current generation Mk7 Modular Transverse Matrix (MQB) platform, shared throughout the Golf range and with subsidiary brands such as Audi, Seat and Skoda.

Last year, the Lexus Executive Sedan, or ES as most people know it, finally received a much needed injection of style following a significant refresh. The changes involve an exterior refresh, more interior luxury, and the addition of Lexus Safety System + technology suite.

Winter is not a friend to your car.

Construction of the new state-of-the-art dealership is set to start in 2018, with plans for completion in 2019.