MSRP: $44,020
Motor: 2.0-litre turbocharged four cylinder
Horsepower: 292 @ 5,500 rpm
Torque (lb-ft): 280 @ 1,800 rpm
Gearbox: Six-speed dual-clutch automatic
Layout: Front engine, all-wheel drive
Fuel economy: 10.6 L/100 km mixed city/highway (observed)
The Volkswagen Golf was one of the first vehicles associated with the term “hot hatch,” describing a breed of small, sporty, economical and fun-to-drive five-door cars. And while it still remains a great example of this, the model has gotten bigger and heavier over the years, losing some of that all-important mojo. Fortunately, the German automaker re-injected some life into the lineup by introducing the spicy Golf R.
The 2017 R is built on the current generation Mk7 Modular Transverse Matrix (MQB) platform, shared throughout the Golf range and with subsidiary brands such as Audi, Seat and Skoda. Appearance wise, there are a few fairly subtle modifications Volkswagen has made to differentiate from lower trims. 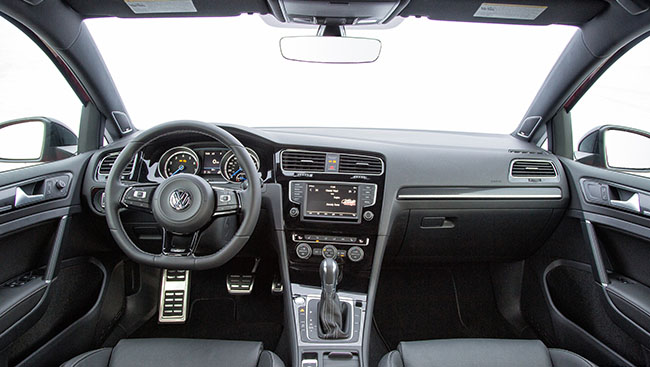 The front bumper, for instance, has a larger central air intake as well as brake cooling ducts carved into the sides. The bi-xenon headlamps feature an extra LED Daytime running light strip inside each housing, giving the vehicle a distinctive look when lit. Instead of regular alloys, huge 19-inch thin-spoke “Cadiz” wheels, shod in summer performance tires, fill the fenders. And, at the rear, quad exhaust pipes sit beneath a special black lower diffuser.
Design-wise, the interior is fairly standard save for some carbon fibre and stainless steel treatments given to select trim pieces; ambient door lighting, and small R logos scattered about.
To my amazement, the armrest attached to the centre console doesn’t open to reveal a storage cubby like it does in basically all other VWs. After struggling with it for several minutes, thinking I was having trouble locating a release latch, I did some further research. As it turns out, parts of the console in German-made Golf R (nearly all other Golfs are now made in Mexico) do not meet North American safety regulations, and so the armrest is permanently latched shut.

Finally, Volkswagen has introduced modern smartphone connectivity through App-Connect, part of its second-generation infotainment system. After plugging in a mobile device, users can listen to streaming music, respond to texts, and boot up navigation via Apple CarPlay or Android Auto.
The engine is an upgraded version of the turbocharged 2.0-litre four cylinder found in the GTI, making 292 horsepower and 280 lb-ft, compared to 210 hp and 258 lb-ft. Consumers can choose between a six-speed manual or six-speed DSG dual-clutch automatic transmission. Equipped with the latter, getting from 0-100 km/h only takes 4.5 seconds.

I was most impressed by how the vehicle essentially has two sides. When driving the speed limit, besides a faint intake sound when accelerating, it is as though you are behind the wheel of any normal A to B Volkswagen. Get on the throttle hard and/or make a spirited turn, however, and things come alive. The handling of the car feels very, very balanced, and a lot of that has to do with the Golf R’s permanent 4Motion all-wheel drive. Sensors detect wheel slippage moments before it actually occurs, and torque is distributed accordingly to where it is needed most.
For 2017, the Golf R comes in seven flavours: Pure White, Tornado Red, Lapiz Blue Metallic, Limestone Grey Metallic, Reflex Silver Metallic, Deep Black Pearl, and Onyx White Pearl.
Prev Next

Last year, the Lexus Executive Sedan, or ES as most people know it, finally received a much needed injection of style following a significant refresh. The changes involve an exterior refresh, more interior luxury, and the addition of Lexus Safety System + technology suite.

Winter is not a friend to your car.

Construction of the new state-of-the-art dealership is set to start in 2018, with plans for completion in 2019.

There are cars that are luxurious, and then there are luxury cars. An example of the latter? The 2016 BMW 750Li.

Even though the Infiniti Q50 luxury sports sedan came out only two years ago, the vehicle gets a pretty huge mid-cycle update for 2016.

Influenced by the 1970s “Jeans” Bug, its name tells the full story. The regular 2016 Beetle has undergone a thorough inside-out denim treatment to look and feel like your favourite pair of Levis.