Here are our top five all-wheel drive cars for the colder months ahead.

Winter, as they say, is coming. Fortunately for Vancouverites, our version is much milder than other parts of the country. Still, with above average rainfall during the colder months and pavement surfaces that occasionally become frozen, we can use all the traction we can get while behind the wheel. From slick sports cars to capable crossovers, DARPAN has compiled a shortlist of the best all-wheel drive (AWD) vehicles out right now, factoring in things like comfort and convenience, fuel economy, performance, and price.
2016 Lexus RC 350
If you want the safety of AWD and don’t want to sacrifice looks or speed, the RC 350 may be ‘The One.’ First introduced last year, the quick coupe returns featuring a standard F SPORT Series 1 bundle adding unique seats, alloy wheels, steering wheel, shift knob, and more. Backing up the mean appearance is a silky smooth 3.5-litre V6 engine producing 307 horsepower and 276 lb-ft of torque. To keep the nose always pointing in the right direction, the Lexus i-Four AWD setup utilizes an electronic centre differential to stabilize any wheel that starts to slip. 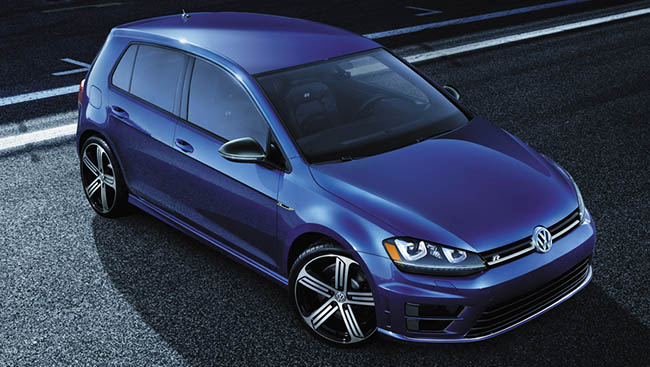 2016 Volkswagen Golf R
At a distance, it resembles any other hatchback that VW produces. But don’t be fooled, because the Volkswagen Golf R is most certainly a wolf in sheep’s clothing. The extra letter R attached to the badge represents the fastest production Golf the automaker has ever made. Boasting 36 more horsepower than the previous example, the current one makes 292 hp and 280 lb-ft of torque. Power is put down on the ground to all four wheels via proprietary AWD technology dubbed 4MOTION, ensuring proper grip regardless of road conditions.

2016 Honda HR-V
The HR-V is an early entry into the burgeoning subcompact crossover segment, which combines the practical benefits of a sport utility vehicle with the drivability of a car. Positioned in-between the Fit and the CR-V, this Honda can haul a full load of passengers and still have plenty of room leftover for whatever else. Although front-wheel drive is found in the entry-level trim, moving up a couple of steps on the ladder swaps in full-time AWD instead, all for under $25,000. In the city, the HR-V is manufacturer estimated to only consume 8.4 L/100 km of fuel.

2016 Hyundai Tucson
All new for 2016, the Tucson is a lot of automobile in a relatively small package. Benefitting from Hyundai’s contemporary design language, for instance donning a large signature hexagonal grille, sleekly shaped headlights and foglights, bigger wheels and class-appropriate rugged body cladding, the small athletic SUV appears to be ready for anything. Beneath its tough exterior is a refined cabin available with plush leather, heated and ventilated front seats and an improved navigation system responding to inputs nearly three times faster than before. All grades but the base receive all-wheel drive.

2016 Volvo XC90
Since the launch of the flagship luxury mid-size crossover in 2015, the XC90 has won all sorts of awards including the Automobile Journalists Association of Canada (AJAC) best SUV/CUV over $60,000, and the Insurance Institute for Highway Safety (IIHS) Top Safety Pick+. What some people may not know is that the Swedish company is leading the way in tech as well, proven by the massive in-dash touchscreen replacing virtually all physical knobs and switches. The electronically controlled AWD is equally advanced – an onboard computer monitors tire grip up to 100 times a second, gathering information such as wheel rotation speed, engine speed and torque levels, and throttle status.
Prev Next

A bold claim for sure, but the Town and Country replacement does boast over 100 available safety features, a rear seat theatre, hands-free doors and liftgate, and a segment-first hybrid model. Let’s take a closer look at all the changes and innovations.

Once you fire up the motor, you won’t remember, or care, how the inside looks. Side note: a friend of mine who owns an M4 came along for a ride and pointed out a neat detail of how the start button is angled towards the driver, which reinforces the driver-focused nature of the car.

This turbocharged crossover hits the ground running poised to compete with current heavy hitters in the segment that include the Audi Q5, BMW X3 and Lexus NX, Range Rover Evoque and Lincoln MKC, to name a few.

The TLX is pulling double duty, filling the shoes of both the former TSX and TL after Acura decided to trim some of the fat from its four door offerings. In terms of appearance, the vehicle looks more like a shrunken-down TL, measuring nearly 100 millimetres shorter in comparison, than an evolution of the TSX.

If the Lexus portfolio of vehicles were to take a class photo, the CT 200h would be the shy smart...