If the Lexus portfolio of vehicles were to take a class photo, the CT 200h would be the shy smart kid standing to the side. I say that because the hybrid sometimes gets overshadowed by its bigger and faster gasoline-chugging peers, but this green hatchback is chock full of smart engineering and affords a lot of bang for the buck.

Back in 2014, the CT experienced a fairly significant overhaul, centered aesthetically on the inclusion of a proper all-important Lexus spindle grille found now on all of the company’s products. Granted, it’s a restrained version compared to ones seen on, say, a RC F sports coupe. For those not familiar with the lingo, I’m talking about the large pinched-in trapezoidal frame encompassing both upper and lower bumper openings up front.

The current model year is much more conservative in terms of alterations, the only key difference being an additional available F SPORT Series 2 upgrade package that adds-on extra comfort and convenience options such as a navigation system, driver’s seat memory adjustability, garage door opener, etcetera. 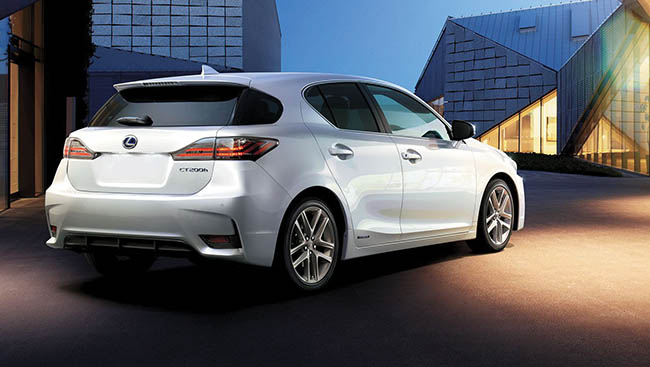 DARPAN’s press vehicle for the week didn’t include said package, instead coming in the Special Edition trim (+$6,300) boasting its own high-end bells and whistles – for example LED head and foglights and rain-sensing windshield wipers – but surprisingly no navigation system. The paint colour we got was a beautiful Nebula Grey Pearl featuring a contrasting black roof and the SE-specific gloss-black-painted door handles that, in my opinion, breaks up the visual cohesiveness and cheapens the car’s image.

The CT is given a look and feel of being close to the ground to emphasize a sporty aura for the partially electric hatch. A relatively low roofline translates into cosier interior space, and at 989 millimetres of headroom for the driver, the top of my hat brushed up against the headliner while sitting behind the wheel.

There are some neat treatments in the passenger compartment I enjoyed, like the fighter jet joystick transmission selector, and seat warmer controls offering an incredible eight temperature settings.  What I didn’t care for so much, however, were the over-the-top two-tone red and black leather seats.

As far as hybrids go, the driving experience is above average. The redesign endowed the car with increased body rigidity and upgraded suspension to enhance the level of handling and lessen NVH (noise, vibration and harshness). Providing power remains the combination of a 1.8-litre Atkinson Cycle four-cylinder engine, high-torque electric motor and battery together good for a net 134 horsepower. 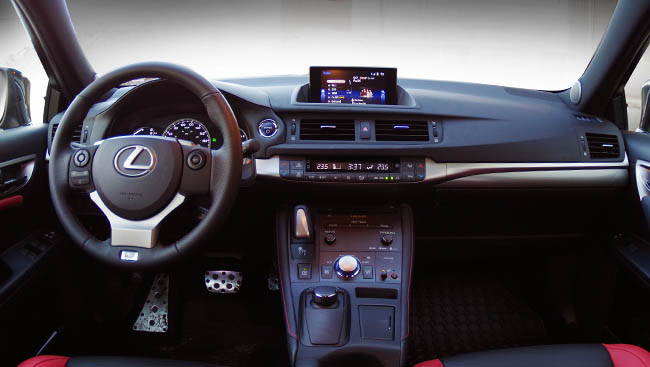 Users can select from four Lexus Hybrid Drive modes: Normal, Sport, Eco and EV, each altering performance dynamics in a different way. EV allows limited travel at moderate speeds on primarily electricity, and Sport prioritizes throttle response, although it’s questionable whether the extra noise of the CVT or questionable performance gain of the latter is worth any sustained use. I mostly stayed in the Normal and Eco modes for the purposes of testing, and in doing so achieved a stellar 6.0 L/100 km fuel consumption over roughly 350 kilometres in mainly city driving.

Before we get started, let me address a point of possible confusion. Although Mercedes-Benz&rsquo...

The Fuel-efficient SUV To my disappointment as a gearhead residing in Canada, diesel variants...

Roadster gets racier If you haven’t been behind the wheel of a Miata in awhile, or ever...

“EcoRun is a great annual event that shows off a variety of eco-friendly vehicles, and this year’s fifth instalment there’s 27 participating in this showcase run from Toronto to Ottawa via Bellville and Kingston. It’s great way profile green technology and to raise awareness,” said Mark Taylor, deputy mayor of Ottawa during the closing presentation outside city hall in the nation’s capital.

As cool as the outside is, the cabin is really where the magic happens. One of my passengers commented on how plush and un-truck-like the interior is, and I’m inclined to agree, though I will say most examples in the market today have really stepped up their game in this department.

For the 2016 model year, there are numerous styling updates such as an even bigger grille featuring a different mesh pattern, J-shaped LED daytime running lights embedded in the headlight housing unique to the XJ, chrome air blades in the lower front bumper air intakes, and re-sculpted LED rear taillights.