Take everything that’s great about the current fourth generation “ND” (chassis code) Miata, throw in a folding power hardtop with a sloping roofline and you’ve got the 2020 Mazda MX-5 RF, short for Retractable Fastback.

Like the soft-top version, the SKYACTIV-G 2.0-litre engine was tweaked by headquarters last year to squeeze out an additional 26 horsepower, for a total of 181. And although the total torque has only increased three lb-ft, from 148 to 151, the curve is more robust equalling an enhanced driving experience. 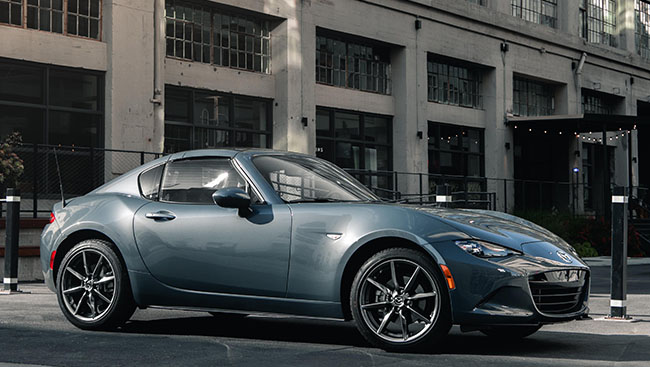 The cost of all the upgrades? A modest $1,000 price bump for the base GS-P, and $850 for the GT model. The latter gives customers a choice of an Exclusive Package (+$900) bundling a contrast piano black roof and grey-stitched nappa leather seats, or a Grand Sport Package (+$3,600) tossing-in Brembo front brakes, 17-inch BBS forged aluminum wheels and matching piano black side mirrors.

Although the RF is slightly portlier than the standard MX-5, our manual transmission tester weighing in at 51 kilograms heavier, the extra mass isn’t too noticeable. Certainly not as much as the dreadful blind spots caused by the targa top, however thankfully a blind spot warning system is installed on all trims. 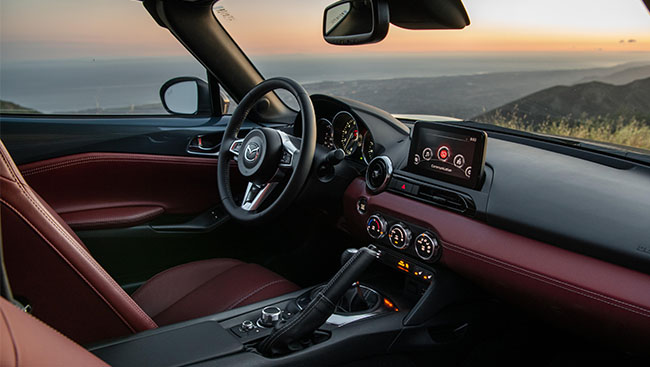 The vehicle remains as toss-able as ever, and is no doubt the model in the lineup best representing Mazda’s Japanese slogan of “Jinba Ittai,” or oneness between horse and rider. Cornering is nearly a subconscious act, the new Miata seemingly predicting and executing steering inputs effortlessly. Yes, it’s that good.

Most people won’t notice the power boost, which doesn’t really become evident until you reach the maximum redline now stretched to 7,500 (vs. 6,800 before). At higher RPMs the motor definitely breathes better.

While the majority of the changes are found in the engine bay, a few enhancements have been implemented elsewhere as well. The door mechanisms, cup holders, seat levers and steering wheel are redesigned, as is the telescoping function on the steering wheel to give 42 millimetres of travel. 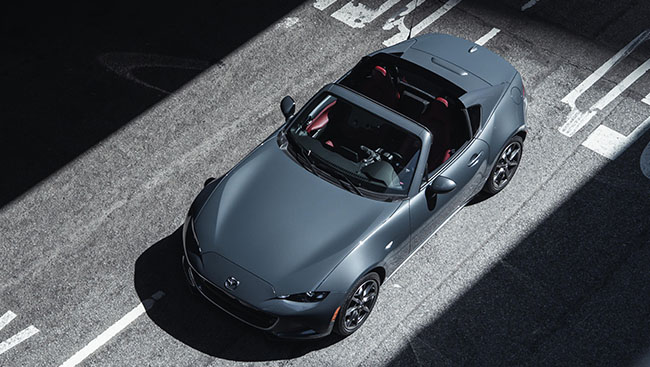 In terms of downsides, the story is largely the same as the regular variant. Forget about carrying much more than a couple of bags in the trunk, and a small cubby behind the centre console replaces a traditional glove box. The electric hardtop also takes a lot longer to put away than the manual soft top — a full 13 seconds — and can’t be done at speeds greater than 10 km/h, considerably slower than other convertibles. At least in the stowed position it doesn’t intrude into the cargo area like a BMW.
But hey, the silhouette is dead sexy, especially sprayed in the optional $200 Polymetal Grey Metallic paint, and the RF makes the MX-5 truly capable of handling all four seasons with ease. The 2020 Mazda MX-5 GS starts at $40,100.