Subcompact crossover gets a boost

Originally launched to fill the apparent gap between the CX-3 and CX-5 SUVs, the CX-30 made its debut in 2019. Less than two years later, the Hiroshima-based manufacturer has already implemented a big change for the subcompact crossover: adding the availability of its SKYACTIV-G 2.5 Turbo motor to the grade-topping GT trims.

First powering larger examples such as the Mazda6 and CX-9, the boosted four-cylinder mill is trickling down into smaller vehicles and having a significant impact on performance. Delivering up to 250 horsepower and 320 lb-ft of torque when filled with premium 93 octane fuel (227 horsepower/310 lb-ft regular), a six-speed automatic transmission takes care of the shifting duties.

Unlike on other certain models, clicking the Sport Mode button below the shifter actually creates a noticeable improvement. Rather than just creating a lot of low gear engine whine, activating the setting makes the throttle application a whole lot livelier, which meant my onramp merges became a whole lot more fun. 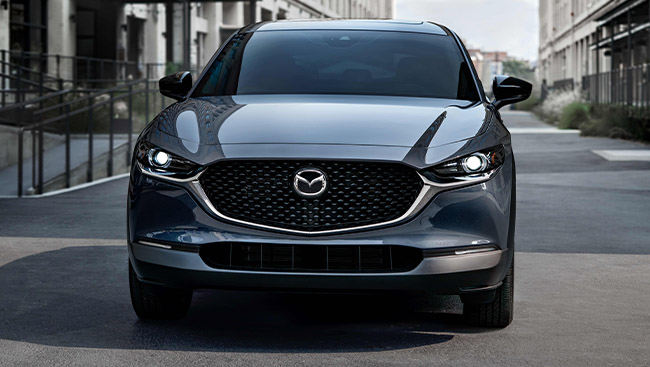 Though many will probably use the CX-30 in urban settings, the diminutive crossover is built to occasionally tackle the route less travelled. The company’s lauded i-ACTIV all-wheel drive is standard and features Off-Road Traction Assist. Turning the latter on recalibrates the AWD and traction control systems to help minimize slippage.

Even if you’re not in the backcountry and say just on a slick roadway with some loose gravel, the computer can detect which wheels are unloaded and cause them to brake, thus sending torque to the ones that are gripping the ground.

As all contemporary Mazdas do, the CX-30 Turbo has G-Vectoring Control Plus (GVC+) equipped. Though not something the average driver would notice, it means this technology designed to be subtle is doing its job. Basically, whenever entering a turn GCV adjusts power output slightly to cause a shift of weight to the front axle to make cornering feel more natural. The + throws in light braking to the outer wheels coming out of the turn for increased stability.

Since the optional engine upgrade is the focal point for the 2021 offering, exterior enhancements are kept to a minimum. And that’s just fine as the CX-30 is already quite the looker boasting a 3-D black mesh grille with metallic surround, low slung silhouette and black underbody cladding adding a touch of ruggedness. 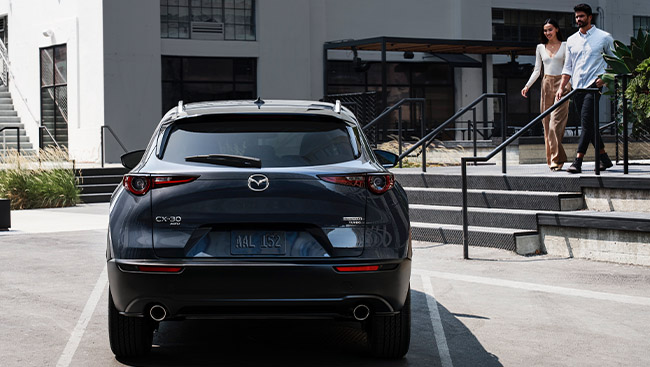 There’s not really anything bad to say other than the single rotary Commander Knob remains slightly annoying when changing radio stations, and though it’s technically classified as an SUV, cargo volume is only rated at 572 and 1,280 behind the second and first rows, respectively. Still, as a daily driver and even acting as a sole vehicle in the household, the 2021 CX-30 Turbo would be a great choice for most.